Every(Re)Action | 5 Takeaways from the 2022 M+R Benchmarks 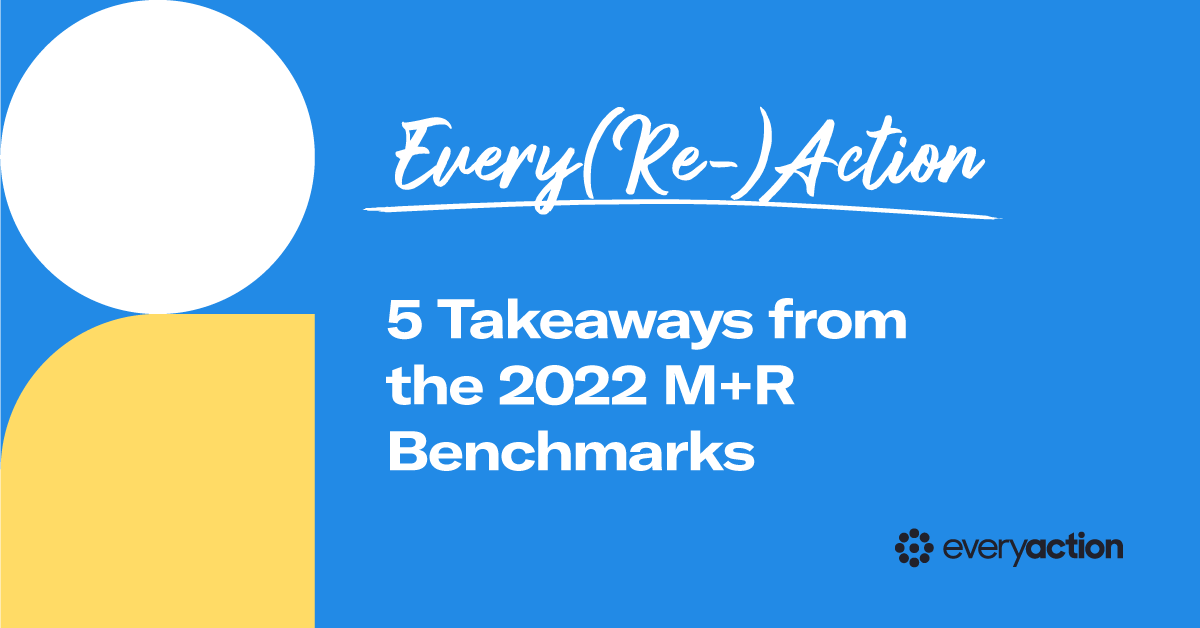 If you’re a nonprofit fundraiser, digital strategist, or communications specialist, you know spring is M+R Benchmarks season—and there’s plenty to be excited about in this year’s report.

Below are our five biggest takeaways from this year’s report—and ways nonprofits can take action based on the findings.

Email list sizes grew in 2021—but other metrics had more interesting stories.

One of the main headlines for email-related findings was that list sizes grew by 7 percent in 2021—a small increase over the growth from 2019 and 2020. The response rate for nonprofit advocacy emails also went up by 4 percent from 2020.

Despite this list growth, nonprofits sent slightly (1 percent) less email to subscribers than they did in 2020. Fundraising email metrics specifically also decreased: the amount raised from every 1,000 fundraising emails dropped (-3 percent) in 2021, as did the average response rate to fundraising emails (-11 percent.)

One of the most interesting elements of this year’s Benchmarks was the discussion around what caused the 16 percent increase in average open rate across all email messaging. As M+R explains it, tech juggernaut Apple’s email privacy update could be a driving force behind these changes:

Notably, response rates did not follow this trajectory—they remained basically flat over the same period. And if we look at 2020 for comparison (in case it’s something about November that influences the numbers, maybe a GivingTuesday effect), we do not see a corresponding spike in open rates.

All that being said, M+R cautioned that Apple’s update likely wasn’t behind 100 percent of 2021’s email open rates increase. Ultimately, they drew the conclusion that a change in metrics like this means it’s important to recognize the limits of what open rates can tell you about your email program—and we have to agree.

M+R’s text message-related findings were slim, but noted that mobile lists grew by 5 percent in 2021. As it’s still an emerging channel, we’re hopeful that more nonprofits experiment with mobile messaging, and take initial steps like building an opt-in list if they’re not already using it for fundraising and engagement.

Take action: even with a 1 percent decrease in email sent for 2021, nonprofits sent a lot of email last year—organizations on our platform broke our single-day email send record twice during end-of-year, once on GivingTuesday and once in December! At the same time, it’s important to avoid flooding subscribers’ inboxes. Targeting and segmenting your audience can help—and so can tools like EveryAction’s Machine Open Tracking functionality, that help you identify which opens come from human subscribers.

M+R found that total online revenue grew by 3 percent in 2021, while the number of gifts increased by 5 percent. The Fundraising Effectiveness Project also found (using a different data set) that total revenue raised by nonprofits grew slightly in 2021. Although these percentages are low, they come after “extraordinary revenue growth” in 2020. M+R describes this finding as “essentially consolidating the big spike in giving that nonprofits experienced during the first year of the pandemic[…] the upshot is that the average donor gave more times in 2021 than in 2020, and those gifts were on average worth more.”

Another important fundraising-related finding for 2021? Monthly giving increased by 24 percent, while one-time revenue declined slightly (-1 percent.) In fact, monthly giving made up 22 percent of all of 2021’s online revenue! Of course, not all nonprofits followed this trend—some, like cultural nonprofits, actually grew their one-time gifts; donors increased the average size of their one-time gifts from $111 to $125. M+R also calls out that a full quarter of all 2021 online revenue was received in December, meaning one-time gifts definitely aren’t going away anytime soon.

Despite one-time gifts’ staying power, monthly giving has long been lauded as a predictable, sustainable way for nonprofits to raise money to fund their mission. With the average monthly gift increasing from $24 to $25, it seems there’s an emerging trend of donors willing to increase their commitments and honor them on a regular basis. Recurring giving can also be a useful strategy for retaining donors—another area of focus for many organizations. The Benchmarks found that “donors who made their first online gift in 2020 were retained at a rate of 23 percent[, and] for prior donors—defined as those who had given at least once before 2020, and again in 2020—the retention rate was 60 percent.”

It makes sense that the longer a donor’s relationship with a nonprofit, the likelier they are to be retained—but this finding also emphasizes something fundraisers have long known about retention: the importance of getting the second gift. Stewarding new donors across channels, welcoming them to the donor community, and leveraging your nonprofit’s assets (like your digital strategy) to continue educating them about your work, can help you build an authentic, mission-centric connection and ensure they donate year after year.

Take action: given the major demographic shift happening across nonprofits’ donor audiences, retention has been top of mind for years—and that isn’t changing. Download our Guide to the Future of Fundraising to learn how technology can help nonprofits adapt their fundraising strategy to the demands of the moment.

For every 1,000 email addresses, nonprofits had an average of 736 Facebook fans, 229 Twitter followers, and 141 Instagram followers—but other, newer platforms are earning nonprofits’ interest: 23 percent of nonprofits in this year’s Benchmarks were on TikTok.

100 percent of nonprofits in this year’s Benchmarks reported being active on Facebook, which makes sense as it’s not a new platform. However, follower growth on Facebook was slow compared to other networks: nonprofits’ Facebook audiences only grew by 1 percent, while they grew by 5 percent on Twitter and 25 percent on Instagram, respectively.

This slow growth on established networks might encourage some organizations to try new platforms—especially those whose work can be captured in many formats and shared with audiences who spend their time in different channels. Ultimately, nonprofits’ goal should still be to engage supporters efficiently across channels by running tests, letting your test data fuel your strategy decisions, and tracking your audiences’ social media activity in your CRM to make that information actionable in all your campaigns.

Next step: whether it’s on or off TikTok, nonprofits looking to raise funds, educate followers about their cause, should consider experimenting with video—with the right tone and voice, the Lilly Family School of Philanthropy has found it can engage donors more effectively than a written appeal alone; and video agency Tectonic has found that effective nonprofit videos are simple and not overly-produced.

Membership-related revenue dropped in 2020, but “rebounded powerfully” in 2021 with an 81 percent year-over-year increase. This was accompanied by high levels of success with membership email messaging, especially compared to fundraising messaging.

M+R frames membership as “the type of donation that comes with tangible benefits,” such as museum access or a premium (a gift, like a tote bag.) The messaging used to promote these offers saw elevated levels of success in 2021: “for nonprofits that send both membership offers and non-member fundraising email,” the Benchmarks say, “membership messaging performed better across every single metric” M+R tracks:

This isn’t to say that nonprofits should abandon all fundraising messaging in favor of membership messaging—as M+R points out, fundraising and membership audiences aren’t identical, and it can be costly for nonprofits to fulfill a premium or membership promise in exchange for a donor’s gift. That said, Nonprofit PRO and our partner, Erica Waasdorp, have reported before that many donors feel material premiums matter less than access to other benefits. This could also be a smart financial choice for nonprofits: instead of offering to mail donors a water bottle or something similar, offering “exclusive content and access to people in the organization does not have to cost much and [those benefits are] a lot easier to create.”

Next step: donors want clear benefits in exchange for their gift—so it could be worth it to apply that lens to your fundraising programs. For example, data from our friends at Network for Good (who, like us, are also becoming Bonterra!) suggest that nonprofits should try treating your sustainer program like a subscriber program, where you offer monthly recurring donors program updates or other exclusive information in exchange for their gift.

The future is mobile. (Kind of.)

In 2021, 54 percent of traffic came from mobile devices. This finding is not surprising as it’s a continuation of a multi-year trend toward increased nonprofit web traffic coming from mobile devices. However, desktop traffic reversed a multi-year trend of declining and increased by 14 percent, making up the remaining 46 percent of traffic. It’s interesting—M+R describes that increase in desktop traffic as a “sharp U-turn” change, and it’s not clear what specifically is causing it.

One priority for nonprofits aiming to raise more in online revenue is “find[ing] ways to close the gap and increase conversion and average gift rates for mobile users,” says M+R. One tried-and-true tactic that could help is utilizing pre-filled forms: through our FastAction network, which stores donor data to save them time on repeat gifts, we’ve found that a donor is nine times likelier to convert on a pre-filled form than a blank one. Other tactics, like using a sustainer upsell lightbox to encourage donors to convert a large one-time gift into a smaller recurring gift, can also help organizations increase donors’ lifetime value and meet their long-term fundraising goals.

Next step: the findings are clear—nonprofit web pages of all types need to be optimized for a mobile-heavy audience. Check out our case study to learn how Equality Florida collaborated with our partner 4Site Interactive Studios to ready their digital presence for mobile viewers!

Planning, tracking, and analyzing your nonprofit’s digital campaign performance shouldn’t require more work. Read the full Benchmarks report, and even benchmark your own organization, at https://mrbenchmarks.com/, and get a demo of EveryAction to learn how the right nonprofit platform can help you get the most out of your strategy.