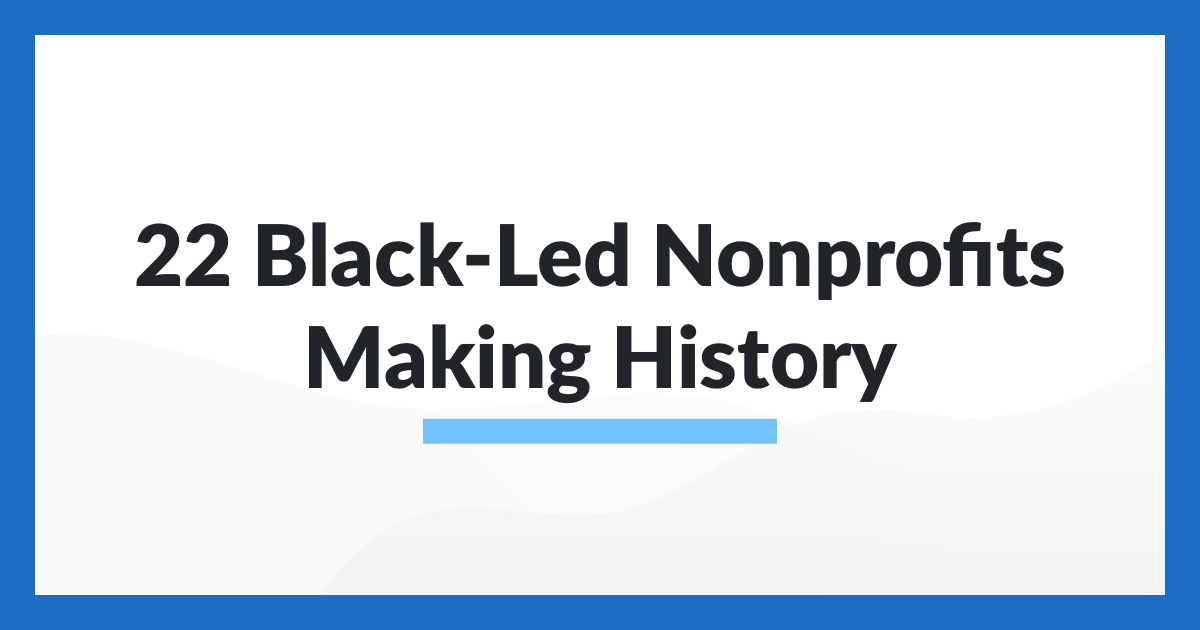 The origins of Black History Month can be traced back to its roots in the early 20th century. The Association for the Study of African American Life and History (ASALH), founded in 1915 by historian Carter G. Woodson and prominent minister Jesse E. Moorland, first sponsored the national Negro History Week in 1926. Several decades later in 1976, President Gerald Ford officially recognized Black History Month and called upon the public to “seize the opportunity to honor the too-often neglected accomplishments of black Americans in every area of endeavor throughout our history.” In honor and celebration of Black History Month, we’ve rounded up 22 local and national Black-led nonprofits that serve and empower the Black community all year round.

The African American Leadership Forum (AALF) is comprised of over 1,500 African Americans who self-identify as Thought Leaders, Influencers, Builders, and Ambassadors. Collaboratively, these leaders volunteer their time, talents and treasure to build a just society that works well for everyone.

The African American Roundtable at CLGS (AART) seeks the full inclusion of black lesbian, gay, bisexual, queer and transgender people in communities of faith and the mobilization of black communities of faith in support of social justice for LGBTQ people by fostering dialogue about the intersections between faith, gender and sexuality among black church and faith leaders (including scholars of religion), among black church congregations, among black LGBTQ persons and between each of these constituencies.

3. Association for the Student of African American Life and History

Established on September 9, 1915 by Dr. Carter G. Woodson, we are the Founders of Black History Month and carry forth the work of our founder, the Father of Black History.

We continue his legacy of speaking a fundamental truth to the world–that Africans and peoples of African descent are makers of history and co-workers in what W. E. B. Du Bois called, “The Kingdom of Culture.” ASALH’s mission is to create and disseminate knowledge about Black History, to be, in short, the nexus between the Ivory Tower and the global public. We labor in the service of Blacks and all humanity.

Black Girls CODE is devoted to showing the world that black girls can code, and do so much more. By reaching out to the community through workshops and after school programs, Black Girls CODE introduces computer coding lessons to young girls from underrepresented communities in programming languages such as Scratch or Ruby on Rails. Black Girls CODE has set out to prove to the world that girls of every color have the skills to become the programmers of tomorrow. By promoting classes and programs we hope to grow the number of women of color working in technology and give underprivileged girls a chance to become the masters of their technological worlds.

The Black Lives Matter Global Network is a chapter-based, member-led organization whose mission is to build local power and to intervene in violence inflicted on Black communities by the state and vigilantes.

The goal of the Black Male Voter Project is simple. We are building a movement that encourages black men to regularly and actively engage in the voting and electoral process. Since the foundation of the United States, black men and women have faced barrier after barrier to achieving voting equality.

7. Black Organizing for Leadership and Dignity

BOLD (Black Organizing for Leadership and Dignity) is a national training intermediary focused on transforming the practice of Black organizers in the US to increase their alignment, impact and sustainability to win progressive change. BOLD carries out its mission through training programs, coaching and technical assistance for BOLD alumni and partners.

BlackPAC is an independent, Black-led organization that uses the power of year-round political engagement and elections to change our economic, justice, and political systems. Since its founding in 2016, BlackPAC has helped galvanize Black voters to the polls to elect Governors, Lt. Governors, Attorney Generals, US Senators, and State Legislators.

Black Women for Wellness believes in the strength and wisdom of our community and allies. We believe that we have the solutions, resources and responsibility to create the shifts and change needed to impact our health status. Each of us must develop our personal power, hold accountable and support acknowledged leadership, and most importantly, contribute to our survival and growth as a community.

Black Women’s Blueprint, Inc. is a civil and human rights organization of women and men. Our purpose is to take action to secure social, political and economic equality in American society now. We work to develop a culture where women of African descent are fully empowered and where gender, race and other disparities are erased. We engage in progressive research, historical documentation, support movement building and organize on social justice issues steeped in the struggles of Black women within their communities and within dominant culture.

The Center for Black Equity (CBE) is an institution committed to supporting leaders, institutions and programs for health, economic and social equity for LGBT people of African descent. CBE seeks to promote a multinational LGBT network dedicated to improving health and wellness opportunities, economic empowerment, and equal rights while promoting individual and collective work, responsibility, and self-determination. Since the CBE’s founding in 1999, members have examined and taken positions on the fundamental issues of the day – health, human services, education, social, economic, and equality related issues.

The CBC PAC works to increase the number of African Americans in the U.S. Congress, support non-Black candidates that champion our interests, and promote African American participation in the political process.

Higher Heights is the only national organization providing Black women with a political home exclusively dedicated to harnessing their power to expand Black women’s elected representation and voting participation, and advance progressive policies.

The mission of the National Association for the Advancement of Colored People (NAACP) is to secure the political, educational, social, and economic equality of rights in order to eliminate race-based discrimination and ensure the health and well-being of all persons.

National Action Network is one of the leading civil rights organizations in the Nation with chapters throughout the entire United States. Founded in 1991 by Reverend Al Sharpton, NAN works within the spirit and tradition of Dr. Martin Luther King, Jr. to promote a modern civil rights agenda that includes the fight for one standard of justice, decency and equal opportunities for all people regardless of race, religion, ethnicity, citizenship, criminal record, economic status, gender, gender expression, or sexuality.

The National Black Justice Coalition (NBJC) is a civil rights organization dedicated to the empowerment of Black lesbian, gay, bisexual, transgender, queer and same gender loving (LGBTQ/SGL) people, including people living with HIV/AIDS. NBJC’s mission is to end racism, homophobia, and LGBTQ/SGL bias and stigma. As America’s leading national Black LGBTQ/SGL civil rights organization focused on federal public policy, NBJC has accepted the charge to lead Black families in strengthening the bonds and bridging the gaps between the movements for racial justice and LGBTQ/SGL equality.

The National Congress of Black Women, Inc. (NCBW) is a (501) (c) (3) nonprofit organization. NCBW serves as a nonpartisan voice of advocacy on issues affecting the appointment of women at all levels of government with a goal to increase participation of women of color in the educational, political, economic, and social arenas.

The Samuel DeWitt Proctor Conference, Inc. (SDPC) represents a cross section of progressive African American faith leaders and their congregations in the United States. Founded in 2003 as a 501(c)(3) organization, the SDPC was called into being to continue the rich legacy of the faith community’s engagement in issues of human rights and social justice.

Since 2017, Black Visions Collective, has been putting into practice the lessons learned from organizations before us in order to shape a political home for Black people across Minnesota. We aim to center our work in healing and transformative justice principles, intentionally develop our organizations core “DNA” to ensure sustainability, and develop Minnesota’s emerging Black leadership to lead powerful campaigns. By building movements from the ground up with an integrated model, we are creating the conditions for long term success and transformation.

Black Visions Collective envisions a world in which ALL Black Lives Matter. We use the guidance and brilliance of our ancestors as well as the teachings of our own experiences to pursue our commitment to dismantling systems of oppression and violence. We are determined in our pursuit of dignity and equity for all.

Reclaim the Block began in 2018 and organizes Minneapolis community and city council members to move money from the police department into other areas of the city’s budget that truly promote community health and safety. We believe health, safety and resiliency exist without police of any kind. We organize around policies that strengthen community-led safety initiatives and reduce reliance on police departments. We do not believe that increased regulation of or public engagement with the police will lead to safer communities, as community testimony and documented police conduct suggest otherwise.

Color of Change is a nonprofit civil rights advocacy organization. They work for civil justice by championing progressive solutions and policies.

Formerly known as Action PAC, the Grassroots Law Project is a political organizing force working to combat racism and bigotry in the United States. 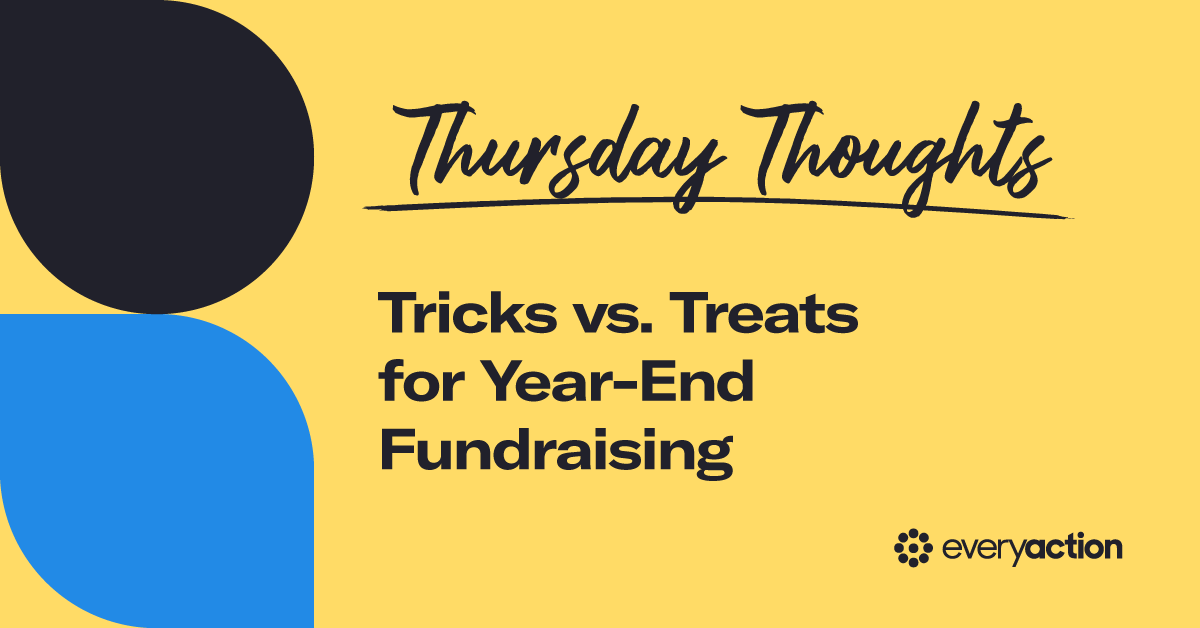 Thursday Thoughts: Tricks vs. Treats for Year-End Fundraising
Halloween is coming up, and so is year-end — which nonprofit fundraising tactics are…
Read more 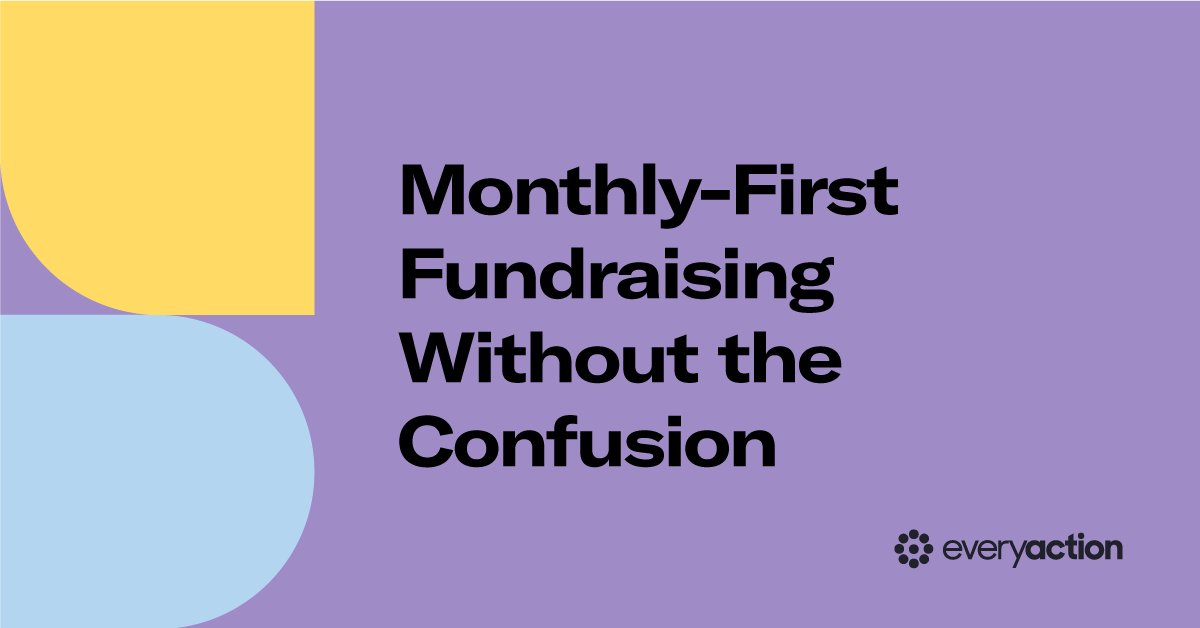 Every(Re)Action | 88 Percent of Affluent Households Gave in 2020, Social Justice Motivation Grew Slowly
Affluent households gave at high rates in 2020, and report slowly-increasing motivation from social…
Read more
We use cookies on our website to give you the most relevant experience by remembering your preferences and repeat visits. By clicking “Accept”, you consent to the use of ALL the cookies. However you may visit Cookie Settings to provide a controlled consent.
Cookie settingsAccept
Manage consent