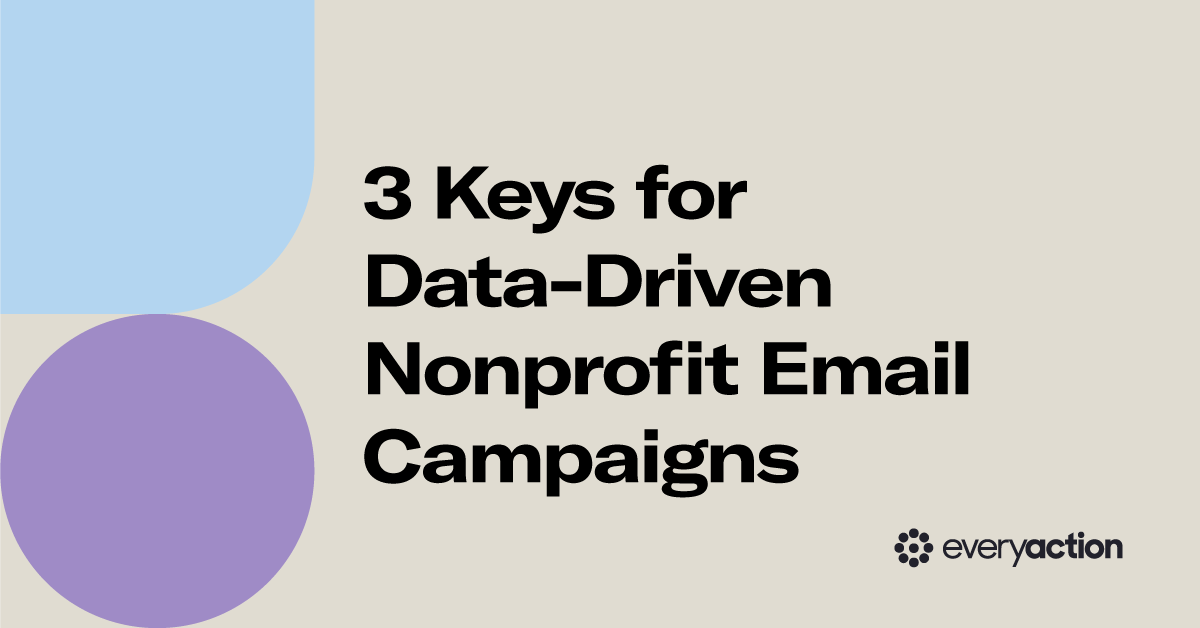 Year after year, nonprofits rely on email as an important fundraising and engagement channel. That’s why it’s so important to use data to drive your email campaign decisions and measure your successes to make sure your efforts are paying off. We asked senior product manager John Ryan for tips on running a data-driven nonprofit email campaign—here’s what he said.

Q: What are some steps my nonprofit can take to run a data-driven email campaign?

A: I’d say three things are really important: setting your goal, understanding your open rates, and tracking other metrics to know if you’re succeeding.

The first thing to do is set (and understand) your goal. Are you running this email campaign to educate an audience about your issue? Do you want to drive traffic to your website? Is your goal to grow your newsletter subscribers, or collect petition signatures, or raise more money? Who are the audience segments you want to target with this campaign? It’s important to set a goal that is focused, so you can measure and understand how well your emails are performing.

No matter your goal, email’s proven itself to be a strong channel for messaging supporters—in their Benchmarks report released in 2021, M+R found that email’s open rates, click-through rates, response rates, and page completion rates all rose in 2020, while unsubscribe rates went down. In 2021, nonprofits on our own platform broke our single-day email send record on GivingTuesday—and then broke it again about a month later during the peak of year-end season. Long story short, we know this is a channel that has a lot of potential; nonprofits just need to set the right goal and know how to measure their success.

Once you’ve set your goal and sent your emails, it’s important to understand who’s opening them, since many of us have historically used open rates to measure early success and make email campaign decisions—and since Apple’s email privacy update affects email opens, it can also affect the way we make those decisions.

Essentially, Apple’s Mail app across all of their devices is now automatically marking email as opened whether the human who owns the device reads it or not. This means many organizations have been seeing artificially-inflated open rates, which makes it harder for staff to understand who’s actually opening and engaging with email.

Here at EveryAction, our solution was to create a second, separate metric, called Machine Opens. What this does is segment out the Apple machine opens that a human wasn’t responsible for into that separate Machine Opens metric, leaving you with a more accurate open rate. This means your open rate may look lower than you’re used to, but that’s because it’s more accurate—and more useful.

For example, if you’re doing an A/B test on subject lines, and you’re looking to see which one is increasing your open rate, the open rate you see in EveryAction can now tell you who we consider to be actual people opening your emails. Since you now have that more reliable open rate, you can make more informed decisions about other aspects of your campaign.

Although open rates are useful for some decisions, it’s important to track other metrics too, like clicks and conversion rates.

For many of us running email campaigns, clicks and conversions are the real goal. When we say converting, we usually mean that someone successfully takes an action you want them to take, whether it’s making a donation, signing up to volunteer, or sending a message to Congress. Email might be the channel you’re using to send your audience a message, but you’re sending them those messages in order to prompt them to click on your call-to-action in order to convert, or take the action you want. That’s why focusing on these metrics is the most important thing for almost any email campaign, especially when it comes to measuring the long-term success of your campaign and your overall email program.