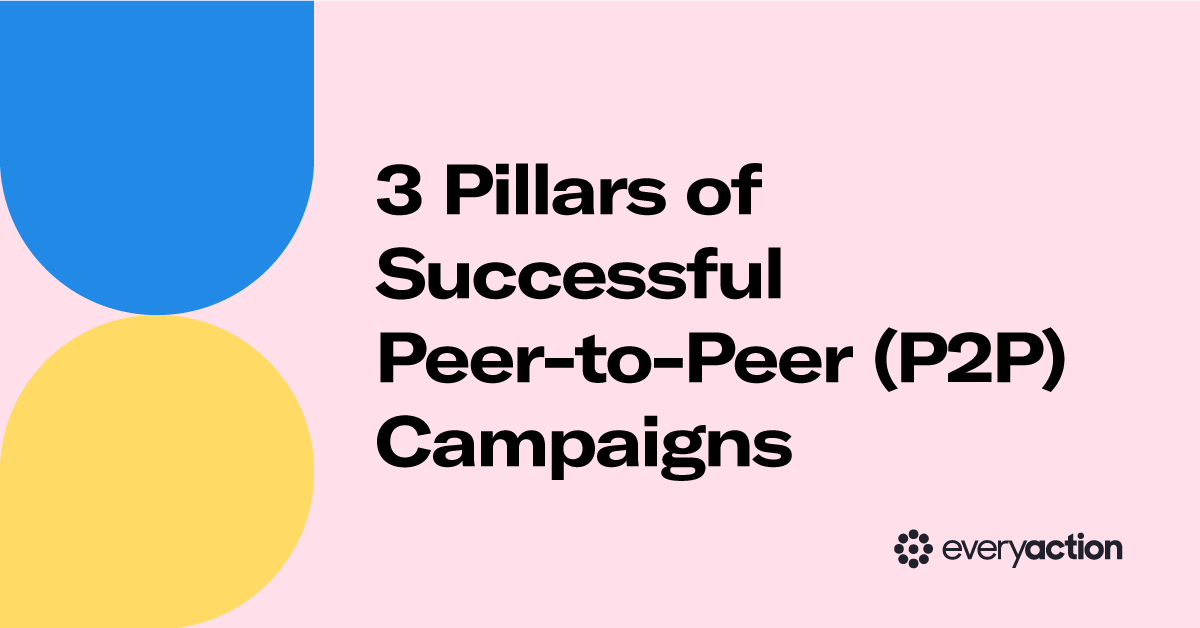 EveryAction recently got together with our friends at Corporate Giving Connection for an expert interview about all things peer-to-peer fundraising, or P2P. Why? Because one of the #1 lessons our community has learned (or rediscovered) over the past 18 months is the importance of diversifying revenue streams—and P2P is a great strategy for reaching that goal. We asked Chris Hammond, CEO of Corporate Giving Connection, for his expert opinion on the hallmarks of a great P2P campaign—here’s what he said.

Q: What are the pillars of a successful nonprofit peer-to-peer (P2P) fundraising campaign?

A: The very first things we think about as pillars for a successful P2P campaign are your campaign hook, your recruitment plan, and clear processes for your fundraisers.

First, what’s the hook? I think that’s one of the most important pieces of a P2P campaign that a lot of people may not really think about.

When you’re figuring out your nonprofit’s campaign angle, ask yourself: is there a campaign theme? What programs is your campaign going to benefit? Is it based around an event or an anniversary? There needs to be some overarching campaign theme—we think that’s imperative, because if you have a strong campaign theme, you can build your content and your messaging to ensure that it all works together like a unified thesis statement. From there, once you have that thesis statement, you can create your supporting messaging and supporting content that can guide you through the duration of your campaign.

A second pillar we think about all the time: is there an actual recruitment plan in place for fundraisers? Often, we hear organizations get excited and say, “We’re going to do a peer-to-peer campaign!”—and we can’t blame them, it’s a hot strategy right now.

However, when we ask that organization, “Do you have a recruitment plan?” they’ll sometimes reply, “No! We’re going to ask a few of our Board members to do it and see what happens.” We don’t see a plan like that leading to success, which is why we think recruitment is something that’s integral to a successful P2P strategy—if you combine a strong campaign hook with a well-planned fundraiser recruitment strategy, this empowers you to build the campaign infrastructure you need to execute your campaign in a seamless fashion.

Clear Processes for Your P2P Fundraisers

Third, as you progress through the different levels of peer-to-peer campaign planning, you’ll need to communicate to your fundraisers that you’ve got clear processes for them to follow and that they won’t need to go it alone. So let’s say you started off by creating a strong campaign theme and crafting your messaging. Next, you want to start the process of recruiting. As you’re doing recruitment, it’s important to make it clear to your fundraisers that you’re providing them with the tools they need to be successful—let them know you’ll keep in touch with them, and that you’re providing them with the templates they need to actually do the work of fundraising for your organization. That way, it becomes a much easier value proposition, because your supporters know they will get the help they need to fundraise on your behalf.

Want to learn even more about successful peer-to-peer fundraising? View the full 45-minute expert interview on demand now, and talk to us to learn about how your platform can support you as you expand your fundraising into new channels like P2P.