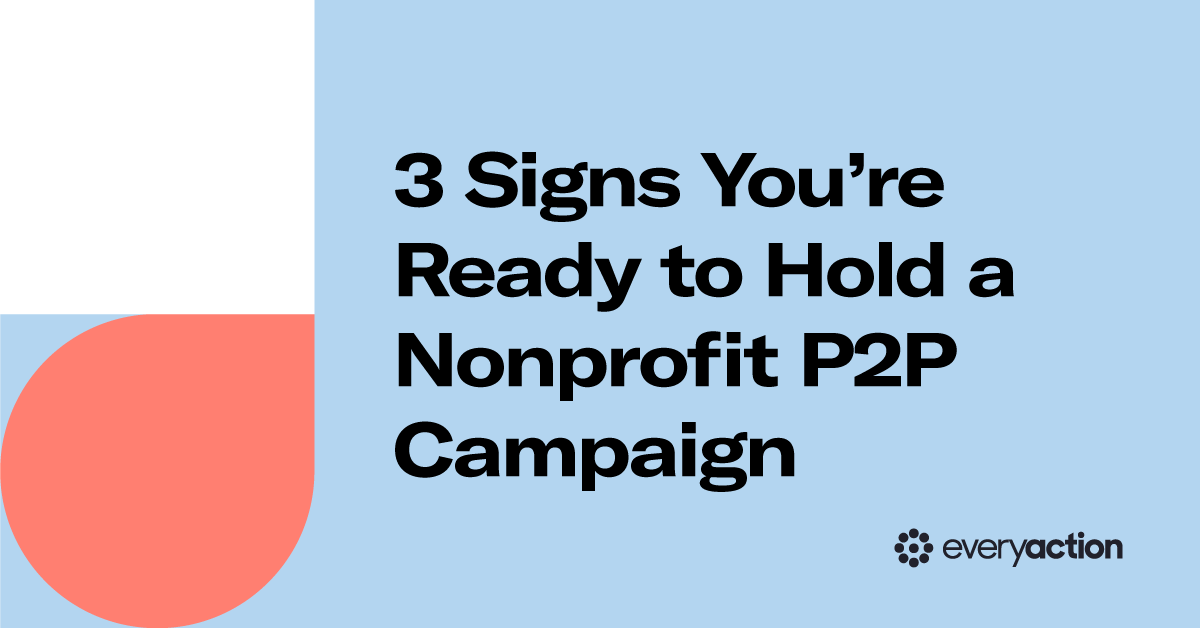 Peer-to-peer (often abbreviated as P2P) campaigns are a great way for nonprofits to raise more funds for their missions, without needing to hire more staff or exponentially grow their workloads. We asked our friend Chris Hammond, CEO of Corporate Giving Connection, about which factors nonprofits should look for to know when they’re ready to hold a P2P campaign, and how to prepare if they’ve never held a P2P campaign before. Here’s what he said.

Q: How do I know my nonprofit is ready to run a P2P fundraising campaign?

A: From my perspective, there are three important factors: experience, people, and plans.

1. Experience. You’ve run a similar campaign before—or at a minimum, you’re in regular contact with your audiences.

I think one of the first questions you should answer to know if you’re ready to run a peer-to-peer campaign is, has your organization done something like this before? For example, maybe you’ve never held a P2P campaign before, but you have experience running an event or a crowdfunding campaign. Those can require similar levels of internal planning and external communication across channels, so those are some skills that can transfer.

On the other hand, is this the very first time you’re running a campaign like this? If that’s the case, what kind of communication baseline do you have right now with your audiences—are you engaging your supporters regularly? Which channels are you using? What does the response typically look like from your audiences?

The reason this matters is sometimes organizations will decide to do a full-fledged P2P campaign, complete with multiple touchpoints in different communications channels—but then realize they’ve never sent regular email to their constituents before. This kind of sudden ramp-up can be confusing for supporters, and they may not respond the way you’d like them to, so it’s important to establish contact with your audiences and engage them regularly. That way, they aren’t surprised when you or one of your P2P fundraisers asks them for a donation.

2. People. You know who your P2P fundraisers are—and they aren’t limited to Board members.

A second important question to answer when you’re identifying your readiness level for running a P2P campaign: what do your fundraisers look like? Can you think of people that can serve as fundraisers? Can you expand your list of candidates beyond your Board members?

I think a lot of times, nonprofits develop the idea of running a peer-to-peer campaign and assume Board members will execute it—but that isn’t always feasible; we’ve all had our hearts broken before! Board members aren’t always going to be ideal fundraisers, but that’s okay: you may have other strong fundraiser candidates already waiting in the wings.

A fundraiser doesn’t necessarily have to have deep pockets, or a huge personal network. It just needs to be someone who’s willing to put in the work (and that work doesn’t have to be a tall ask—more on that in a minute.) I often say, you could find a great fundraiser in a volunteer, an individual donor, or an event attendee—someone who’s engaged with you before, and who’s shown you they feel connected to your mission. Don’t be afraid to cast a wide net when you’re identifying potential fundraisers, since the more candidates you have, the more folks you can ask to share your campaign with their networks, and the more you can raise for your mission.

3. Plans. You know how to ask people to serve as your P2P fundraisers—and you’re ready to support them every step of the way.

A third question you should ask yourselves to know if you’re ready to run a P2P campaign is, do we know what to include when we’re asking folks to serve as peer-to-peer fundraisers? If you have a group of people you’ve identified to serve as your fundraisers, it’s important to make a clear and specific ask of them, including what kinds of guidance and support you will offer them.

For example, you might reach out and say, “Our organization has a P2P fundraising campaign coming up, and we’d love for you to participate as a fundraiser. We’ll provide you with a resource kit, including templates and prewritten copy you can use. All you have to do is copy-paste, personalize, and press ‘send’ to your network on these days. Are you in?” Setting clear expectations, letting your fundraisers know you’ve already done the planning work, and asking them to do specific tasks helps them say ‘yes’ to participating in your campaign. You might also find that when you ask a supporter to be a P2P fundraiser, instead of asking them for a donation, it changes how that supporter engages with you and they may be more likely to say yes. And I think that makes a big difference.

Trying a new fundraising tactic—like running a personalized, multi-channel peer-to-peer fundraising campaign—shouldn’t require more work. Talk to us to learn how the right platform can help you (and your P2P fundraisers!) ensure you’re engaging the right supporters, with the right messages, at the right time, so you can raise more for your mission.