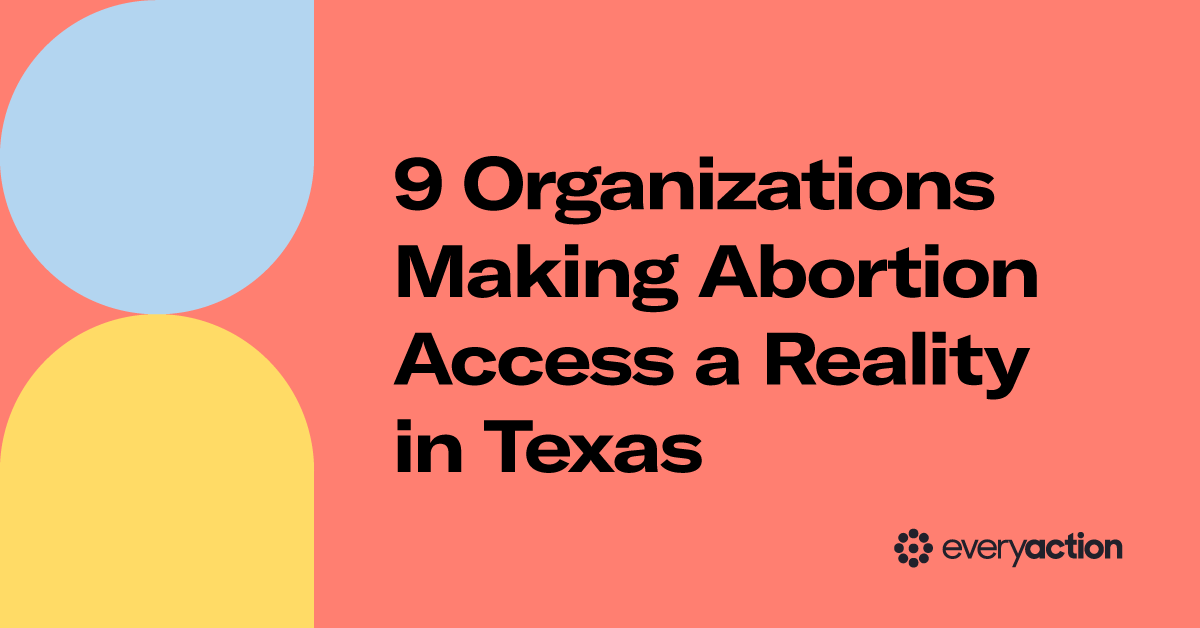 Every person has the constitutional right to an abortion in all fifty states. However, the state of Texas this week enacted a ban on all abortion care after six weeks, and in doing so, succeeded in making abortion extremely difficult to access for millions.

The six-week ban is not a new tactic for anti-abortion extremists, but Texas’ ban goes a step further than prior bans in other states: as NPR puts it, “this law allows individuals to bring civil lawsuits against abortion providers or anyone else found to ‘aid or abet’ illegal abortions.” The Supreme Court failed to strike down this ban, ruling 5-4 to uphold it.

Texas’ ban is a dangerous, extremist precedent. Abortion bans have disproportionate and cruel effects on already-marginalized communities. Anti-abortion groups have also indicated a desire to test this variety of the six-week ban tactic in other states.

To sum it up, the fight isn’t over, and Texans deserve support and solidarity. Yesterday alone, EveryAction processed about 20,000 individual donations on our platform specifically in support of abortion rights issues. We’re proud to partner with organizations like the ones below working to make abortion access a reality in the state of Texas.

Texas Equal Access Fund provides funding to low-income people in the northern region of Texas who are seeking abortion and cannot afford it, while simultaneously working to end barriers to abortion access through community education and shifting the current culture toward reproductive justice.

We provide financial assistance and emotional support while building community spaces for people who need abortions in Texas—unapologetically, with compassion and conviction. Through organizing and movement-building, we foster a positive culture around abortion, strengthen people power, and fight for reproductive justice in and with our communities.

To make abortion accessible in the Rio Grande Valley by providing financial and practical support regardless of immigration status, gender identity, ability, sexual orientation, race, class, age, or religious affiliation and to build grassroots organizing power at intersecting issues across our region to shift the culture of shame and stigma.

Please note that Frontera Fund will not be taking helpline texts or calls from September 1-16.

We believe that everyone deserves access to reproductive healthcare, regardless of income, socioeconomic status, living situation, race, gender identity, or sexual orientation.

We understand that one’s legal right to have an abortion is meaningless without real access, and that a lack of transportation often presents a barrier to accessing the abortion one needs.

We defend the rights of immigrants and refugees, empower individuals, families, and communities, and advocate for liberty and justice.

We Testify is an organization dedicated to the leadership and representation of people who have abortions, increasing the spectrum of abortion storytellers in the public sphere, and shifting the way the media understands the context and complexity of accessing abortion care. We Testify invests in abortion storytellers to elevate their voices and expertise, particularly those of color, those from rural and conservative communities, those who are queer-identified, those with varying abilities and citizenship statuses, and those who needed support when navigating barriers while accessing abortion care.

At Planned Parenthood our mission is to ensure all people have access to the care and resources they need to make informed decisions about their bodies, their lives, and their futures. Founded in 1916, Planned Parenthood is a trusted health care provider, educator, and passionate advocate here in the U.S. as well as a strong partner to health and rights organizations around the world. Each year, Planned Parenthood delivers vital sexual and reproductive health care, sex education, and information to millions of people.

The 2.5 million members of NARAL Pro-Choice America fight for reproductive freedom for every body. Each day, we organize and mobilize to protect that freedom by fighting for access to abortion care, birth control, paid parental leave, and protections from pregnancy discrimination.

Like 77% of Americans, we believe in the legal right to abortion. We are the foot soldiers who work to ensure that abortion access is not only protected, but expanded. Since 1969, our member-driven campaigns have propelled political and cultural change at every level, from the statehouse to the White House.