Client Story: How VPIRG Pivoted Their Organizing Strategy with EveryAction 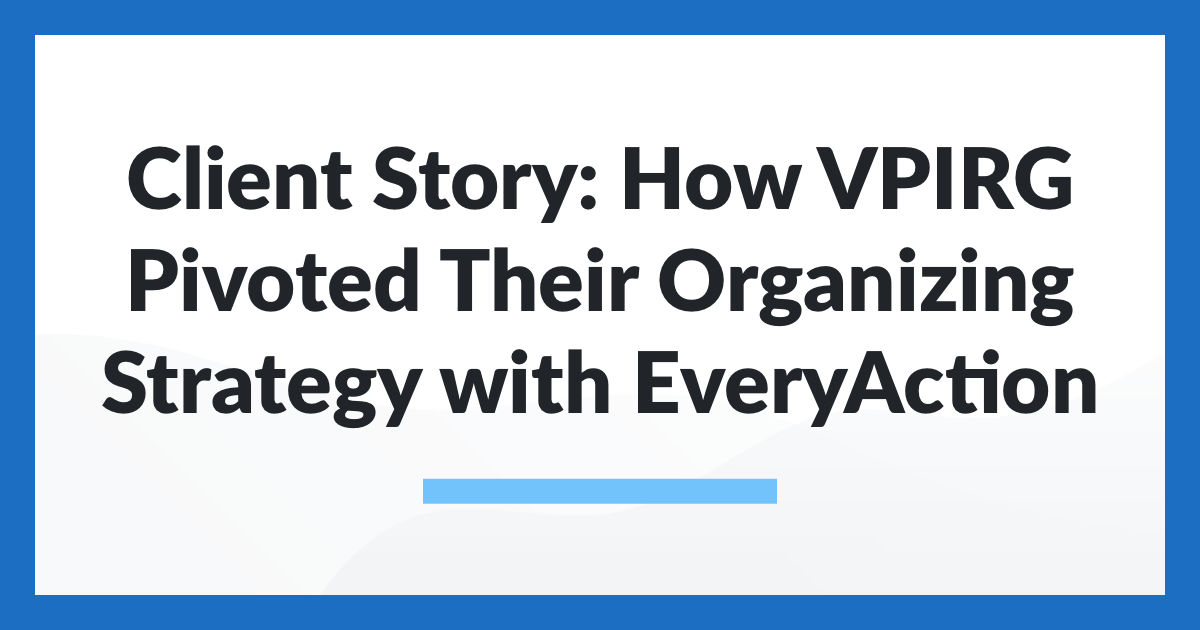 Phew, 2020 is over. While there are many things we simply want to put behind us, many non-profits successfully pivoted and achieved amazing results despite the challenges. The strategies that allowed them to obtain success are things that they plan to keep, as they amplify their ability to advance their missions.

VPIRG had a solid plan at the beginning of 2020—continuing to build a statewide organizing and advocacy program, particularly through their annual summer canvass. Membership acquisition, renewal, and fundraising are the major goals of the canvass, with a baseline target of breaking even on the costs of running the operation, while creating a net gain of new and renewed members. Qualitatively, the canvass serves to educate members and build energy around a specific advocacy campaign, as well as serving as a leadership pipeline for progressive young people in the organization.

When it became clear in early March that the COVID-19 pandemic would make a door-to-door canvass impossible, Communications and Engagement Director Zach Tomanelli and the entire VPIRG team had to quickly pivot to building a digital alternative to canvassing.

To replace the door-to-door summer canvass, VPIRG built a layered digital campaign to contact and renew their members, including emailing members to let them know a “digital canvass” was coming to their town, phone banking, text banking, running targeted social media ads, and integrating personal videos to re-create the face-to-face aspect of a canvass.

Crucially, contact data from each channel was stored in one place: EveryAction. This allowed VPIRG to create channels of communication that built on each other and provided a personalized experience for each member. Looking at where each member most often interacted allowed VPIRG to determine that member’s preferred channels and scale back communications in other mediums.

With data from each channel stored in one CRM, channels were able to adapt instantly—a donor who gave in response to an email or text message would be automatically taken out of the evening’s phone bank list – ensuring that the whole operation worked together as one fundraising machine.

Using a unified database also allowed VPIRG to effectively manage complex data issues, such as householding contact record or identifying and merging duplicates, and build personal relationships by assigning the same canvasser to do follow-up with the members they had previously spoken with.

Training and onboarding new staff was fast and simple; according to Tomanelli, “In our previous system, we had to create a log-in for them in four different platforms, with EveryAction, in minutes they could be logged in, trained, and have access to all of the information they needed.”

Although it involved hiring fewer staff and talking to fewer people than a traditional canvass, VPIRG concluded that their digital outreach efforts were an “absolute success”—achieving a comparable ROI ratio to the traditional canvass, exceeding expectations in terms of budget health, and making up a huge chunk of member retention. “It’s not that we’d never done Digital outreach before,” says Tomanelli, “but we certainly hadn’t done it as this scale, and EveryAction allowed us to do that. On our previous system it would have been harder.”

When door-to-door canvassing is possible again, VPIRG plans to continue using the digital infrastructure that they’ve built for member contact to supplement their in-person outreach, making it a more holistic and effective experience.

So while 2020 is now in the past, and we hope to move on, there are certainly things we simply should not forget. Having a fundraising plan that is multi-channel, and solutions that allow you to quickly pivot and adapt is critical.