Client Story: How The Wilderness Society Uses Testing to Grow Online Revenue at Year-End and Year-Round 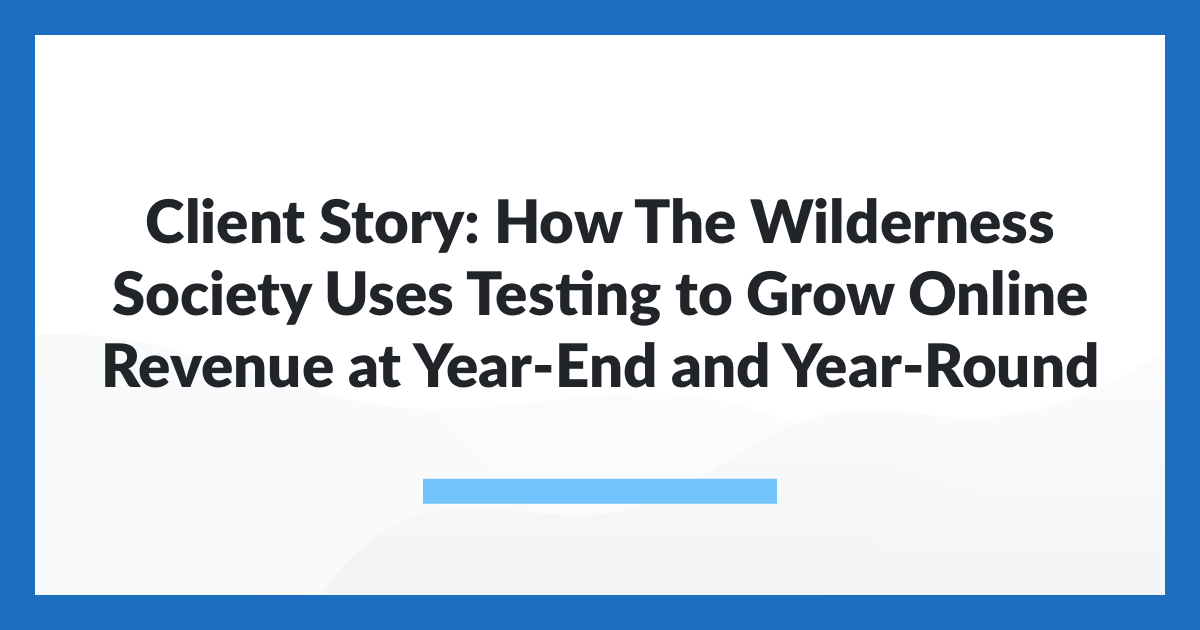 The Wilderness Society has been working since 1935 to conduct research, compose well-informed policy, educate government figures and the public, and promote the earth’s welfare, including taking up the mantle to fight climate change. Their mission is to protect wilderness and inspire Americans to care for our wild places.

Headquartered in Washington, DC and with regional offices in Alaska, Arizona, Colorado, California, Idaho, Maine, Montana, New Mexico, North Carolina, Washington and Wyoming, The Wilderness Society chose EveryAction to meet their need for clean, accurate data in a unified system, to ensure that every stakeholder had access to up-to-date information in real time.

Interactive Strategies is a 360-degree agency based in Washington, DC. Offering web design, development, strategy, marketing, content, and analytics in addition to their fundraising and email work, they act as a strategic partner for a long list of nonprofits, associations, and B2B2C companies—including EveryAction clients The Wilderness Society, American Association of University Women, and Environmental Working Group.

Having switched to EveryAction as their primary digital fundraising platform in fall 2019, The Wilderness Society worked with their digital agency, Interactive Strategies, to test several email fundraising strategies and identify the ones that would raise the most money during the busiest time of year.

Interactive Strategies wanted to use the busy end-of-year period to focus their testing strategy on whether using Highest Previous Contribution (HPC) data to inform ask amounts in appeals to existing donors would increase year-end giving. They particularly wanted to test whether an HPC-informed ask amount would outperform the use of a $100 default gift amount.

The Wilderness Society and Interactive Strategies proceeded with this HPC testing during year-end 2019. They used HPC data which was stored in their EveryAction CRM to set the ask amounts for 400,000 email recipients and determined that it increased year-end revenue over the use of a $100 default gift amount.

“This was the first year-end season that The Wilderness Society was using EveryAction, so we were particularly excited to test the use of Highest Previous Contribution (HPC) data,” explained Hannah Leigh, Associate Director of Client Services, Interactive Strategies. “We were thrilled that our testing was successful as it showed that the use of HPC data did increase revenue for TWS’s active donor audience.”

In addition to year-end testing projects, Interactive Strategies is working with The Wilderness Society to perform several other fundamental tests in 2020.

“We want to test if we should set the default to monthly giving instead of one-time giving on all of their donation pages,” Leigh said. “That will typically decrease short term revenue, but increase revenue in the long-term and increase the lifetime value of donors who convert.

“We also want to test the ideal number of ask amount buttons on the donation pages. We’re going to test 5 versus 6 ask amount buttons, and then 6 versus 7 buttons. These may seem like trivial changes, but they have an impact on revenue over time, especially for larger programs.

“Finally, we’re going to continue to test the addition of higher value ask amounts ($1,000+) on all TWS’s donation pages. This probably won’t impact their smaller value donors, but we’re hoping to better understand how it moves their mid-level donors to increase their giving over time.”