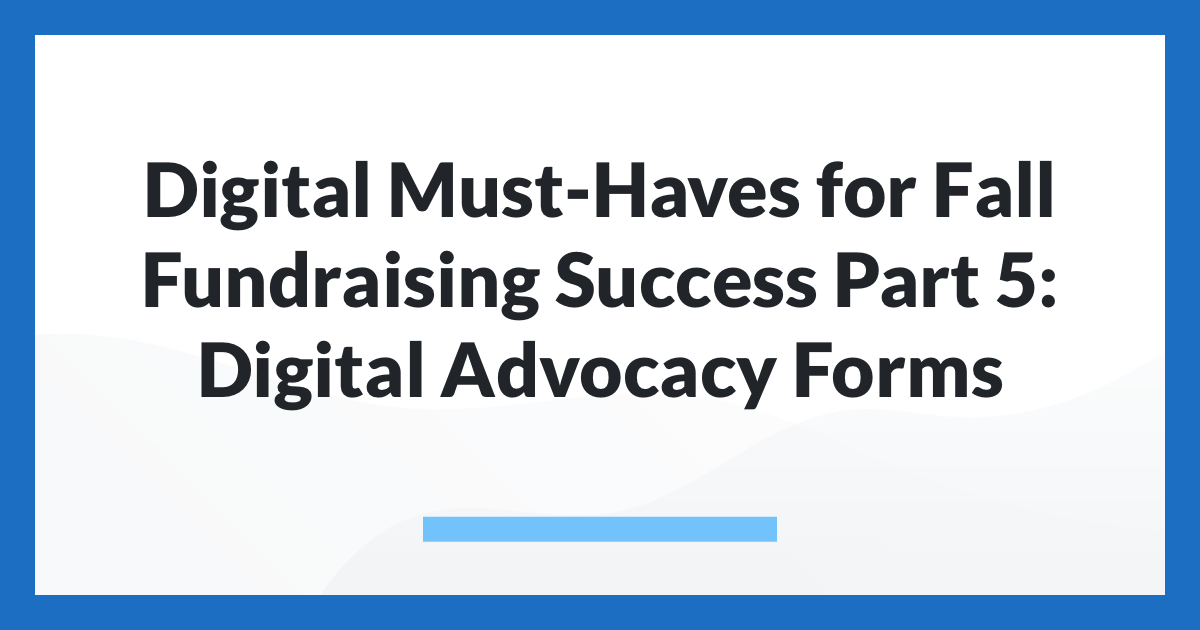 GivingTuesday and Year-End are right around the corner, and your nonprofit is probably already feeling the pressure to have a fool-proof fundraising plan. Don’t worry — if you’re not there yet, you’re not alone. In our newest 6-part blog series, we’re highlighting a key digital feature your organization can start implementing now to boost fundraising this fall. Last week, we went over sustainer upsell lightboxes. This week’s topic: digital advocacy forms.

(Click here to see our overview of the six digital must-haves for your nonprofit’s fall fundraising success.)

Why should your nonprofit use digital advocacy forms now?

There’s a lot going on in the world. With the upheaval the pandemic has brought, it might not seem like an appropriate time to reach out to supporters for them to take action. However, while it might seem counterintuitive at first, this year has sent a renewed wave of widespread political energy throughout the nation. No matter how your nonprofit is doing good in our world, there’s a chance they’re affected by local and national legislation.

Now, more than ever before, it’s important for nonprofits to elevate their supporters’ voices. If your organization has been thinking about running an advocacy campaign, this is the time to do it. Supporters are willing and eager to do what they can to make an impact, and digital advocacy empowers supporters by allowing them to easily participate from the convenience and safety of their home.

The short answer? They work.

Digital advocacy form usage on EveryAction has increased over the course of this year. EveryAction has recently been seeing almost 1 million actions taken per month. Our average deliverability rate across API, forms, email, and fax totals to 98.58%.

Supporters are more engaged than ever, and when it comes to deliverability, our advocacy features are optimized for effectiveness.

How does it fit into the overall strategy?

There’s a part of each of your supporters that longs to become part of something bigger than themselves. It’s why they’ve invested their time, energy, and resources into working with your organization to achieve its mission. Think of using digital advocacy forms as a gateway or invitation for supporters to go from being a passive supporter to an active supporter.

Integrating opportunities to advocate for your cause into your digital fundraising campaigns will help connect donors to your work. It’ll also remind them of the value of your mission. Examples might include supporters using one-click actions, signing a petition (which only takes a second), and instantly directing them to a thank you page, which prompts them to take another step by filling out a donation form as well.

EveryAction’s Advocacy Online Actions forms were built to increase conversion rates to help nonprofits mobilize supporters and engage with elected officials. If you’re ready to take your advocacy campaign to the next level, get a demo today.

Read our 6th and final installment here, and then download our Guide to a Successful #GivingTuesday and Year-End 2020: Strategies and Tools for Fall Fundraising in Uncertain Times for more tips, techniques, and tools to make this year a success.