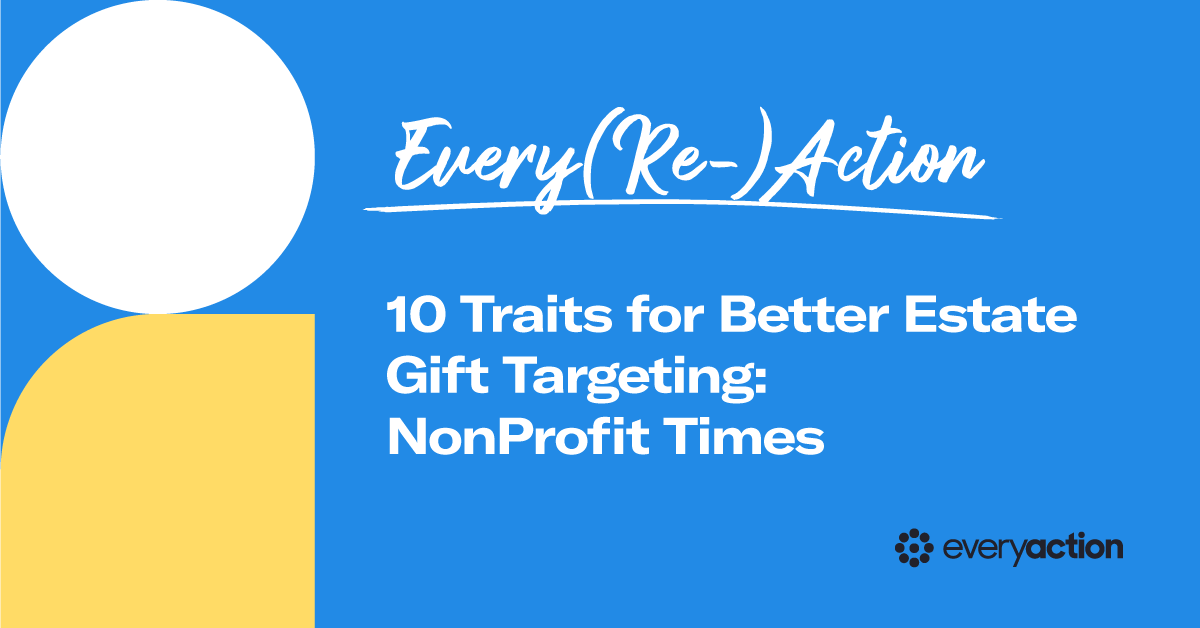 The NonProfit Times has reported that new research from the Health and Retirement Study (HRS) “has identified a top 10 list of lifetime characteristics that are most important in predicting charitable transfers.” Fundraisers can and should use this information to help them connect with the right donors, with the right information, at the right time—and given that charities are expecting a $9 trillion wealth transfer between 2018 and 2042, the right time has arrived for nonprofits to set ambitious estate gift fundraising goals.

About the HRS and Estate Giving

The study’s background explains the methodology:

“The Emerging Potential of Longitudinal Empirical Research in Estate Planning: Examples from Charitable Bequests” is based on the Health and Retirement Study (HRS), which includes nationally representative data that has come out biannually since 1992. The HRS tracked more than 14,000 people since age 50 to connect lifetime giving and other characteristics and planning and seeing where estates actually have been transferred.

This study, according to its introduction, has deep academic roots:

The HRS is a longitudinal study of health and financial circumstances of adults aged fifty and older conducted every two years. It has included more than 43,000 participants and is “the largest academic behavioral and social science project ever undertaken in the United States.” The HRS first began in 1992, initially funded by congressional action in 1990 with subsequent federal grants far exceeding $100 million, and is now “the most comprehensive population-representative study” of older adults in the nation.

The HRS and Estate Giving

The HRS listed ten qualities that indicate a donor has a strong likelihood of making an estate gift. Here are some of our favorite proven techniques to take action on these findings:

Consistency in donating is measured as “the share of all survey years in which the respondent indicated donating at least $500 to charity.” We know that donor retention is an ongoing challenge for many nonprofits, which means that building successful and consistent long-term relationships through stewardship is even more important.

While many donors with children are very generous, the report found that those without children may be likelier to make an estate gift. It’s possible that these donors find themselves with more time, space, and resources over the course of their lives to build the kinds of close, long-term relationships with nonprofits that can lead to estate gifts — put another way, if donors are not bequeathing wealth to their children, they will likely have more funds available to make planned gifts.

The highest amount ever donated in any one year during life; wealth in the final survey; having a growing trajectory of wealth leading up to death; donation amount in the year of the final survey.

Many nonprofits have experience segmenting donors by recency and frequency to make manual predictions about who is ready to make which kind of gift. These four traits have two things in common: the HRS linked them to estate giving, and they’re where predictive analytics can support nonprofits’ fundraising strategy. If you’d like to target donors for a specific purpose, like estate giving, you need data that’s up-to-date in real time — and those daily predictions and scores are even more realistic and actionable if you can see each action all your supporters have taken to help you advance your mission.

Being female; not being married.

The Women’s Philanthropy Institute (WPI) at IUPUI’s Lilly Family School of Philanthropy studies women’s unique approach to generosity. Although women and men do sometimes show similar giving behaviors, women play an important role in charitable giving — for example, WPI’s March 2021 report found that in coupled households, over 60 percent of couples make giving decisions together, but where couples don’t decide jointly, women are slightly more likely to be the sole decision-maker for charitable giving. Additionally, WPI noted that although married couples tend to give a higher percentage of their joint income, several years of data have shown that “single women and single men have different patterns of giving: single women are more likely to give, and give more, compared to single men.” It makes sense that patterns like these would be visible in estate giving.

This report confirms something nonprofits have noticed for many years: volunteering creates community – and volunteers who feel that higher level of connection to your mission are likelier to make a donation. Specifically, our volunteer network has found that volunteers are twice as likely to make a gift than non-volunteers. Don’t leave money on the table! Stewarding volunteers not only helps you form close short-term relationships, but could also help you build the long-term relationships you need to approach estate giving.

Not only did the HRS find that women donors and consistent volunteers are likelier to make estate gifts, but other research can help nonprofits segment and target those demographics in a more focused way. For example, WPI’s report on women and crowdfunding shows that when the data is disaggregated, different demographics of women are likelier than others to act charitably by volunteering. This is a clear example of why it’s so important to be able to see all of your supporter data at a glance, in order to efficiently target your messaging.

This is clearly the moment to focus on planned giving — and to do that well, you need to really know how to speak to your different donor segments. Different generations understand charity impact in different ways: some, like Millennials, take a uniquely holistic perspective on philanthropy; and a wealthy, progressive subset of Millennials are increasingly invested in redistributing their family fortunes to leave a new kind of lasting legacy. Reports like the HRS can help nonprofits raise more funds, more efficiently by sending the right targeted estate giving messages, to the right donors, at the right time.

As donor attitudes change and the moment becomes right for estate gift planning, make sure your platform can support your organization’s goals and your audience’s messaging needs — download our guide to the Future of Fundraising, and talk to us to learn more.