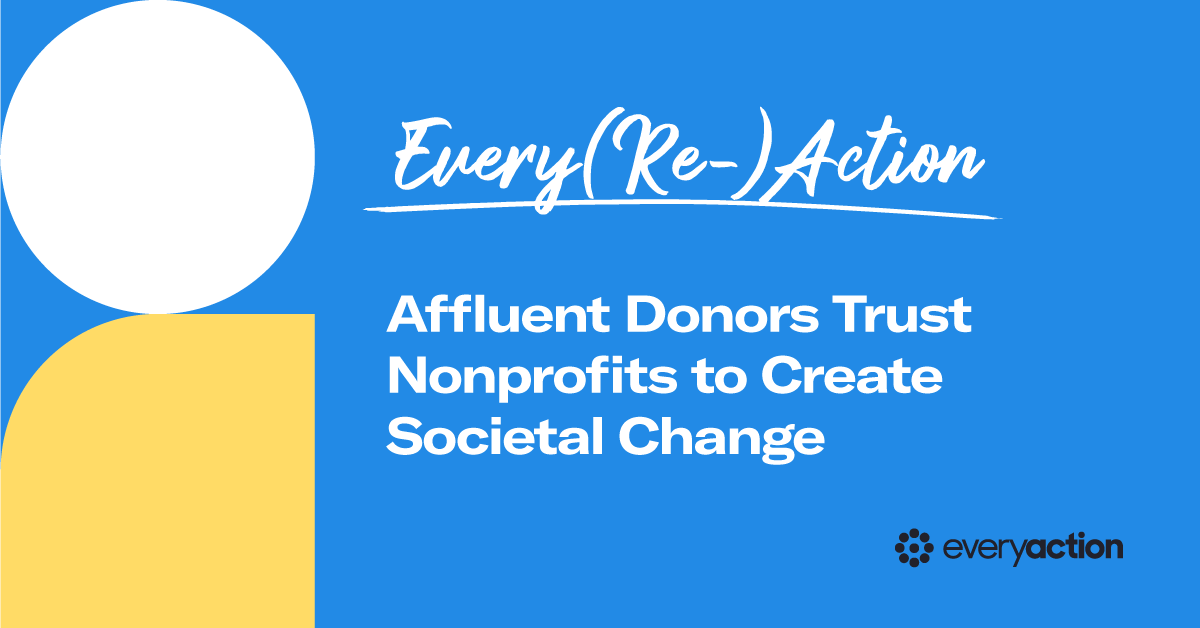 Affluent donors issued a vote of confidence in nonprofits as agents of societal change — this is a key finding from the latest report by Bank of America and IUPUI. Part two of our perspective on this 123-page report covered giving to support COVID-19 pandemic relief efforts; information on giving to charitable sub-sectors and affinity groups; and affluent donors’ charitable giving knowledge and decision-making strategies. Top-line findings for part three include:

As we noted in part one and part two, this report covers many areas, and is “based on a survey of 1,626 households with a net worth of $1 million or more[…] The median income of survey participants was $350,000, and the median wealth level was $2 million.”

Sections 7 and 8 of this report discussed whether and how affluent individuals involve their families in their charitable giving; and affluent individuals’ beliefs about creating impact in society, respectively. Section 9 covered tax considerations; making contributions to political candidates, campaigns, or committees; top policy concerns for high net worth individuals; and confidence in societal institutions. Lastly, section 10 reported on differences in charitable behaviors across four subgroups: age, gender, sexual identity, and ethnic identity. For a third and last time, let’s dive in!

Section 7: Affluent Donors, their Families, and their Decisions

Most affluent donors make their donation decisions alone — nearly 80 percent of respondents said they did not include relatives of other generations in their decision-making, and just under 16 percent involve younger generations (children, grandchildren) in their giving decisions.

For a nonprofit, this can introduce more complexity into communicating the value and impact of your work: not only are you attempting to communicate your impact to your primary audience (the donor,) but you may find that your messages are more efficient when you address secondary audiences, like donors’ children or grandchildren — and we know that different generations interpret charity impact in different ways. This is why it’s so important to test your messaging, and let your CRM’s data guide you: what are donors responding to? What aren’t they responding to? As you’re testing more and more variations of your donor messaging, functionalities like automation can help you send more unique messages, to more audiences, without expending more precious staff time.

Outside of their spouses and partners, this report found that affluent donors wanted to leave 77 percent of their wealth to children and grandchildren — and this was the case regardless of whether respondents actually had children of their own. These donors want to leave an additional 10.2 percent of their wealth to other, non-children or non-grandchildren heirs. The remaining 12.7 percent, donors say, they will donate: 8.6 percent to secular ones, 4.1 percent to religious charities.

We’ve written before about why now is the time to focus on planned giving — with Baby Boomers and the Greatest Generation aging out of their prime giving years, and with $9 trillion expected to be donated to nonprofits between 2018 and 2042, many donors are ready and eager to discuss their legacies with nonprofits whose missions are close to their hearts.

This is again an opportunity for your nonprofit to effectively and proactively communicate your work’s impact, and take into account factors like donor age and metrics of interest. Using tools like donor surveys, you can learn about your supporters’ interests and priorities. Their responses can help you focus your messaging for different audiences and segments, and you can then more effectively educate donors with support from functionalities like data visualization and automated reporting. This can help you assure valued donors that their gifts are making a difference.

When asked about their priorities surrounding taxes, political donations, and policy issues, most respondents (just over 50 percent) said they intended to itemize their gifts as tax deductions. Most donors (over 70 percent) predicted their giving patterns would not change even if income tax deductions or estate tax were to be permanently eliminated. Lastly, 68 percent of affluent households didn’t give financially to political candidates, campaigns, or committees in 2020 — and this was reflective of another report finding: when asked about confidence in societal institutions, affluent donors’ preferences were clear: over 86 percent said nonprofits had their vote of confidence as problem-solvers, more so than government or corporate entities.

These findings present multiple opportunities: nonprofits don’t appear to be competing with elected officials or electoral political entities for affluent donor dollars. Additionally, attention to detail in receipting can help donors feel confident giving to your nonprofit: for example, you wouldn’t send tax receipts for gifts from donor-advised funds; and with support from the right platform, you can use automation to send the right receipt, to the right donor, in their preferred channel, as soon as possible.

When asked to choose the 3 causes at the top of their priority lists, donors chose education (28.7 percent,) health care (26.5 percent,) and climate change (20.5 percent.) Nonprofits should care about these findings in the context of donor acquisition and retention, because just under 52 percent of donors said the gifts they made were “very linked” to their public policy concerns, and another 21.6 percent said their gifts were “somewhat linked” and wanted them to be more closely linked. This is a clear opportunity for nonprofits to build closer bonds with supporters, both new and existing, over a shared love of the mission.

This report’s wide array of responses demonstrates why it can be so valuable to segment and target your donors using not only behavior data, but also demographic data — however, you should continually test your messaging to be sure you are working off the most current information you have, rather than relying on older assumptions about what works for different donor demographics.

Different responses by demographics groups about technology preferences in donating — i.e., giving through a nonprofit’s website, through a payment processing app like Zelle or Venmo, online donor-advised fund recommendations, and text-to-give — also illustrates how different audiences may prefer different giving experiences, and why it’s so important that nonprofits can create a smooth and comfortable donating experience for each and every donor. The risk of leaving money on the table is simply too great.

This aligns with other findings about younger donors’ giving patterns, particularly Millennials: as NonProfit Times reported earlier this year, “With Millennials, their values are more important than a specific nonprofit brand[…] a nonprofit that fails to live up to their values, or that is seen as out of line either due to organizational or individual missteps, runs the risk of losing Millennial support more quickly than among older cohorts.” As a nonprofit, you can harness this enthusiasm for the mission across your programs to build deeper relationships with supporters and boost retention.

Nonprofits who want to attract, steward, and retain affluent donors can utilize this report’s findings to craft and test effective messaging, communicate the importance of their donors’ gifts, and ultimately raise more for the mission — but to put those strategies into action, fundraisers need support from the right platform. A highly-integrated or unified platform like EveryAction, where nonprofits can see and track every step a donor takes in support of your mission, can help you fund your essential work more efficiently. Talk to us to learn more.