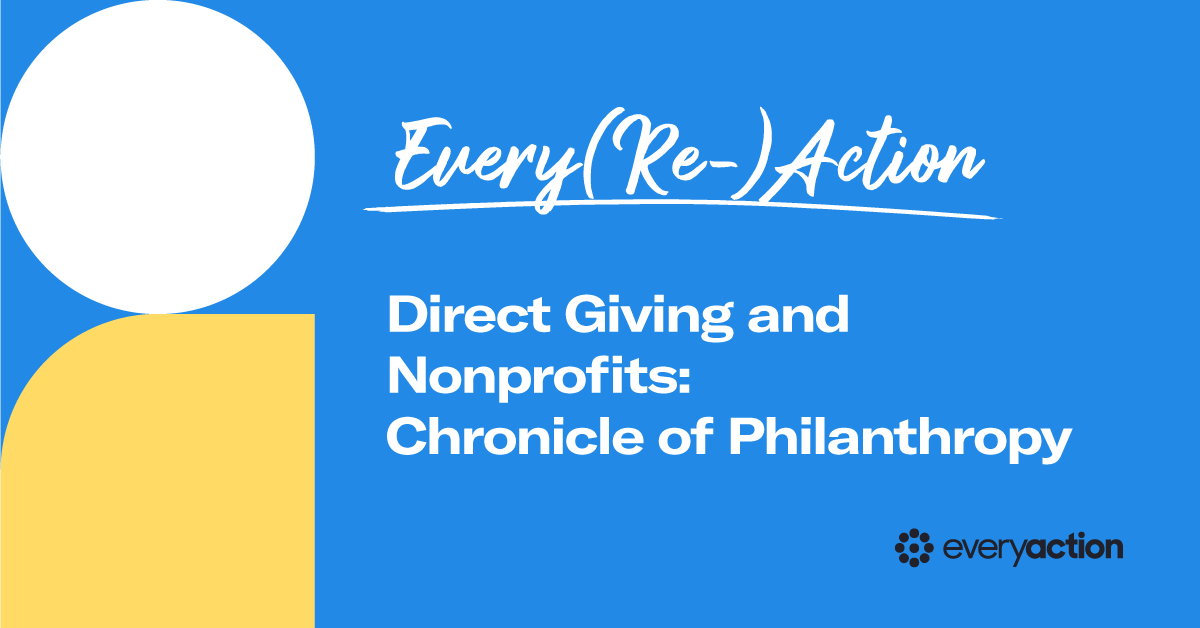 Direct giving has a long history, says the Chronicle:

People have always given directly to other people, whether to a friend, family member, neighbor, or stranger in need. It’s the oldest form of generosity. But crowdfunding platforms, payment applications, and other technologies have made direct giving more accessible — and perhaps more visible — to more people.

In response to discrimination and problems accessing the social safety net, Black, indigenous, immigrant, and other marginalized people have long pooled resources to support one another. The pandemic and an increased sense of collectivism raised the profile of this kind of grassroots organizing. Experts say these ways of giving and coming together are all part of an expanding landscape of how we show generosity.

And direct giving isn’t going away. Whether its popularity is a sign that nonprofits aren’t winning the trust or hearts of some portion of the giving public remains an open question. But it’s critical that nonprofits pay attention and take all kinds of giving seriously — including that which doesn’t pass through formal charitable structures.

Some leaders, like director of Stanford University’s Digital Civil Society Lab Lucy Bernholz, argue that it’s important to acknowledge the amount of giving taking place outside of traditional nonprofit structures. Bernholz isn’t alone: Fidelity Charitable found in a recent report that Millennials are likelier than older generations to give directly instead of to registered nonprofits.

GivingTuesday’s October 2020 survey backs up these results. As the Chronicle reports, the survey found that out of 5,153 American adults:

While Fidelity Charitable requires their donor-advised funds to direct grants to registered 501(c)3 organizations, they admit that direct giving is “one of the most tangible ways to provide help and support to someone in need.”

There’s an academic term for the phenomenon of recognizing a need and sending resources to meet that need on a person-to-person basis: “the identifiable victim effect.” As the Chronicle notes, this term “describes the likelihood that people will feel greater empathy — and an urge to help — if they have information about a specific, identifiable individual versus if they are asked to help a broader group of people or an organization.”

How Much Direct Giving is Taking Place?

The catch, as Fidelity and the Chronicle both point out, is that under current standards of regulation it can be difficult to measure how much direct giving is taking place. The Agitator recently noted that the American donor is vanishing, but perhaps this is more of an evolution than a disappearance: the Chronicle points out that “researchers have charted a steady decline in the share of Americans who donate to charity[, but] at the same time total giving continues to increase.”

There’s currently not enough data to indicate whether donors are choosing to shift their generosity toward direct giving opportunities and away from registered nonprofits. Some leaders, like associate dean for research and international programs at IUPUI’s Lilly School of Philanthropy Una Osili, believe that “people are doing both, and for different reasons[…] They’re supporting nonprofits, and they’re also giving to those in need, sometimes not through a charitable organization.”

It’s clear that people are really connecting with the authentic, community-rooted nature of direct giving and mutual aid. These forms of generosity have deep roots in many cultures, and they have clear importance now, when so many disasters and catastrophes are taking place simultaneously.