Every(Re-)Action | Donors Say they Plan to Continue to Give in 2021: Chronicle of Philanthropy 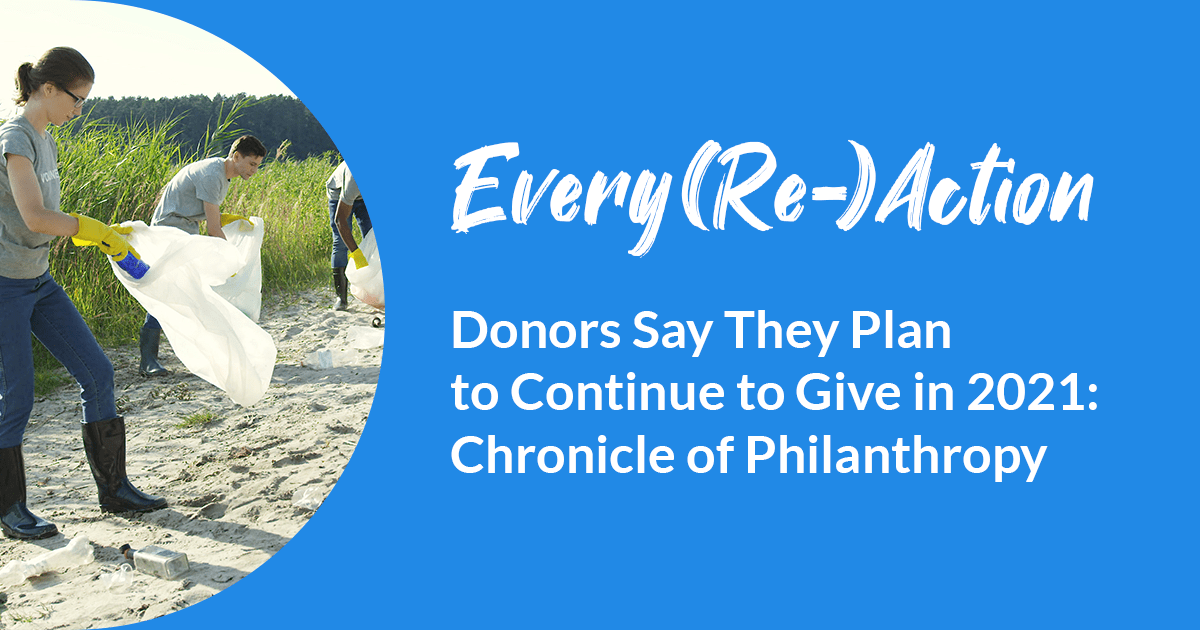 According to the Chronicle of Philanthropy’s February 11, 2021 article “Donors Say they Plan to Continue to Give in 2021,” two new studies have good news for nonprofits: donors intend to keep the generosity coming in 2021.

The Chronicle reported the studies’ findings:
–    87% of respondents said they intended to make a contribution this year;
–    Nearly 20% said they would make even bigger gifts to charity than they did last year;
–    A majority of donors — 51% — gave as usual, despite the pandemic; and
–    28% said they increased their contributions after the public health crisis emerged, while 21 percent said theirs were smaller.

For nonprofits looking to acquire and steward millennial donors, these studies had encouraging news. One of the two studies, which interviewed mostly millennials, found that “55 percent of millennial donors expect to contribute $500 or more this year, compared with just 26 percent of baby boomers who plan to give that much.” Additionally, the other study found that “roughly half of respondents in this age group said they volunteered with nonprofits, and 60 percent said they spread the word about nonprofits among their peers.”

Our take: As Baby Boomers exit their prime giving years and nonprofits seek out support from Gen X and Millennials, new evidence like this can power your fundraising and engagement strategies.

Evidence suggests donors respond to multi-channel fundraising strategies. Although one of the studies found that “online donations were the preferred way to give among all respondents,” almost 30% of donors “liked having a nudge from an email, letter, or other communication to get them online.”

Our take: Nonprofits looking to more effectively reach your donors should pursue a multi-channel strategy.

Planned giving is for everyone. One survey found that 21% of donors aged 18 to 29 “had included a nonprofit in their will.” Surprisingly, that number decreased for donors between the ages of 30 to 44 and 45 to 60.

Our take: If you’re looking to diversify your planned giving portfolio, examine your existing donor file – it could contain more support, and more long-term donor retention, than you had anticipated.

Stewarding different donors in different ways shouldn’t require more work. With EveryAction’s purpose-built platform, you can see all your donor details in one place, optimizing and personalizing your programs across channels to raise more for your mission. Talk to us to learn how.