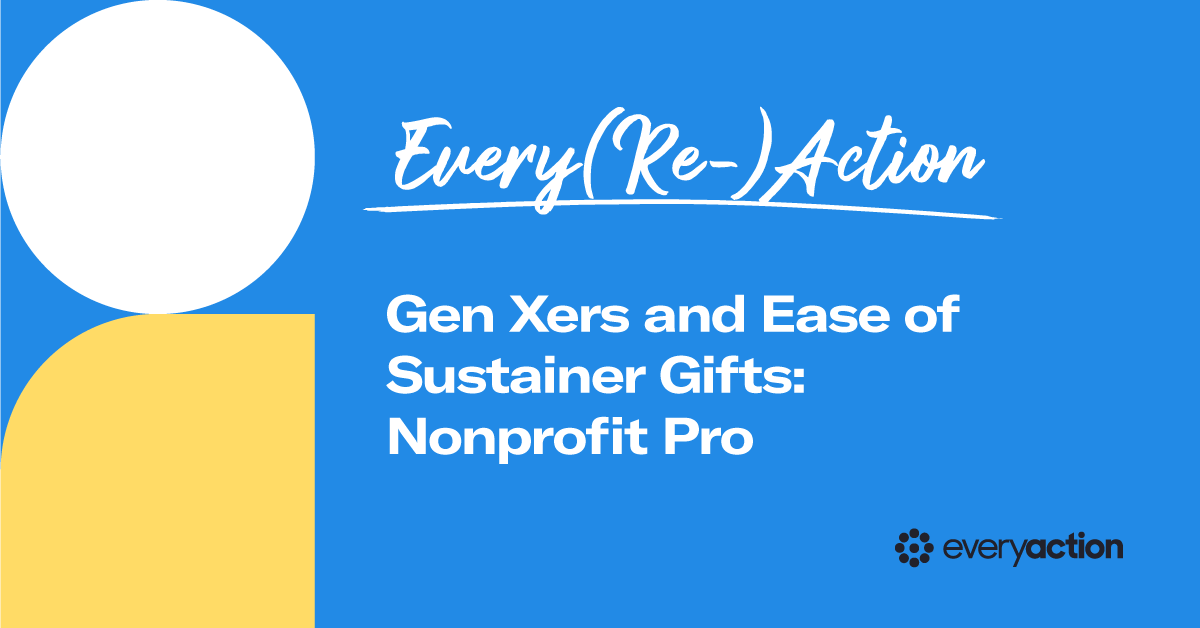 Monthly gift programs — also known as sustainer programs — do a great job of attracting donors across generations. After all, they’re great vehicles for building long-term relationships, diversifying your nonprofit revenue, and raising more for your mission. But don’t take our word for it: our friend Erica Waasdorp, writing in Nonprofit Pro the other week, points to findings from a recent RKD Group study on nonprofit supporters in Gen X, and notes that many supporters are fans of straightforward, easy giving methods — and that makes them a natural match for your sustainer program.

RKD Group surveyed 2,000 U.S. donors online in March of 2020 to compile their Nonprofit Marketer’s Guide to Generation X. Each respondent gave at least $100 in the previous calendar year, and the respondent sample provided equal representation to women (50%) and men (50%), as well as each demographic surveyed (33% each of Millennials, Generation X and Baby Boomers.)

Two Generations in One

One of the survey’s biggest findings? “Generation X is actually two generations in one” — older Gen X was born from 1965-1973, and younger Gen X was born from 1974-1983. Waasdorp notes that although Gen X occupies these two segments, they share motivation for giving: interest in making a financial impact, and their belief in the causes they support.

When it comes to educating these two groups about your cause and motivating them to make gifts, RKD Group points out that “the defining divide coincides with the rise of digital technology[… so] understanding this split will help nonprofit organizations align their marketing and fundraising to connect with Gen X donors.”

Another key survey finding was that younger Gen Xers have the highest average income, but not the highest percent of household income going to charitable giving. If we wanted to speculate, we could say this is because they’re saving for big life expenses, paying down debt, or aren’t yet making estate gifts like their elder Baby Boomer counterparts, whose incomes are on average lower but who give a slightly higher percentage of their income. Regardless, for donors who are selective about where they direct their charitable dollars each year, a sustainer program designed to help donors make a small monthly commitment rather than a large lump sum gift makes donating more accessible.

Gifts by Method and Sustainer Programs

If you’ve been keeping tabs on Millennial trends in giving, this doesn’t come as a surprise: Fidelity Charitable found that Millennials, in an attempt to send funds directly to causes they care about, are more likely than older generations to donate outside of traditional nonprofit channels, like Kickstarter and GoFundMe. They’re also more likely to think of their financial lives holistically, and this includes where they spend their money, where their wealth (if they have it) came from, and where it should go in the next generation.

We know sustainer programs can help nonprofits build long-term relationships with supporters, but what does that mean for Gen X? Annually, the survey says, older Gen X supports an average of six causes, while younger Gen X supports eight.

At the same time, when asked about their relationships with organizations, only 25 percent of older Gen X reported giving to the same organization for the last three years, while that number was 53 percent for younger Gen X.

Many donors also enjoy receiving something in return for their gift, but the survey has good news about Gen X’s preferences: as Waasdorp puts it, Gen X likes receiving “exclusive content, but they are less motivated by member-only benefits[…] Exclusive content and access to people in the organization does not have to cost much and they’re a lot easier to create than member-only benefits.”

By becoming members of your sustainer program, your Gen X supporters can make commitments they’re comfortable with, and they can give financial support to more of the causes they care about. Additionally, as you’re building your strategy for engaging and retaining your Gen X sustainers with exclusive content and access, Waasdorp suggests asking yourself, “What would make [sustainers] feel really engaged? What really shows how their gifts are making a difference?” Get creative, but don’t reinvent the wheel: borrow successful engagement tactics from other organizations, reuse existing content in new ways, and inject your own nuance and style into it with storytelling and visuals.

We know the great donor demographic shift is happening right now, and that means your nonprofit fundraising strategy needs to shift too. Experienced nonprofit practitioners reliably point to sustainer programs as a way to bring in younger donors, who will soon step into the limelight as your primary giving demographic while Baby Boomers and Greatest Generation donors take their final giving bows.

Talk to us to learn more about how your platform can efficiently support your sustainer program growth goals.