Every(Re)Action | The Vanishing American Donor and How to Un-Vanish Them: The Agitator 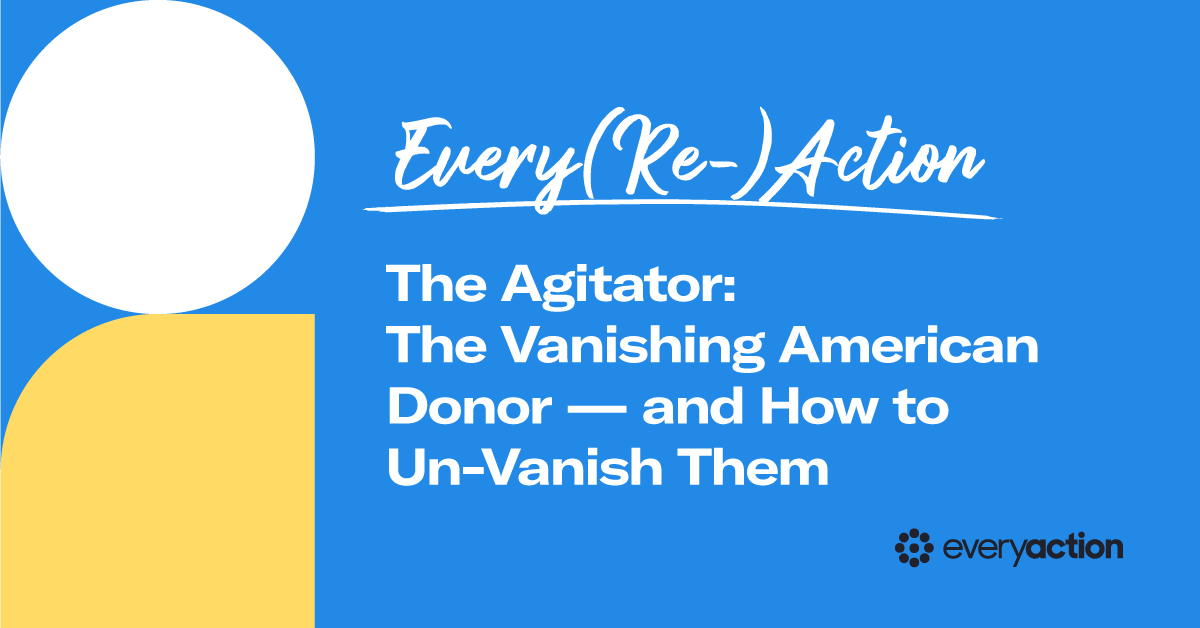 Our friend Roger Craver over at The Agitator caught our eye recently with this headline: the American donor is vanishing. Craver recommends four strategies to address this challenge, including a renewed focus on sustainers and planned giving.

How Fast is the Vanishing American Donor Disappearing?

Put simply, the number of households who donate to charity today is the lowest it’s been in two decades. This number didn’t come out of nowhere, either: “this trend of decline in the number of American donors has been occurring year after year for the 15 years we’ve been publishing The Agitator,” says Craver.

As reported by the Associated Press, a study published by the Lilly Family School of Philanthropy finds that from 2000, when 66 percent of U.S. households donated to a charitable organization, the number dropped to 49.6 percent in 2018, the latest year with comprehensive figures from the sample of 9,000 households studied.

Why is the American Donor Vanishing?

Craver lists a number of reasons this trend may be taking place, including but not limited to:

We’ve written before about how Millennials in particular approach giving differently than other generations—they’re more likely to forgo the traditional nonprofit route, skipping over institutions and instead giving directly to individuals. This can mean their generosity is thoughtful and highly effective, but more difficult to measure. Millennials also define charity impact differently than other generations, which affects their trust in institutions like nonprofits.

Financial pressures play into the trend of the vanishing donor, and we can point to their roots in the American wealth disparity. This disparity is profound: CNBC reports that in the first quarter of 2021, Federal Reserve data revealed that “the wealthiest 1 percent of Americans controlled about $41.52 trillion[… and] the bottom 50 percent of Americans only controlled about $2.62 trillion collectively, which is roughly 16 times less than those in the top 1 percent.” You can’t donate money you don’t have—that’s one reason we’ll be keeping an eye on the massive wealth transfer currently underway from elder generations to Gen X and Millennials.

Craver describes it as existentially important to “[pay] serious[…] fresh and deliberate attention to making the most of donors you already have and the precious few new donors you acquire,” because “mailing more and more topped off with deluges of digital[…] simply won’t cut it.” We have to agree: it’s crucial to test and find the right balance of messages and channels for each donor—flooding inboxes isn’t the answer.

Another pitfall to avoid? Concentrating too much time and attention on major donors, at the expense of other levels. “A heightened focus on major donors may save some work and financial pain right now,” notes Craver, “but in the end[…] organizations are likely to be faced with the problem of deep dependence on a small number of donors.” And this isn’t something that can be left for tomorrow, it’s a task fundraisers should take on today: as Craver describes it, “neglect of small gift and mid-value donors is the equivalent of salting the earth for future fundraising.” It’s clear: the time for fundraisers to take action and diversify their donor pool is now.

Like sustainer programs, mid-level giving programs give you a chance to build long-term relationships and retain your donors; and, if you steward those donors well, they’re more likely to make generous bequest (or planned) gifts to help you continue your mission long after they’ve passed on. And being attentive to bequest donors couldn’t come at a better time: at a moment when elder generations are in the process of bequeathing their wealth to younger generations and their favorite causes, there’s no time like the present to help your donors cement their legacies with your organization.

All of these strategies have something in common: the right platform can help fundraisers execute them more efficiently and effectively. With support from capabilities like predictive segmentation, fundraisers can easily identify the right supporters, to receive the right messages, at the right time. Talk to us to learn more.