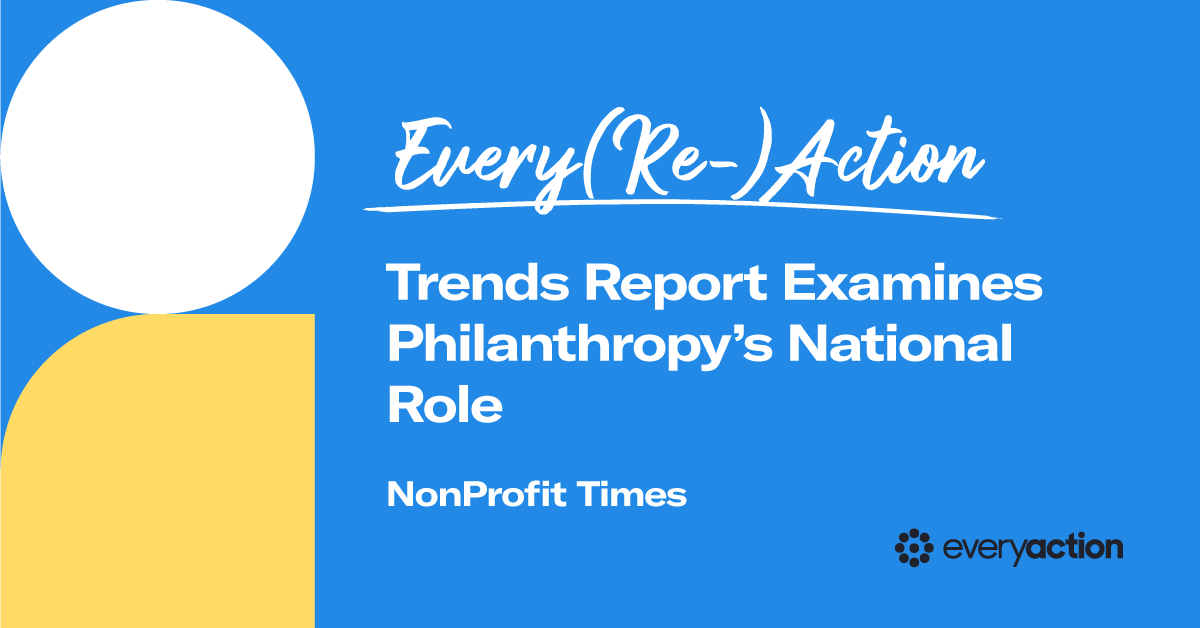 The NonProfit Times has reported that the Dorothy A. Johnson Center for Philanthropy at Grand Valley State University has published their sixth annual report on trends in giving. This year’s report covers eleven trends, with a guiding question of “What role does philanthropy play in our national project of e pluribus unum or out of many, one?” Included in those eleven trends is the segment Increasing Attention to the Decline in Household Giving to Nonprofits—here’s why these findings in particular matter to our sector, and a few ways to take action.

Reasons for compiling this report

A note from Executive Director Dr. Teresa Behrens opened the report with a reflection on the findings’ place in an urgent national moment:

“The philanthropic sector’s core work of harnessing private action to promote public good has been uniquely impacted. The urgency of addressing racial injustice and threats to democracy has influenced everything from how we define philanthropy and public good to how we use technology. The trends we explore in this report are ones whose roots predate the pandemic, yet their trajectory has been altered—perhaps permanently—by the events of the past two years.”

One trend particularly connected to the developments of the preceding couple of years was the continued decline in the number of households making donations—and why that trend deserves attention.

Increasing attention to the decline in household giving to nonprofits

The sixth trend listed in the report, a declining number of donor households, inspired researchers to ask, “If the funding mix of any nonprofit becomes increasingly dominated by major gifts from a few supporters, what might the practical and ethical consequences be?”

Research from the Lilly Family School of Philanthropy found that in 2018 the number of American households that said they give to charity dropped below 50 percent for the first time—and this finding raised “major alarm bells in the field.” The report acknowledges that it has been “known for a while that the wealth gap is becoming a giving gap,” and that while there was a slight reversal in this trend that began during the onset of the COVID-19 pandemic, it’s unclear if—and for which donors—the reversal will hold.

Overall, the report stressed that this trend toward nonprofits receiving more funds from fewer donors “raises the distressing possibility that the giving of ‘treasure’ to nonprofits might eventually be something only rich people do.”

The report dispelled the idea that there was a single explanation for this phenomenon. Among the many contributing factors were:

Among young people in particular, two additional factors seem to be especially relevant:

Nonprofit fundraisers who’ve been paying who’ve been paying attention to generational trends aren’t surprised by these findings. Millennials in particular have developed a reputation for prioritizing lived values over familiarity with nonprofit brand names, and take a more expansive view of the term ‘philanthropist’ than do prior generations.

What this giving pattern could mean for nonprofits

Changing power dynamics and the risk of raising less revenue are two reasons that nonprofits, particularly smaller organizations, should care about the downward trend in household giving.

The report cites a 2021 Urban Institute finding that maintains that “nonprofits with annual budgets under $500,000 said they relied on individuals for 30 percent of their revenue, versus 18 percent for larger organizations.” In short: smaller organizations are more likely than their larger counterparts to be reliant on a network of grassroots support—and the ability to fundraise effectively from a network like that affects their ability to conduct their critical work to advance their missions.

Also bubbling to the surface are questions of power dynamics in a shrinking donor pool. Could this trend, the report asks, “create a sort of two-tiered philanthropic landscape, where those with most of the wealth are privileged enough to give in the ways we measure and celebrate, while others only give in less formal ways that go mostly unrecognized?”

Further, if a small group of donors provide the majority of a nonprofit’s revenue, how might this influence the nonprofit’s mission, vision, or projects? With more questions than answers in this section of the report, we’ll be interested to see research on these developments.

How to combat the decline in household giving

At the close, the report included recommendations from researchers for reversing this trend:

Ultimately, the report posits, “expanding our conception of giving does not mean
we have to discount traditional giving to formal organizations, or to allow that to become a choice only for the privileged few. Philanthropy should be both/and.”

We may not have the power to make the kinds of sweeping (and necessary) public policy changes listed in the report—but what we can do is offer the right platform to nonprofits in order to make all aspects of their work as efficient as possible.

Whether your goal is to build a movement for policy changes like the ones listed in this report; grow a broad and consistent base of grassroots fundraising support, like in a sustainer program; or efficiently expand your fundraising across the right mix of channels, our mission is to help you further your own mission. Talk to us to learn more.