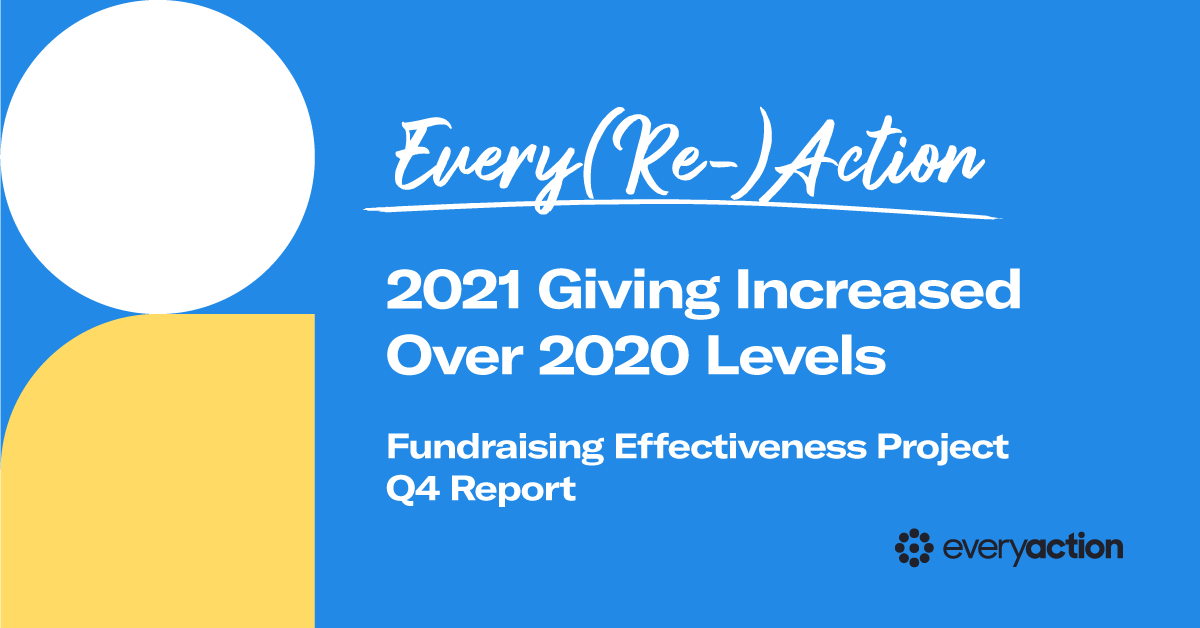 For many nonprofits, 2020 was a watershed giving year—and according to the Fundraising Effectiveness Project’s latest report, 2021 seems to have gone a step further.

The top line finding for 2021 was that giving grew by approximately three percent. These donations came from a smaller total of donors, meaning this increase in giving was driven by two main factors: a continuing trend of large charitable gifts coming from an increasingly concentrated group of donors, and a large body of 2020 donors returning to give again a year after being acquired.

Administered by the Association of Fundraising Professionals (AFP) Foundation for Philanthropy and The GivingTuesday Data Commons, the Fundraising Effectiveness Project (FEP) “publish[es] quarterly and annual reports that examine key fundraising metrics, serving as a benchmark for nonprofit executives, development staff and researchers.” Their latest report covers data from 9,618 nonprofits based in the U.S. that raised between $5,000 and $25 million. The data for this report analyzes $10 billion in donations from a total of 18 million donors. The full report is available on the FEP website.

A few of the report’s key takeaways were:

Here’s what these findings could mean, and how fundraisers can respond.

1. High-dollar donors and donors who were retained from 2020 helped nonprofits increase their dollars earned year over year in 2021.

According to the Fundraising Effectiveness Project, two factors seemed to drive a three percent increase in dollars raised for 2021: retained donors from 2020, and large-gift donors.

The report identifies donors by their relationships to nonprofits in four ways:

Of the four categories, the report found that new retained donors from 2020 were the only ones with positive retention rates. Put another way, donors acquired in 2020 were likelier to be retained than repeat retained or recaptured donors. In fact, the large spike in new donors for the year 2020 led to “an incredible increase of 26 percent in newly-retained donors [in 2021.]” This surprisingly high retention rate helped nonprofits raise about three percent more funds in 2021 than they did in 2020—an accomplishment that’s remarkable, given 2020’s crisis giving spike.

Midsize and larger donors were another main driver for organizations increasing their total funds raised in 2021 from 2020. Donors who gave over $500 were responsible for over 90 percent of the dollars raised by nonprofits in the Q4 report, and donors who gave $500 or less generated the remaining under 10 percent.

Organizations that want to continue retaining 2020 donors should consider:

2. New and small donors are not being acquired or recaptured, driving down donor counts.

The Fundraising Effectiveness Project’s report divides donors into segments by giving amount, based on donors’ total year-to-date dollars given:

These findings line up with general trends of shrinking donor numbers, particularly among donors who give smaller amounts. There are multiple causes for a reduction in the total number of households giving to charity: the Dorothy A. Johnson Center at Grand Valley State University said in a recent report on the role of philanthropy in democracy that systemic factors like wealth inequality and skyrocketing student loan debt had likely been partially to blame for decreases in the number of households who give to nonprofits and giving becoming more and more concentrated among individuals with wealth.

Additionally, our friend Roger Craver has written about the “vanishing donor,” or the shrinking pool of donors due to the generational shift currently taking place: as Baby Boomer and Greatest Generation donors exit their prime giving years, and Gen X takes their place, development teams are facing the need to fundraise the same amount or more from a smaller cohort of donors.

This is why tools like EveryAction’s Fundraising Optimization Guides can be so useful: if your platform can identify donors with the highest likelihood of lapsing, upgrading, or initiating a sustainer or planned gift, nonprofit staff can spend more of their time on building the right relationships, with the right supporters, at the right time.

3. Large and highly committed donors are sticking around—but small, infrequent, and new donors are being left behind.

The Fundraising Effectiveness Project said in their report that because 2020 was such an outlier year for fundraising, comparing results between 2019 and 2021 would be helpful in spotting trends and pivoting strategies. When comparing 2019 to 2021, the FEP found that overall giving rose by 11 percent from 2019 to 2021, while the overall number of donors dropped by less than 1 percent. The donors who were likeliest to make up that 1 percent drop were small, new, and infrequent donors, especially the 70 percent of donors who gave only one donation per year.

“Overall, donor numbers are down largely due to weak acquisition of new donors in 2021 and diminished recapture of lapsed donors, especially in the small-donor segment. That long term reduction in donors and retention of donors is something nonprofits should focus on addressing for the rest of 2022 and beyond,” said Ben Miller, SVP of Data Science and Analytics at Bonterra. “Although we’re seeing the donation totals increase, we aren’t seeing the number of donors keep pace, which means this trend isn’t very sustainable and deserves more attention from fundraisers.”

Nonprofits can use their digital strategy to grow an authentic connection with donors of all sizes in an effort to prevent them from lapsing—the key is to engage them with messages that keep them educated about and invested in your mission, without overwhelming them with too many contact attempts. Segmenting your donors into different audiences, based on behavioral and demographic data; using automation to send them stewarding messages that keep them involved; and ensuring those messages are visually engaging and easy for your staff to build can help your supporters develop a stronger attachment to your mission and their role in helping you advance it.

Acquiring new donors, tracking and analyzing their behavior, adapting to new data and trends, and retaining support for the long run might sound complex—but with the right platform, it doesn’t have to be. Talk to us to learn more about how a unified or highly-integrated CRM can support your organization’s fundraising and engagement goals.