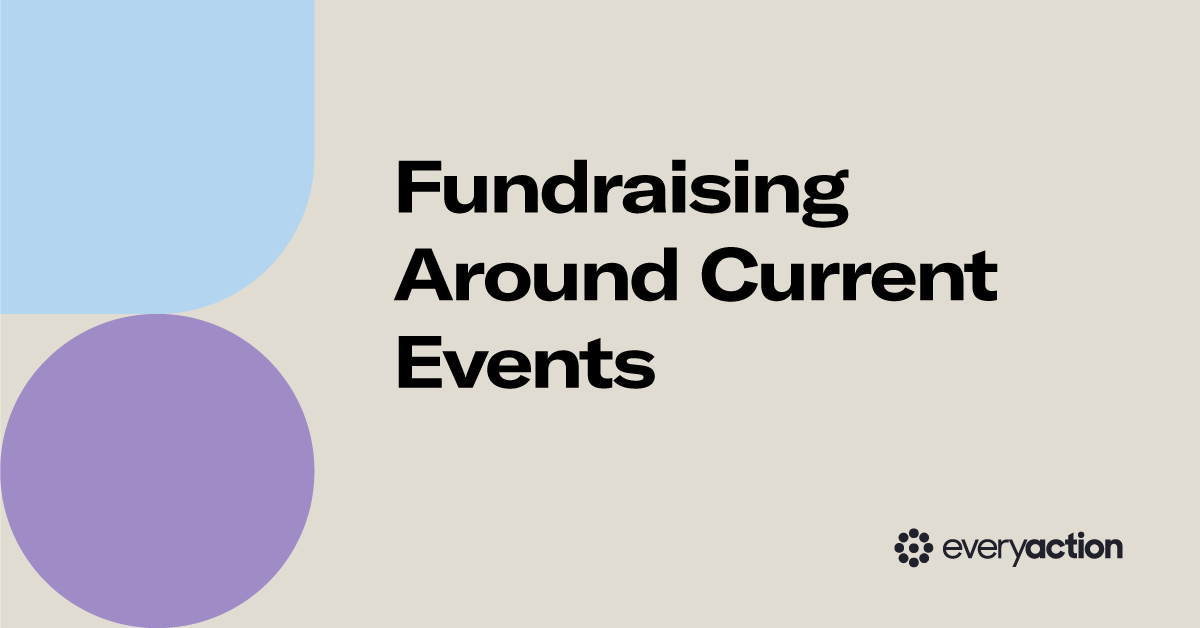 Development officers at any nonprofit will tell you creating successful fundraising campaigns can take months of careful planning, communication, and a lot of teamwork. But sometimes you are presented with an opportunity to fundraise around a current event that requires immediate attention and does not afford you the normal timeline for planning. That’s exactly what happened less than a month ago when Betty White passed away just a few weeks before her 100th birthday.

In this article, we’ll discuss a few ways nonprofits can learn how to expect the unexpected and take advantage of opportunities when they present themselves. But before we continue, it’s important to recognize the contribution of people like Betty White who use their talents, energy, time, and their voice to support nonprofits providing critical services around the world. Thank you all!

How to recognize current events that can impact your organization

Sometimes it’s hard to know when a current event will spark a cultural phenomenon and present an opportunity for your organization. The term “expect the unexpected” can seem oxymoronic, but there are a few things you can do to put your organization in a position to recognize these events.

To start, keep a list of topics and keywords handy. They should be contextually relevant to your industry or meaningful to your organization directly. A great way to do this is by setting a Google alert or following a hashtag list on your favorite social media platform. When that word starts to trend, you’ll immediately get notified and can spring into action.

When the #BettyWhiteChallenge started to trend, a rescue shelter director created a graphic to memorialize White’s commitment to animal shelters and shared it on Facebook, telling everyone to honor her by making her birthday, January 17th, the best yet for animal shelters across the country. White was almost as famous for her support of animals as she was for her work on the silver screen, so this was a fitting tribute!

Soon, the post had thousands of likes and was being circulated and shared by humane associations across the country. American Humane quickly jumped into action with a fundraising campaign that raised more than $25,000 in just a few days.

Don’t sweat the small stuff… or the big stuff

In 2020, Delaware Humane Association re-homed a dog to then-presidential candidate Joe Biden. When German Shepherd Major was adopted, he became the first rescue dog in the White House and DHA started planning the first-ever Indoguration™ campaign to highlight the needs of rescue dogs across the nation. They started with a small goal to raise $10,000 and thought they would see what happened.

Often, nonprofit organizations don’t attempt ambitious fundraising campaigns because they believe they’re too small or won’t have the support they need to pull off such an event. The Delaware Humane Association is just 45 people and they’re amazingly busy placing nearly 2,000 animals per year. They could have easily decided this event was too much work and called it quits on several occasions, but they stayed the course.

When asked about their secret to success, the campaign coordinator commented they were careful not to sweat the small stuff or the big stuff. They simply got out of the way of their supporters, sponsors, and others who offered help. Sure, there were still planning meetings and details to be worked out, but they didn’t stress over the event, they didn’t invest millions of dollars in new media equipment, and they didn’t spam their supporters with repeated appeals. They created a simple donation form and let the event take shape organically.

In the end, more than 7,000 people joined the virtual fundraiser with 12,000 individual donations helping DHA raise more than $200,000 in this single event. The Delaware Humane Association now holds a world record, certified by Guinness Book of World Records, for the most pets on a Zoom call… 5,000 pets!

In each of the cases mentioned above, these extremely successful campaigns were implemented with just a simple donation form and a few emails—just three pieces of technology to make it all happen. Their nonprofit CRMs helped identify the right supporters to communicate with. Email communication called those supporters to action with a timely and contextually relevant appeal. And fundraising software made quick work of creating the donation forms and processing the donations. At EveryAction, we strive to make all our fundraising software easy to use for our nonprofit partners, and it shows in the success of organizations like DHA and American Humane, especially when time is of the essence.

Taking advantage of a powerful fundraising moment shouldn’t mean more work for your team. Get in touch and we’ll show you how our platform of social good software can help you create that next big opportunity to change the world for the better!