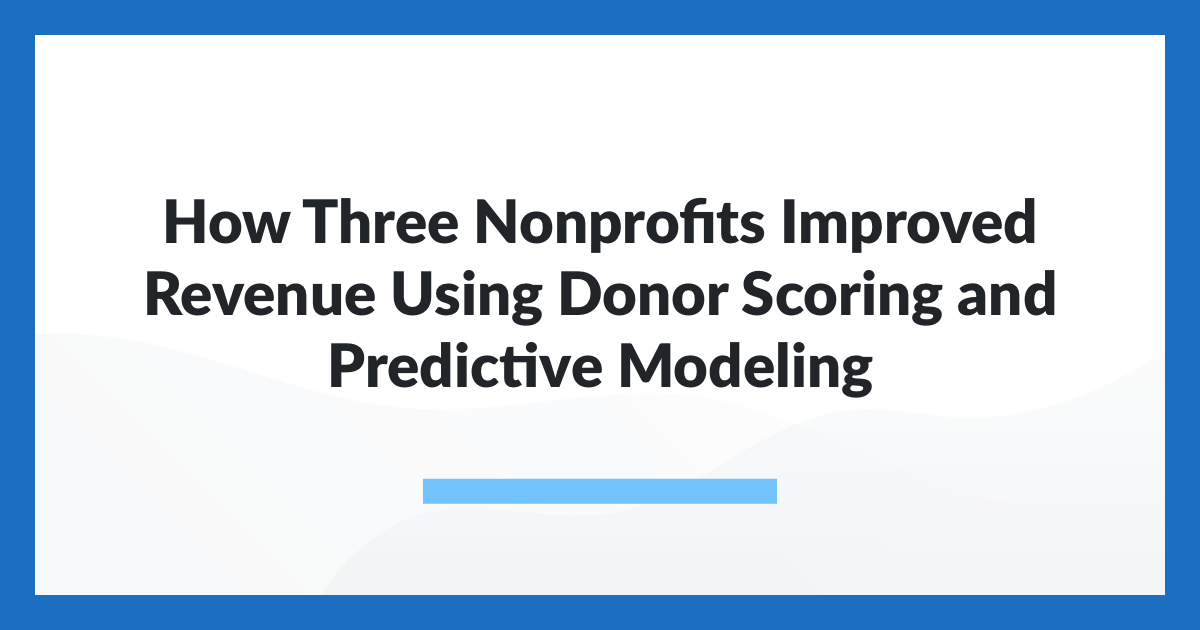 In our rapidly evolving digital age, there is often no shortage of data being collected. However, simply collecting data isn’t enough – data must be organized and analyzed before it can be used to answer questions and inform strategy. Predictive analytics tools like DonorTrends in EveryAction are one effective way that nonprofits can make their data work for them. Here’s how a few organizations are doing it!

DonorTrends is a donor scoring and predictive modeling software that helps nonprofits cut spending and increase the revenue of their fundraising programs. It runs existing donor contact information through proprietary data models and ranks your contacts against each other in order to identify the best prospects for any given program. The data generated helps development professionals focus their efforts wisely when running programs such as lapsed donor recapture, first-time donor retention, and sustainer, major donor, or planned giving upgrades.

How it works for three nonprofits:

The Salvation Army was planning a multi-channel – digital and mail – campaign with a match offer. Their goal was to maximize that match. In a previous year, they had contacted 83,322 donors, but because this year their ask would be a big “stretch” gift, they used DonorTrends scores to identify the top 5,000 donors most likely to upgrade. They asked these donors for three times their highest previous contribution (HPC).

The impact was huge. Salvation Army mailed 94% fewer donors than they had previously, at a far lower cost, and the net revenue of the campaign increased by 306%. This is a clear example of how targeting a specific group (5,000 donors) who are most likely to upgrade and making a big ask can yield huge results.

Common Cause was looking at ways to grow their efficiency and build out their in-house capacity, as opposed to relying on consultants. Common Cause identified an area in which they could cut costs – they were paying a lot for data segmentation. They found that they were able they could accomplish this with DonorTrends.

“One of the things I really like about it is that you can run a whole file across all channels, as opposed to a lot of more traditional or older reporting,” said Dalton Fuqua, Director, Membership & Development Planning at Common Cause. “You would be just looking at direct mail performance, because you weren’t necessarily looking at it across all channels. And so, you could feed in the internet giving, all the direct mail giving, and get a sense of what the health of the whole file is.”

DonorTrends has also helped Common Cause identify high value donors that their previous segmentation process had missed. “It’s just been really easy to use, and it’s been working,” said Fuqua. “In the early stages of converting to DonorTrends, we found that there was a segment missing from our previous selection process that was based strictly on RFM (Recency, Frequency, Monetary Value formula). The [tool] surfaced this large segment of donors that we weren’t mailing just because of a brilliant typo in an Excel sheet.”

In a direct mail campaign using DonorTrends, Common Cause contacted 6% more donors, which resulted in a 38% increase in the average gift and an overall 46% increase in revenue, compared to the previous year’s campaign. The 6% increase in contacts were donors who had an HPC of $10 or less but consistently gave in response to every acknowledgment sent to them, and were undetected by their previous RFM-based selection process.

Using the modeling system that DonorTrends offers helped make it easier for HelpMeSee’s Direct Marketing Manager, Nancy Hernandez, to know who she was talking to and communicate that across the organization. “We use the optimization tables even to get approvals on the campaign, which are so helpful because it really tells the story and it makes it easier to communicate with our leadership who’s not technical,” Hernandez said. “Understanding who I’m mailing to, [and] building the cost into the optimization tables allows us to make good decisions, especially when we’re working with shoestring budgets. It really helps us to make the best decision and to really maximize our outreach efforts.”

When attempting to upgrading donors, HelpMeSee used DonorTrends data to drive decision making. This included following the population that was most likely to upgrade, which the organization took advantage of in an August renewal mailing which performed well. The difference, according to Hernandez, was that it had a more aggressive ask string for that population, as well as incorporating other elements that contributed to the campaign results, performance, and success. The results? There was a 3% increase in response rate with an 18% increase on the average gift.

Looking for more information on this topic? Watch our recent webinar, “DonorTrends: Uncovering New Revenue in your Database” on demand. The webinar features testimonies from nonprofit experts and digs deeper into how these nonprofits specifically used DonorTrends, adapted their fundraising strategies based on organized data, and improved their KPIs across the board.