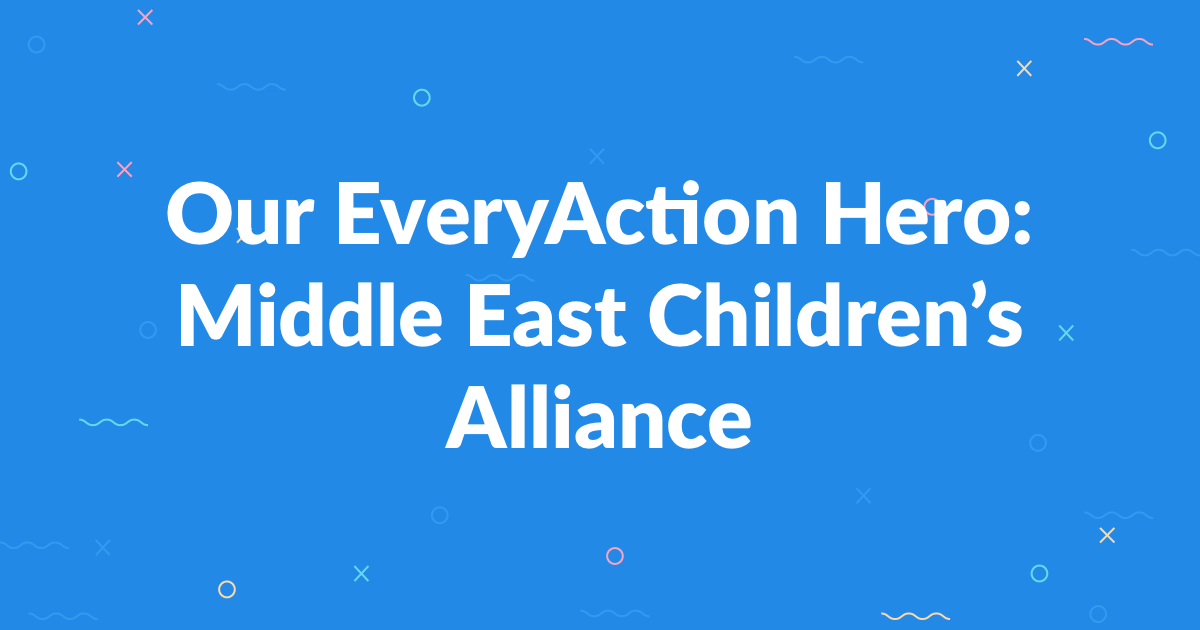 The Middle East Children’s Alliance (MECA) works to protect the rights and improve the lives of children in the Middle East through aid, empowerment and education. This year they’re celebrating 30 years of serving the region. With programs ranging from education, sports, income generation and more, we’re proud to stand with such an incredible organization!

Earlier this month I spoke with MECA’s Development Director, Deborah Agre, to talk about some recent campaigns as well as year-end strategy!

Congratulations on celebrating MECA’s 30th anniversary! Can you tell us a little bit about how you all got started and more about the work you do?

Over the 30 years of our organization, we’ve sent over 25 million dollars in direct aid consisting of food, medical supplies, books, and toys to Palestine, Iraq, and Lebanon. This is one of the landmarks we’re excited to celebrate this year.

The organization started when our founder Barbara Lubin was the president of the school board in Berkley. She was an engaged community activist and people kept coming to her and talking to her about what was going on in Palestine and asking her to speak out about it. So in 1988 she and a group of other local officials from around the country went on a delegation and met both progressive Israelis and Palestinian journalists, activists, and stayed at one point in a refugee camp in the West Bank. There were guards stationed everywhere throughout the camp and when she came back she knew that she wanted to do something for the children there.

Two years after MECA started sanctions were imposed on Iraq, which were ultimately were responsible for the deaths of half a million children under the age of 5. The organization sent medical aid specifically cancer medication to Iraq until 2005 when the U.S invaded making it virtually impossible to continue to get aid into the country.

Now in addition to our work in Iraq and Palestine, we also support Syrian refugees who are in Lebanon. We’re working with local grassroots community organizations to provide education programs, sports programs, medical aid, and winter relief.

There are so many different projects and campaigns you’re currently working on from humanitarian aid to education to medical aid. What is one campaign that you’re proudest of and can you tell us a bit about it?

If I had to pick one I would say the Maia project, Maia means water in Arabic, and according to a UN report 97% of the water in Gaza is unfit for human consumption. So this project, like most of our others, came from people on the ground. It was actually from students at a school in Gaza who met with our Director of Gaza Projects. She asked them if they could have one thing for their school what would they want, and they said water.

With the Maia Project we install water purification and desalinization units in middle and elementary schools. We now we have more than 60 units serving over 70,000 children!

So given that we’re in the midst of end of year fundraising season what are some of your strategies or campaigns for year end?

For Giving Tuesday this year we’re focusing on raising money to build a new water purification unit at a girls’ middle school in Gaza. For our whole year-end campaign, we have a series of one mailing, one mailing reminder, about 10 emails, and, of course, requests to major donors. In conjunction, we’re also doing a social media campaign using photo quotes from some of the more well-known people that have supported our organization like Noam Chomsky and Angela Davis.

Aside from online donations we also host a lot of events with speakers or performing artists as well as every year we have a two-day sale of Palestinian crafts and other goods. It’s very popular and a big way that people find out about us!

I subscribed to your email list and received a lovely welcome email. Can you speak a little bit to how you go about acquiring new supporters and how you get them involved and engaged in the work you’re doing?

When someone signs up for our email list the first thing they’ll receive is a welcome email followed by two informational emails before we start to fold them in with the rest of our subscribers. Especially at the end of the year, we get a lot of non-donors who are on that list that then convert to first-time donors. When there’s a crisis in the region we also see a lot of new subscribers coming in. In 2014, when there was an Israeli military assault on Gaza, we saw a lot of new supporters come in and we’ve managed to retain about 25% of them, which is a lot for “crisis donors.” When our issue is in the headlines we generally see a big increase in supporters but aside from that we just have to work hard to say in touch with those people who are first-time donors or sign up to our list!

As the Development Director, how do you use EveryAction on a day to day basis in your fundraising efforts?

The primary way we use EveryAction is in segmenting our lists and customizing our asks in email, mail, and for major donors, so we know we’re asking the right people for the right amount. That’s been really successful in EveryAction especially with features like the household function. Additionally, the email templates and donation pages are really easy to use. When we became EveryAction clients we created one-page donation forms which makes it both easier and faster for donors and cuts down on drop-offs from the donation page.

As someone who works in development what would you say is the role of technology in this field? How has it changed the way you interact with donors and supporters?

Email and online donation forms have changed fundraising dramatically. The invisible part of fundraising that people don’t really think about is segmentation. You should segment by gift level, how long someone has been a donor, how frequently they give and then you can target them with the right ask. I couldn’t do that without a good CRM.

To learn more about the Middle East Children’s Alliance visit their website here!