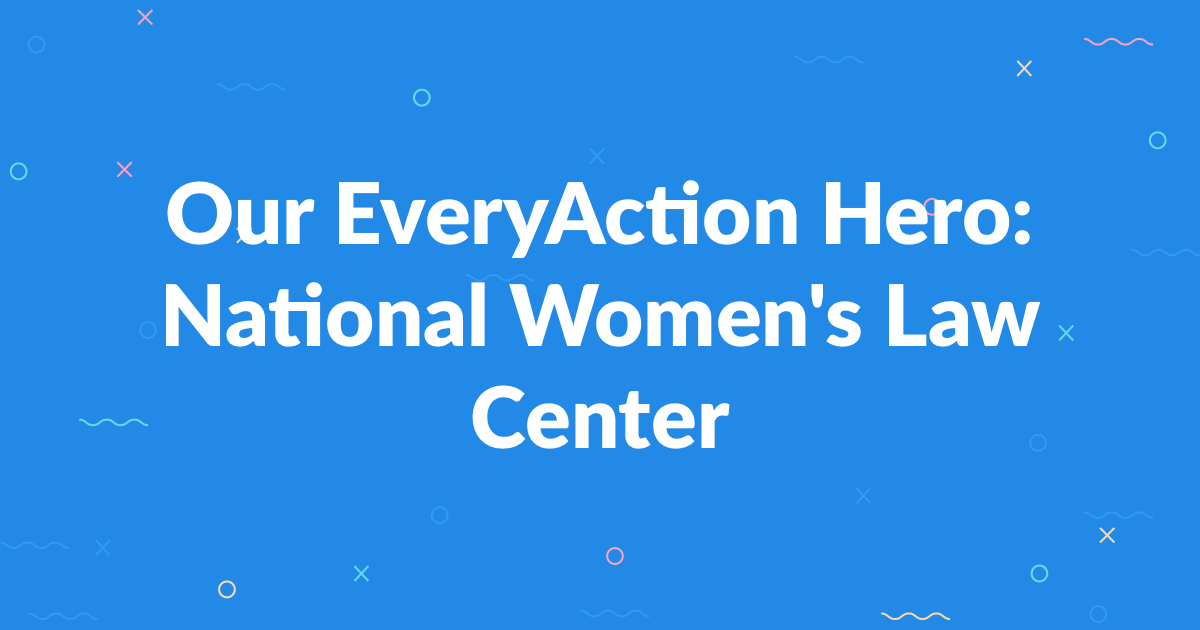 I recently chatted with Selina Tran, Digital Strategist at the National Women’s Law Center, about channeling this enormous wave of energy into action and how EveryAction’s unified platform has been essential to their mission.

How would you describe the mission of the National Women’s Law Center?

ST: The National Women’s Law Center has been around for 45 years, fighting for women and families. Something that makes us a little different is that we’re a multi-issue organization, so our work spans from educational opportunities for girls and women, to reproductive rights and health to economic security, to keeping girls and women safe from harassment and discrimination at work and in school. In short, we work on every issue that affects women. Our mission is to empower and help women and families through every stage of their life, through policies, laws, and public education.

Given the current polarizing political and social atmosphere—from healthcare to tax reform to Title IX and beyond—the National Women’s Law Center has been heavily involved in fighting the good fight on so many of these issues. What strategies do you use to keep your audience engaged and energized?

ST: Particularly in this political climate where it’s just one thing after another, it’s really important to highlight the victories so people don’t feel burned out. So while we draw attention to the terrible things happening around us, we also highlight our victories and supporters who make these wins possible.

Now more than ever, all of the various issues we work on intersect and affect people at different levels. It’s important to recognize that and make connections between these issues and explain why it matters. For example, when we talk about the wage gap we can’t ignore the fact that both race and gender discrimination play a part. We need to emphasize these things so that people can care, relate, and ultimately take action.

Speaking of recent events, the National Women’s Law Center along with Americans United for Separation of Church and State recently filed a lawsuit against the Trump Administration for rules denying women birth control coverage. You’re also using EveryAction tools to run an advocacy campaign around this very issue. What has been the response to your efforts on both ends?

ST: The response has been great! We’re seeing a lot of excitement around our stance—suing to protect birth control coverage—and we’re really encouraged by the response. We’ve seen a significant increase in donations because of the lawsuit.

The National Women’s Law Center created a number of EveryAction advocacy forms to target issues through regulations.gov. How have your supporters responded? Have you seen an increase in engagement?

ST: In the past, the National Women’s Law Center collected these responses and would manually submit them. Having the option in EveryAction to target regulations.gov has been a game-changer! Not only does it make it easier for us, it also makes it easier for our audience to submit comments directly. In fact, across all of our EveryAction forms, we’ve seen an increased rate in responses.

Helping women stand up for their rights and secure legal victories is so important and necessary. What other EveryAction tools or features have made it easier for the National Women’s Law Center to achieve these goals?

ST: The usability of EveryAction in general has been really great for us. We’re able to work faster and more efficiently. Before moving to EveryAction, it would take hours to get things out. With EveryAction’s customizable forms and targeted email, we’re able to respond to current events much faster with ease. We also love EveryAction’s reporting functionality. It’s user-friendly and we can easily customize reports as needed, giving us a complete view of our program. I’m also impressed with how quickly we can build an email and run a query. Not to mention how easy it is to set up advocacy targets in EveryAction. So, overall we’re more effective!

On the user end, I’ve seen a lot of good responses. Before switching to EveryAction, we would get a lot of emails from people annoyed at having to fill out an entire donation form every single time. With FastAction, we have the advantage of pre-filled form fields which not only makes supporters happy but also increases our conversion rates!

What advice do you have for other nonprofits working in the resistance sphere on using technology, data, or digital engagement tools to further the movement?

ST: It’s important, especially now, to make things as accessible and as easy as possible for people to be engaged and to take action. Tech, data, and digital engagement tools help us do that. It’s necessary to not only reach your current audience but to spread the word and reach even more people. At the National Women’s Law Center, we try to do that by making our presence known across all of our digital platforms. EveryAction gives us the opportunity to seamlessly add a share button for Facebook or Twitter that makes it really easy for someone to click and share and get involved!