Our EveryAction Hero: Rock the Vote 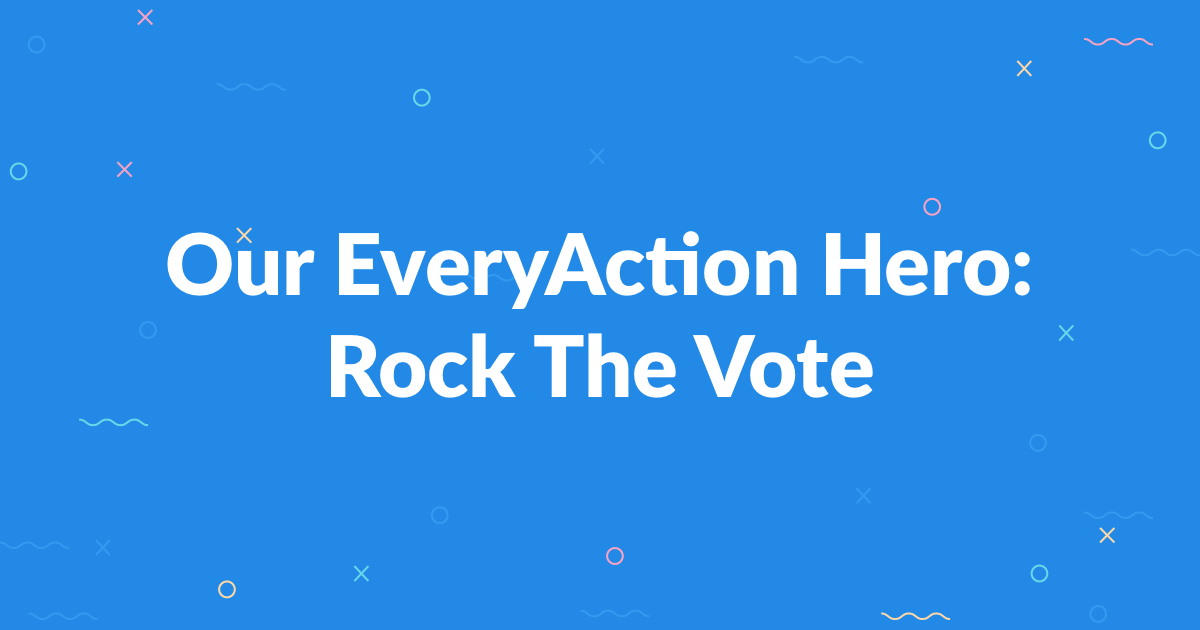 Rock the Vote has been mobilizing the youth vote for almost 30 years. From GOTV to grassroots organizing, their efforts have helped create unprecedented levels of engagement from young people.

We called up Jen Tolentino, Director of Policy & Civic Tech at Rock the Vote to talk about their mobilization strategy and the role of technology in organizing.

So for those who don’t know what you all do, tell us a little bit about the amazing work Rock the Vote does and how you all started!

Rock the Vote was founded almost 30 years ago in 1990, out of the anti censorship movement. Censored musicians, rappers, and record producers began to push back and create a movement to organize young people who would care about this issue. One of the largest hurdles they found was the gap between youth who were passionate about the issue and youth who were voters. Here came the idea that if we want to have an impact on the issues we care about, such as censorship, we need to build the political power of young people. In the 90s Rock the Vote actually helped pass the NDRA that expanded voter registration to all federal offices. We also partnered with musicians like R.E.M. to put voter registration cards in all their album and with brands like MTV to spread our message. Today, the internet has really changed how we digitally organize young people. The foundation of Rock the Vote is identifying young people as an untapped resource and getting them to understand their political power and leverage it for good.

Rock the Vote centers its campaigns around turning out the youth vote. What goes into these campaigns and is there one in particular that you’re especially proud of?

Our focus here at Rock the Vote is on young voters who are not currently engaged. So that includes people who aren’t registered to vote or don’t know they need to re-register even when they move within the same city. To reach them we have two buckets of work. One is doing advocacy around ensuring voting rights and access to democracy work for young people. This includes pre registration, automatic voter registration, early voting, same day registration, and more. The other piece of it is how do we get young people to understand the importance of their vote. This is where all the content we create, our work with influencers, and the distribution of civic education pieces comes in.

I think one of the most interesting and impactful programs that we’re re launching is “Democracy Class”. It’s essentially a curriculum on the history of voting rights and the importance of voting. It walks high school students through why their vote matters and goes into the history of voting rights movements. So we partner with school districts and teachers across the country to start getting young people, even before they turn 18, to understand how government works and how they can leverage it to make change in their communities.

So now that we’re on the other side of the midterm elections what comes next for you all? How do you keep that momentum building?

For us, it’s been a challenge to get even the general population excited and engaged about midterms. So the fact that we had any momentum in 2018 itself was really exciting, and that’s the narrative we’re focusing on. We’ve made a lot progress and dramatically shifted turnout expectation for the youth vote in 2018. We’re keeping that in mind for what’s possible in the future and the change that we can potentially see if we show up in 2020. We’re talking about the future created if young people participate and vote.

It seems like a lot of your engagement relies on grassroots and relationship organizing. How do your campaigns work to mobilize people at the individual level whether it’s sharing something on Facebook or hosting a voter registration drive?

We try to identify local on-the-ground partners that could use some of our support, like emailing our members to let them know there’s an organization near them that could use donations or volunteers. We’ve had a lot of young people want to be involved directly in their communities so we try to direct them to partners that work in the field. The other piece that we do around this type of mobilization is putting together toolkits with graphics and messages people can share with their friends encouraging them to vote. We also have a phone banking tool that is populated with contacts so people can can call young voters in swing states.

Rock the Vote uses EveryAction forms for event sign ups, advocacy, and finding your elected officials. It allows you to see all the ways your supporters engage with you. How does having this encompassing view of your supporters help you talk and engage with them?

One way we use EveryAction is to send out election reminders to our entire list about every upcoming election they might have. Not only as a reminder to vote but as a reminder that in case they’ve moved to re register. We’ll generally send an email with their current registered address and remind them that if it’s incorrect to make sure they register before their deadline. Just including that piece of information we’ve found significantly increases our engagement. Additionally, from using EveryAction forms for our online petitions we’re able to capture a lot of contact information that helps us send targeted election reminders that get as specific as city council district elections.

Since we can also see what types of advocacy actions our audience is engaging with we know what issues matter most to them. So if someone signed a petition on gun violence or net neutrality we can use that to inform our GOTV messaging if for example a gun violence prevention measure is on the ballot for a local or state election. It enables us to know enough information about someone to mobilize them in targeted ways.

How has Rock the Vote used technology in innovative ways? Can you talk a little bit about your Online Voter Registration platforms, widgets, and API work. I heard you integrated it with EveryAction as well?

All of their contact information from this form is captured and automatically gets populated into our EveryAction Account. It makes it super easy so that we have the two systems talking seamlessly to each other so we don’t have to worry about uploading or moving data. The online voter registration platform is freely available and a lot of partners in the nonprofit space use it for civic engagement.Organizations like March for our Lives and Voto Latino use it, and because we already have that EveryAction integration built in other users can utilize it to their benefit rather than continually uploading excel spreadsheets. It all happens behind the scenes!

Rock the Vote has been everywhere the last couple of weeks! It’s incredible and I imagine that means an influx of new supporters filling out your forms or signing up for your email list. How do you engage with new supporters and get them involved in your work?

We utilize a welcome series in EveryAction so we introduce people into our email list, introduce ourselves, talk about our values and then include options for people to self segment into what additional lists they want to be a part of beyond just updates and election reminders. It allows us to immediately communicate with people as soon as people enter into our universe so there’s not a drop off where they won’t get email from us until months later and not remember who or how they got into our system. We make sure we respond to people immediately so they get to know us and what they can be doing with Rock the Vote.

To learn more about Rock the Vote visit their website here!