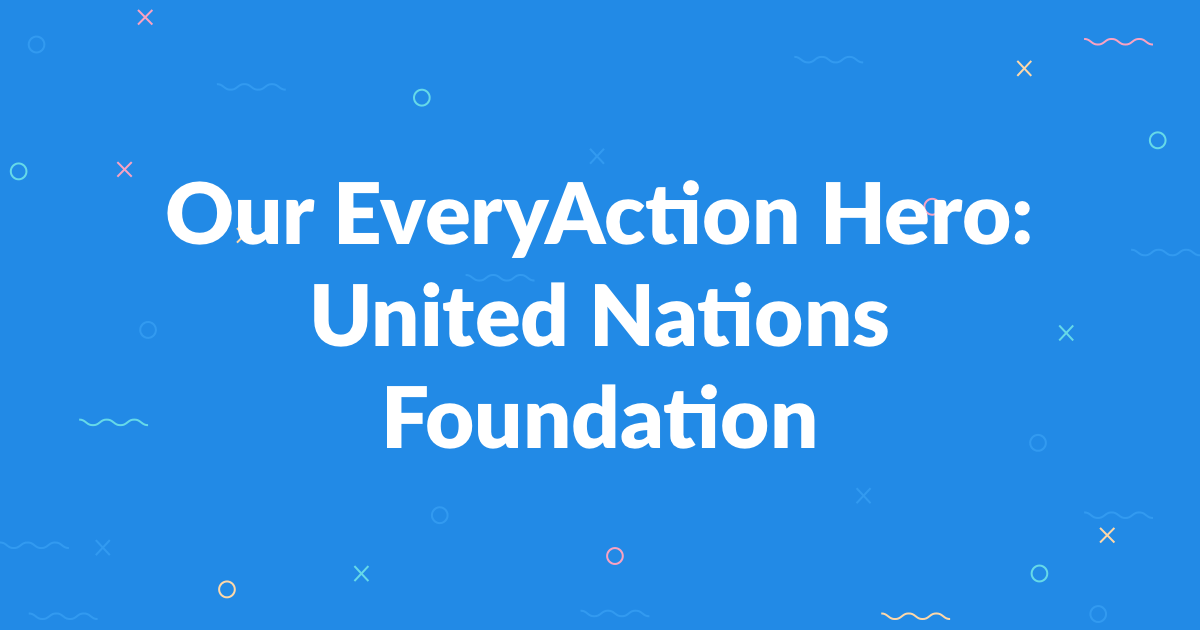 Created in 1998, the United Nations Foundation links the United Nations’ work with others around the world, helping the UN address a range of global issues, including climate change, global health, women’s empowerment, peace and security, poverty eradication, and more.

Their impact also carries over to #GivingTuesday, the biggest giving day of the year. Launched in 2012 by 92nd Street Y in partnership with the United Nations Foundation, this annual day of giving turned global movement mobilizes millions of people worldwide to donate to nonprofit organizations and charitable causes.

I recently caught up with AJ Jacob, Digital Development Officer, at the United Nations Foundation to discuss their innovative campaigns and initiatives, #GivingTuesday, and how making the switch to EveryAction has been a game-changer.

Let’s start with the basics. What does the United Nations Foundation do?

AJ: Our mission is to support the work of the United Nations and to connect people and resources to the UN. So, that’s connecting resources, as in actual dollars, connecting individuals that want to learn more about United Nations causes, and making that information accessible.

The United Nations Foundation has a very distinct role in the evolution of #GivingTuesday. Can you tell us a little bit about UNF’s history in shaping this global movement?

During #GivingTuesday, we have helped amplify the movement and our partners. This year, we’re expanding our focus on fundraising for the United Nations Foundation, which is an exciting process to be part of.

Every day—and especially on #GivingTuesday—the United Nations Foundation raises awareness and funds for a wide range of humanitarian issues and initiatives. What are some of your favorite campaigns that have capitalized on this global day of giving?

AJ: I don’t know if I can pick a favorite campaign—that’s like picking your favorite child! I will say, I think our campaigns do really great work around #GivingTuesday. This year, the message of our campaign is “Give like the world depends on it.” That’s a reflection of the climate in 2017, as we’re seeing big challenges to international engagement in many places. So, this is a really weighty moment for the United Nations and the United Nations Foundation. It’s a call-to-action for individuals to participate and recognize that their involvement—including every dollar—really does make a difference.

From the initial #GivingTuesday campaign in 2012 to the enormous response since its launch, the United Nations Foundation has seen it all. What are some recommendations you can give to nonprofits looking to stand out this year?

AJ: The number one thing about #GivingTuesday is that it isn’t solely about the Tuesday after Thanksgiving. Don’t fixate on the date. For instance, the United Nations Foundation is launching its campaign in early November. You should think of it as a whole month of giving and the week of Thanksgiving is a whole week of giving. Secondly, it’s more about creating a mood, rather than the 24 hours itself. It’s essentially building a culture of philanthropy.

On #GivingTuesday, you can expect a high volume and high level of competition for inbox placement—across nonprofits, retail, commercial organizations, and more. It’s difficult to stay on top of your inbox during that 24-hour window. So, in terms of planning your #GivingTuesday campaign, remember that it takes place across the whole month and serves as a springboard for end-of-year giving in December.

The United Nations Foundation recently made the switch to EveryAction. What are some EveryAction features that you’re excited to use as you head into year-end fundraising?

AJ: EveryAction’s interface is refreshing and huge for us. During the giving season, donors are really focused on your emails. They’re on the go and often on their phone, so you’re leaving a lot of money on the table if you’re not catering to these individuals. So, across the United Nations Foundation, we’re really excited that EveryAction’s interface is so functional, refreshing, and responsive.

Additionally, we’re excited to use EveryAction features like the list building tool and activist codes to zero in on our audience and understand them in ways that weren’t possible before.

This one’s a doozy but before I let you go, any thoughts on how technology and the digital space is important to your work?

AJ: One of the core tenets of the United Nations Foundation’s mission is connecting individuals to the United Nations. The UN is a large entity, so helping to make it more accessible is core to our mission. When you’re talking to every day people, technology is what you lean on. That’s how people are interacting with us on a day-to day-basis. That’s why I think it’s so important for nonprofits to really focus on their tech and to make sure their user experience comes through. That’s really how your supporters are connecting with you, and you can’t do any of the work you do without your supporters—from grassroots to high net worth. No one wants to arrive on a fundraising page and have an unpleasant user experience.