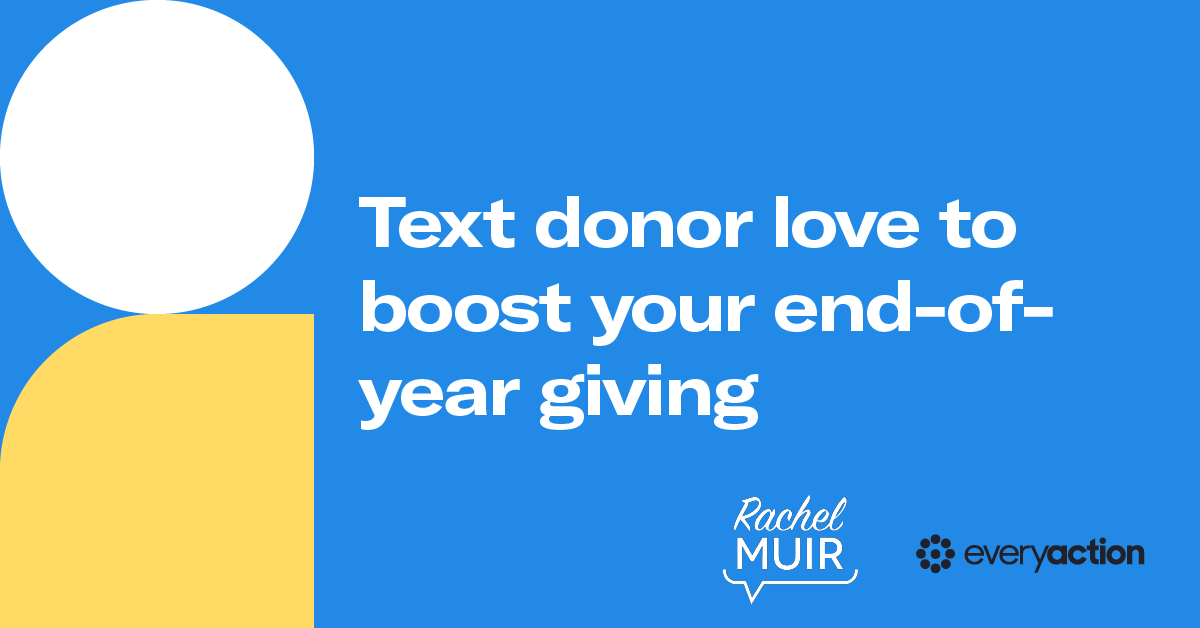 End-of-year fundraising can feel like a noisy cash grab. The subject lines in your inbox might be shouting, “Donate now” or “Urgent, just a few hours left!” or “MAKE YOUR DONATION BEFORE MIDNIGHT.”

Is there something you can do now to influence their end of year gift? Something that makes you stand out and lets your donors feel like the heroes that they are?

Yes! Warm your donors up with some thoughtful stewardship through a channel that will help you get through: mobile.

It’s clear: texting is now the status quo. It is the 21st-century version of a phone call.

What should you text your donors?

Imagine getting a thoughtful text message around Thanksgiving from one of your favorite charities.

They tell you how your gift made a difference. Or that they’re thinking about all they have to be grateful for and you are at the top of the list. Maybe they mention how your gift helped a person or solved a problem and include a photo (or emoji.)

It could be as simple as “I thought you’d like to see what your support made possible.” Or “You made your gift earlier this year and already you’ve (insert amazing accomplishment here.)” Two weeks later, you get their end-of-year appeal in the mail. Think you’ll make a gift?

If you are on the fence wondering if this strategy works, let me show you some proof.

Renowned fundraising researcher Jen Shang PhD, the world’s first philanthropic psychologist, and co-founder and co-director of the Institute for Sustainable Philanthropy found that donors getting an email stewardship piece before the ask gave $45 more than those who did not. This represented a 67% increase in giving!

In another study done with 50,000 donors at Food for the Poor, half received an extra thank-you at the beginning of the year. It was a simple expression of gratitude for past generosity with no ask or reply device included. The other 25,000 donors did not receive this extra thanks.

More tips for texting your donors

Are you ready to get on your donors’ nice list this year? Understand that stewardship is not a cost center; it’s a revenue center.

Thank the donor for their impact before you send them your appeal. Send them a quick text telling them how their last gift supported your work, and let them feel the joy of the difference they made. Knowing their gift made an impact is what motivates your donors to give again!

A small morsel of thoughtful fall stewardship—be it a text with a thank you photo, a holiday card, a call just to say thanks, or a video email message to thank them can go a long way not just to boost your end-of-year results, but to build strong donor relationships for years to come.

For even more time-saving tools for stewardship, grab this cheat sheet of virtual tools and read up on ideas to steward your supporters with 23 ways to delight donors!

About the author: Rachel Muir, CFRE
Rachel has worked every side of the Rubik’s cube that is the nonprofit sector. When she was 26 she launched Girlstart, a non-profit empowering girls in math, science, engineering and technology in the living room of her apartment with $500 and a credit card. Several years later she had raised over 10 million and was featured on Oprah, CNN, and the Today show. Today Rachel delivers workshops and offers a monthly membership, League of Extraordinary Fundraisers, transforming people into confident, successful fundraisers.