4 Lessons on Grant Applications from The Bachelor 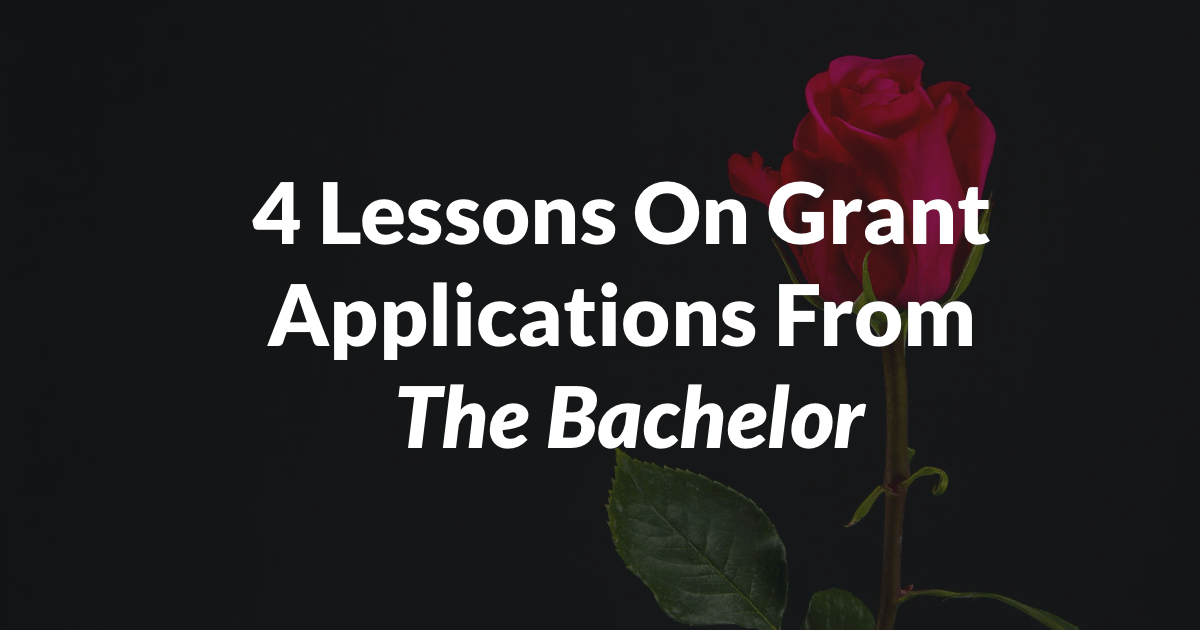 In honor of this week’s The Bachelor season premiere, we’ve been thinking a lot about the parallels between fundraising work and competing for love on reality TV. While we doubt Neil Lane has much to do with your nonprofit’s mission, there are a handful of wisdom-diamonds to be found in the mine that is Monday-night television. What is the best strategy to get noticed by the object of your funding affections, work effectively with peers, and cultivate resilience? We’re not Reality Steve, but read on for spoilers on all that good stuff.

1. In every proposal, whether it’s for a grant or for marriage, communicate effectively.

You only have one chance to make a first impression, whether that’s stepping out of the night-one limo or writing out the first words of your cover letter, so make it count! Minimize the jargon – you don’t want the funder to feel blindsided and not understand (or anticipate) your proposal. Don’t send a proposal if a funder isn’t accepting new ones, and keep the language accessible without using clichés or erasing nuance – you want the funder you’re courting to be on the same page as you!

Despite very different end goals, both nonprofits seeking a grant and Bachelor contestants competing for a date card are driven by compelling narratives. Circumstances will dictate whether that means sharing a difficult personal story for the first time as you compete for the Bachelor’s heart, or describing the hardships faced by the people your organization serves, but either way, you should avoid leading exclusively with pathos to get your point across. To be holistically persuasive, appeal to the ethical nature and logistical side of the Bachelor (or funder). You’re here for the right reasons – make sure they know!

2. Get nerdy and do your research: prep yourself for meetings with producers (or program officers).

You already know that the way you approach people doesn’t go unnoticed. Program officers hold sway with the funder’s board and can give you the Villain Edit™ if you’re unprepared for your meeting with them, don’t understand how their funding objectives fit in with your work, or make any other preventable errors. Enlist any help you can get in doing background research on the season’s Bachelor (or prospective funder), and watch it pay off (literally).

3. Be your best self with other contestants (or fellow nonprofits).

Whether you’re in a grant desert and thirsting for funding or starved for attention from the season’s lead, you and your peers need each other to survive. Other nonprofits will be valuable allies for you, whether that’s writing letters of recommendation or serving as fiscal sponsors for each other. Other contestants aren’t enemies – you never know, someday you might find yourself doing #sponsored content together on social media or partnering on an event.

In short, you have a lot in common with your would-be competitors, so build healthy and positive relationships with one another and don’t let anyone or anything pit you against one another – even though you’re competing for the same thing. (It almost makes you wonder if the system is what needs changing…)

4. Prepare for the worst; expect the best; and if you fail, try again later.

If you compete for the final rose (or grant) and don’t win, make sure that you have a backup plan and are prepared to fire up the Instagram marketing career (and by that, we mean other grant applications and maybe your reserves).

Being resilient is also a hugely helpful quality, whether you’re approaching a funder or #BachelorNation. Don’t write off reapplying to the same funder (or franchise) later on, either – if they have multiple deadlines per year, maybe you’ll have better luck Baywatch-running to the funding finish line across the Grant Proposals in Paradise beach or skimming down the snowy slopes of the Grant Proposal Winter Games!

Happy rose-hunting. May the odds be forever in your favor.