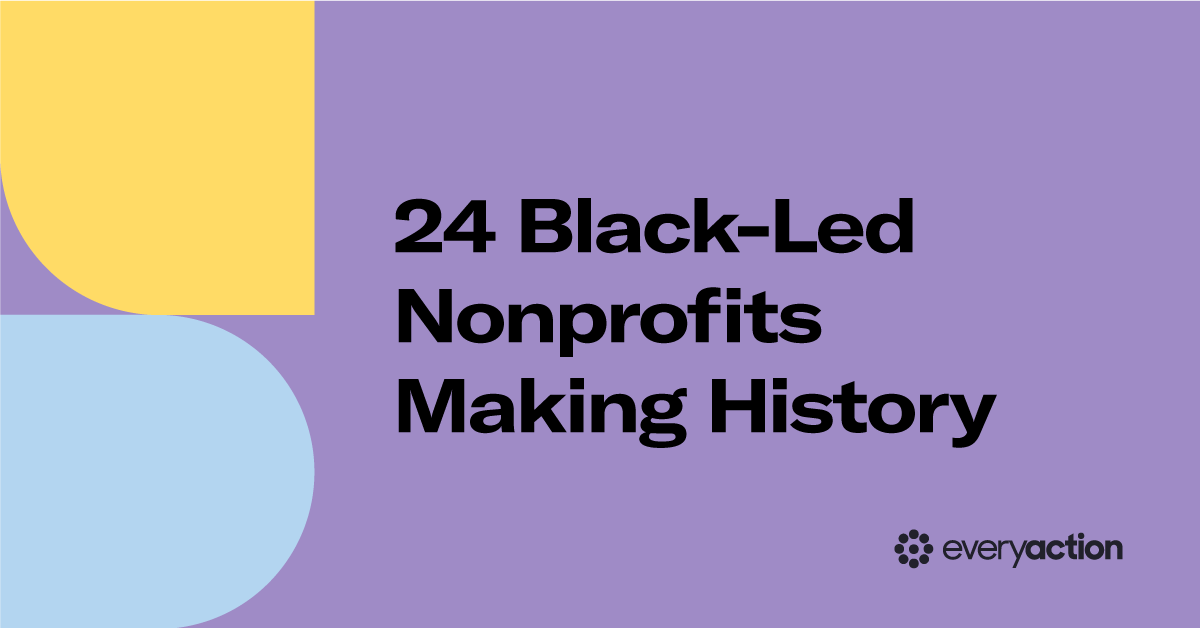 The origins of Black History Month can be traced back to the early 20th century. The Association for the Study of African American Life and History (ASALH), founded in 1915 by historian Carter G. Woodson and minister Jesse E. Moorland, sponsored the first national Negro History Week in 1926. Decades later in 1976, President Gerald Ford officially recognized Black History Month and called upon the public to “seize the opportunity to honor the too-often neglected accomplishments of Black Americans in every area of endeavor throughout our history.”

Take the time to honor and celebrate these 22 local and national Black-led nonprofit organizations during Black History Month and beyond.

1. Association for the Study of African American Life and History

The Association for the Study of African American Life and History (ASALH) was established on September 9, 1915, and seeks to honor the legacy of the founder of Black History Month, Carter G. Woodson. ASALH’s mission is to “promote, research, preserve, interpret, and disseminate information about Black life, history, and culture to the global community.” This nonprofit organization operates local, state, and international branches to spread this information.

Founded in 2006, the African American Leadership Forum (AALF) works towards its mission of improving the lives of African Americans in Minnesota. This organization is comprised of over 1,500 African Americans who self-identify as thought leaders, influencers, builders, and ambassadors. These leaders volunteer their time, talents, and financial resources to build a just society for everyone.

The African American Roundtable (AART) at CLGS aims to mobilize Black communities of faith to support the LGBTQ+ community and “seeks the full inclusion of black lesbian, gay, bisexual, queer, and transgender people in communities of faith.” AART hosts live workshops, symposiums, and panels to foster dialogue about the intersections of faith, gender, and sexuality between Black church leaders and their congregations and the Black LGBTQ community.

Black Lives Matter (BLM), one of the most prominent Black-led nonprofit organizations, was founded in 2013 as a response to the acquittal of Trayvon Martin’s murderer. BLM’s vision is to eradicate acts of violence inflicted on Black communities “by combating and countering acts of violence, creating space for Black imagination and innovation, and centering Black joy.” BLM works to be expansive and inclusive, centering those who have historically been marginalized within Black liberation movements.

This organization, founded by W. Mondale Robinson, describes its mission as “increasing the number of Black men that are super voters.” The Black Male Voter Project is the only national organization that focuses exclusively on the voting habits of Black men. The organization focuses on 17 priority states, launching campaigns like phone banking and peer-to-peer texting to encourage Black men to regularly and actively engage in voting.

6. Black Organizing for Leadership and Dignity

Black Organizing for Leadership and Dignity (BOLD) is an African American-led nonprofit organization focused on transforming the practice of Black organizers in the U.S. to increase their alignment, impact, and sustainability to create progressive changes. BOLD carries out its mission through training programs, coaching, and technical assistance for BOLD alumni and partners.

BlackPAC is an independent, Black-led nonprofit organization that works to change existing social and political systems through political engagement. To accomplish this mission, BlackPAC helps motivate Black voters to go to the polls and elect political candidates who are willing to make those changes. BlackPAC also holds these politicians accountable for creating policies to defend rights, promote dignity, and end white supremacy.

Black Women for Wellness “is committed to the health and well-being of Black women and girls through health education, empowerment, and advocacy.” This organization began as a grassroots program to protect Black children and mothers and became a nonprofit organization in 1997. Today, BWW has services centered around community connection, outreach and education, and policy work in reproductive justice, community research, and environmental justice.

Black Women’s Blueprint, Inc. is a civil and human rights organization of women and men who take action to secure social, political, and economic equality in American society. The organization works to develop a culture in which African American women are fully empowered and gendered and racial disparities are erased. They engage in progressive research and historical documentation, support movement building, and organize on social justice issues steeped in the struggles of Black women.

The Center for Black Equity (CBE) is an institution committed to supporting leaders, institutions, and programs for health, economic, and social equity for LGBT people of African descent. Since the CBE’s founding in 1999, members have examined and taken positions on the fundamental issues of the day. CBE is driven by its mission to “promote a multinational LGBTQ+ network dedicated to improving health and wellness opportunities, economic empowerment, and equal rights.”

The Congressional Black Caucus PAC (CBC PAC) works to increase the number of African Americans in the U.S. Congress, support non-Black candidates that champion aligned interests, and promote African American participation in the political process. While the Congressional Black Caucus is currently the largest it has ever been, CBC PAC continues to work to amplify key issues. It is their hope to meet the needs of every American by supporting representatives that serve Black communities.

The DuSable Museum of African American History is the first nonprofit museum “dedicated to the collection, documentation, preservation, study, and the dissemination of the history and culture of Africans and African Americans.” The museum has over 15,000 pieces, including paintings, sculptures, and historical items. The museum strives to be a point of connection by representing America’s historic divisions.

Higher Heights for America is “the only national organization providing Black women with a political home exclusively dedicated to harnessing their power to expand Black women’s elected representation and voting participation and advance progressive policies.” This nonprofit organization, along with its sister organization Higher Heights Leadership Fund strives to create an environment in which Black women are empowered to run for government office, win elections, and become leaders.

The National Association for the Advancement of Colored People (NAACP) is the largest black-run nonprofit organization in the country with well over two million activists. NAACP’s mission is to secure the political, educational, social, and economic equality of rights in order to eliminate race-based discrimination and ensure the health and well-being of all persons. NAACP uses its 112 years of experience to amplify Black excellence and meet the needs of Black communities.

The National Black Women’s Justice Institute (NBWJI) works to reduce racial and gender disparities across the justice continuum affecting Black women, girls, and their families. The NBWJI’s guiding principles are to ground its work in data, use an intersectional framework for race and gender equity, elevate and amplify community expertise, and provide healing to those affected. According to NBWJI, real justice is healing.

The National Congress of Black Women, Inc. (NCBW) is a 501(c)(3) nonprofit organization driven by a vision of a world in which Black women can experience equality in every area of their lives. NCBW’s mission is to “vigorously advocate for equality and empowerment of Black women, their families, and communities throughout the nation and around the world.”

The Samuel DeWitt Proctor Conference, Inc. (SDPC) represents a cross-section of progressive African American faith leaders and their congregations in the United States. Founded in 2003 as a 501(c)(3) organization, the SDPC was called into being to continue the rich legacy of the faith community’s engagement in issues of human rights and social justice. By bridging the gap between prophetic preaching and true social activism, the SDPC works to create hope in action, justice and equity, and human rights for all.

Founded in 2017, Black Visions Collective works to build a political home for Black communities in Minnesota. Black Visions Collective centers its work on “healing and transformative justice principles, intentionally developing their organization’s core DNA to ensure sustainability, and develop Minnesota’s emerging Black leadership to lead powerful campaigns.” Their goal is to create movements that can sustain long-term success and transformation.

Formerly known as Action PAC, the Grassroots Law Project is a political organizing force working to combat racism and bigotry in the United States. More specifically, the Grassroots Law Project aims to stop police violence and mass incarceration by targeting the systems that enable these issues. Their work revolves around dismantling structures of power like white supremacy and police corruption and replacing them with “something imaginative and redemptive.”

These organizations are doing critically important work to serve their communities. Take the time to support them with donations, volunteer efforts, and other contributions during Black History Month and beyond.