Client Story: How Anera Made the Switch to EveryAction 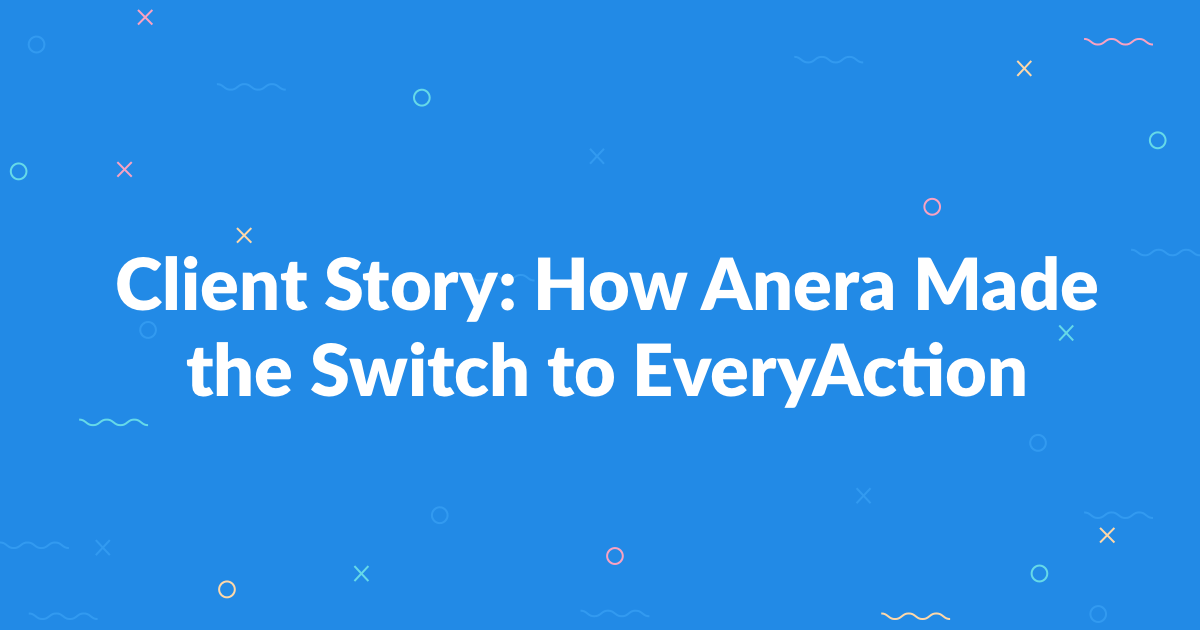 Anera’s mission is to provide humanitarian assistance and sustainable development to advance the well-being of refugees and other vulnerable communities in Palestine, Lebanon and Jordan. Since 1968, Anera (American Near East Refugee Aid) has helped those hurt by conflicts in the Middle East live with dignity and purpose – specifically by working on the ground and mobilizing resources around emergency relief, as well as long-term projects in areas of health, education, and economic development. In 2019, they delivered nearly $49 million in programming to their target regions. Anera’s staff does work in the field out of offices in Akkar, Amman, Beirut, Beitin, Bekaa, Gaza, Jerusalem, Ramallah, South Lebanon, and Tripoli; they also maintain a U.S. office in Washington, DC.

The Communications and Data Systems Challenge

In 2019, Anera was focused on growing their programs, but were struggling with legacy data and communication systems that weren’t reliable. Those digital tools – like online fundraising, event management, and email marketing – were starting to show their age. Building forms and email took too much time and effort.

Anera’s Director of Digital Fundraising, Christina Schnoor, explained that her team spent countless hours troubleshooting their department’s database tools. Her team was especially dissatisfied with their reporting capabilities. Data hygiene was a never-ending task, and it proved difficult with Anera’s small headquarters of about 20 staff located in DC – seven of whom were in fundraising.

Anera’s New Business Development team was still using Excel sheets to track their grants application progress, which was taking away valuable staff time. Plus, Christina was frustrated at the amount of time it took to do simple tasks like creating audience segments and setting up email templates.

Christina hired an independent nonprofit technology consultant, Maureen Wallbeoff, to review their existing systems, learn how they were being used, and advise on new software solutions.

Christina and her team concluded that Anera’s existing database setup was taking too much of their time away from focusing on strategy. Anera needed a tool that would better suit their staff size and have the capabilities they needed to engage properly with supporters and coordinate their work around the globe.

According to Christina, “It became clear to me that whichever database we chose, it needed to be powerful enough to meet multiple needs. I knew what I required out of a system as a digital fundraiser, but I wanted to make sure it functioned well enough to complete my colleagues’ tasks. And, most importantly, we needed a database that didn’t require a lot of time to learn it.”

Maureen Wallbeoff interviewed the staff to uncover areas of duplication, gaps, and workarounds. She collected functionality and business process requirements from every team, performed market research, and ultimately recommended four potential replacement systems to the Anera team. Representatives from each Anera team attended product demos and debrief meetings to get a feel for the products.

As Christina and her team went through the demo process, one stood out the most – EveryAction. It had all of the functionality her team and the finance team needed and, most importantly, a better reporting tool.

Anera made the switch to EveryAction in late 2019. With EveryAction, they no longer stress over integrations, and are constantly impressed with the level of dialogue EveryAction has with their clients to make constant improvements to the system. Christina and her team are delighted with how user-friendly and visually organized EveryAction is, and after only a few months, they find themselves much more productive. The sales process was easy and open, and Christina was able to select just the right level of migration support as she and her team made the switch.