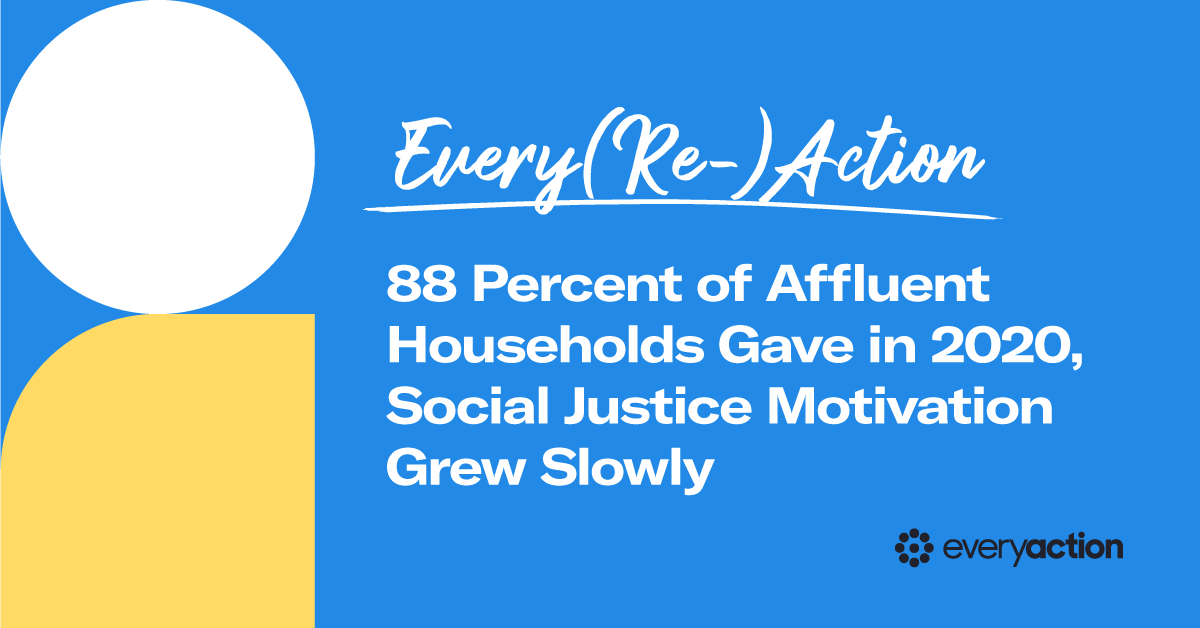 Affluent households gave at high rates in 2020, and report slowly-increasing motivation from social justice issues to make gifts — those are two highlights from a new report jointly produced by IUPUI’s Lilly Family School of Philanthropy and Bank of America.

Some of this report’s top-line findings included:

“This study,” says the introduction, “is a continuation of the 2006, 2008, 2010, 2012 Bank of America Study of High Net Worth Philanthropy and 2014, 2016, and 2018 U.S. Trust® Study of High Net Worth Philanthropy research series.” A 123-page report, it covers both existing and new areas. Existing areas included “giving patterns; perceptions; motivations; decision-making; strategies; values; traditions; volunteering; donors’ contributions to political candidates, campaigns, and committees; perspectives on ways to achieve social impact; and demographic dimensions,” while new areas covered included “a special section on affluent households’ experiences during the COVID-19 pandemic and charitable relief efforts, donors’ contributions to affinity groups and social/racial justice issues, and affluent households’ use of qualified charitable distributions.”

The report’s methodology was explained as follows:

“The study is based on a survey of 1,626 households with a net worth of $1 million or more, excluding the value of their primary home, or an annual household income of $200,000 or more. The median income of survey participants was $350,000, and the median wealth level was $2 million.”

Affluent households were roughly twice as likely as the general population to give to charity in 2020. Given the levels of unemployment faced by so much of the U.S. in 2020 — up to 14.8% in April 2020, “the highest rate observed since data collection began in 1948” according to the Congressional Research Service — we can make a few guesses as to why the general population refrained from giving at the same rate as affluent households.

On the flip side, when asked why they did not give to charity in 2020, affluent households were most likely to give these reasons, out of a total of 12 options:

Some of the other, less common reasons affluent households reported for not giving included:

Many of these less-common reasons for not giving are great opportunities for nonprofits to learn how these donors would like to be engaged. For example, the knowledge that nearly 22 percent of affluent households decided against giving due to a lack of connection to an organization might drive nonprofits to invest more resources in supporter acquisition and long-term engagement in order to build connections with affluent donors. Nonprofits might also decide to communicate early and often about planned giving for that 10 percent who plan to do all of their giving at the end of their lives. Organizations might also survey their supporters to learn more about what kinds of messages supporters want to hear and when, and they might also look inward to determine which seasons, days, and times are right for targeting different donor audiences with different messages across different channels. Lastly, creating a giving experience that is smooth and straightforward can create a path for donors to give generously — tactics like automated gift acknowledgments and self-service pages can help donors feel at home while making a donation, and play a part in donor retention.

To gauge donors’ motivations for giving, respondents were posed the question “How often do you generally give…?” and offered ten reasons. Respondents could then choose to respond in three ways to each of the ten options: “never,” “sometimes,” and “always.”

Among the reasons affluent donors reported “always” drove their giving were:

On the other hand, the 3 most common reasons many donors said were “never” why they gave included:

It’s striking that these donors were about as unlikely to be moved by the promise of a tax benefit as they were by social justice. Although nearly 40 percent said that a desire to support social justice was “never” a driver of giving for them, affluent donors’ affinity for social justice issues has apparently changed slightly over the past three years. As the report’s Overview called out:

An important finding is that issue-based philanthropy is becoming increasingly important to affluent households, as practically the same proportion indicated that issues most drive their giving decisions and/or strategies (43.6 percent) compared to organizations (44.5 percent). This is a departure from previous studies, where clear majorities of affluent households indicated that organizations drove their giving decisions and/or strategies.

We know that most donors who build long-term relationships with nonprofit organizations feel a deep connection to the mission, so it’s unsurprising that nearly 60 percent of affluent donors report that as “always” driving their giving. Obviously, as a proud partner to many social justice organizations, we’ll be very interested to see whether urgent social and racial justice issues continue to become a stronger motivation for giving in the future—and whether that motivation becomes stronger at a faster rate.

We’ve learned from our network effect that volunteers are twice as likely as non-volunteers to make a donation. That kind of positive correlation seems to hold true in the report’s findings about affluent volunteers: although their overall volunteering was down in 2020 from 2017, “on average, affluent individuals who volunteered gave more than twice as much ($20,838) as those who did not volunteer ($9,047.)”

The top three activities that affluent households reported for 2020 were:

Again, social justice actions lagged behind, with about 10 percent of respondents reporting volunteer participation in “advocacy or activism” in 2020.

Interestingly, the report notes, about one in five volunteers said they participated in virtual volunteering during the COVID-19 pandemic. We know that the Delta variant has driven organizations to re-evaluate their in-person events strategy as of late, and this report’s finding about virtual volunteering reinforces the importance of flexibility and accessibility wherever possible in nonprofit events and activities.

In person or online, respondents overwhelmingly reported that they volunteered as a solo activity — over 70 percent chose “on [their] own,” which is more than twice the number of respondents who volunteered with friends, family, or their workplace.

We’ve learned from our Mobilize network that when it comes to volunteer recruitment, the registration process can make or break your program, so nonprofits should make sure to automate as many messages as possible and streamlining the process. A smooth experience can make it more likely that your volunteers will spread the word about your program — a goal that’s worth aiming for, since we know that more than 20 percent of supporters who have taken action through Mobilize have come from one of our bring-a-friend features, and almost 40 percent of supporters have taken action with the same people multiple times.

Mixing and matching the right strategies for acquiring, engaging, and retaining affluent donors and volunteers can sound complex, but with support from the right platform, it doesn’t have to be. In a highly-integrated or unified platform, you can know a supporter in their full glory, and send them the right messages, in the right channels, at the right time. Stay tuned for part 2 in this blog series breaking down this report, and in the meantime, talk to us to learn more.