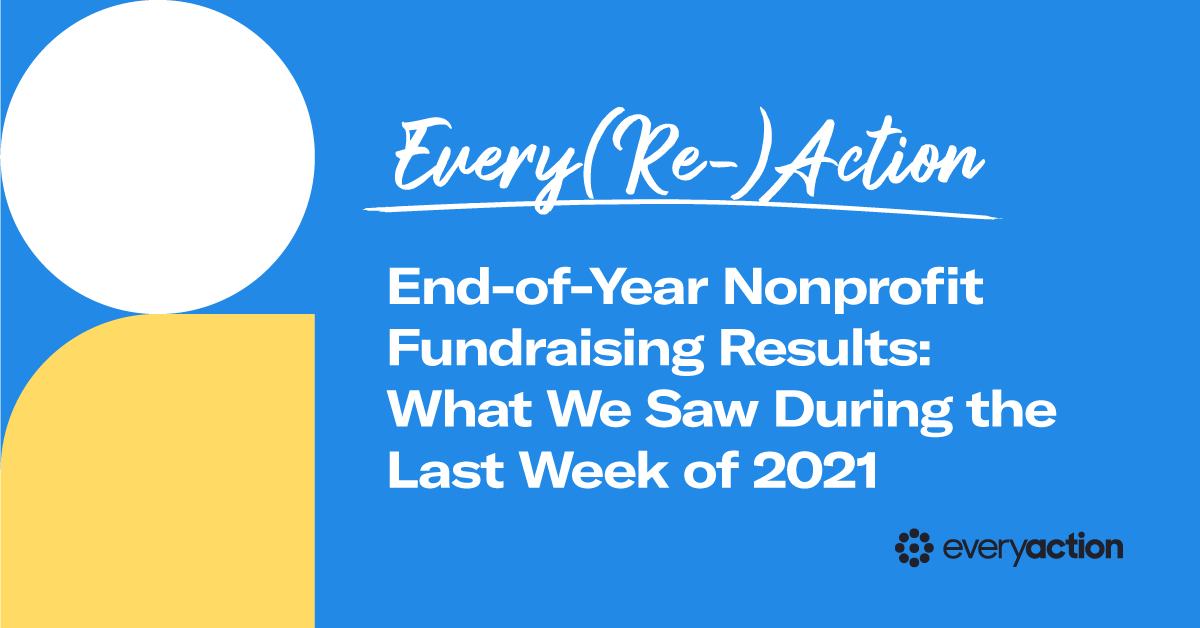 The big results? Between December 25 and 31, organizations on the EveryAction platform:

What do these results mean when broken down? And what could they signal for the coming year? Let’s dig in.

Between December 25 and 31, EveryAction clients sent almost 549 million emails—but their single-day statistics were pretty impressive, too. For the second time in a little more than a month, EveryAction clients broke our single-day email send record. They sent a record 149 million emails on GivingTuesday 2021, but they quickly smashed that record on December 31, 2021 by sending 153.3 million emails. It’s clear that nonprofits are continuing to make the most out of their email channel to remind donors about opportunities to give on important days, especially when time is of the essence.

Take action: you already know that what gets measured, gets moved—and Apple’s email privacy update has driven organizations to re-evaluate how to measure the success of email programs. Nonprofits who take these action steps now can start 2022 ready to measure and improve on their email program successes of 2021.

Nonprofits dispatched hundreds of thousands of SMS messages over the last week of the year. As it was with email, the day with the most SMS sends was December 31; however, SMS seemed to diverge from email’s relatively steady upward trend in send numbers between December 25 and 31. Organizations sent nearly 89,000 SMS messages on December 31, but the day with the second-highest number of messages wasn’t December 30—it was December 28, which saw over 74,000 texts going out.

SMS is growing in popularity as a channel thanks to its high click-through rates and ability to reach supporters anywhere—especially when they may have traveled away from their current mailing address for the holidays, or, if they’re lucky, they may have taken a vacation from their email! We’ll be interested to see how organizations grow their use of mobile messaging in 2022.

Take action: for your supporters, opening your SMS message is just the first step—chances are, you sent your supporters an SMS because you want them to click through and complete a gift or an advocacy action. Enabling functionalities like one-click donations and prefilled forms can make it easier for your audiences to take action on behalf of your mission.

Between December 25 and 31, we saw organizations process over $60 million in funds from online donations on the EveryAction platform. During this week, their single most lucrative fundraising day was December 31—when organizations raised $25 million. That’s over twice as much as they raised on their second-most lucrative day in the final week of 2021: on December 30 organizations raked in over $12 million. Clearly, donors are responding to nonprofits’ time-sensitive asks and see the benefits to making a gift before the year is over, and we’ll be curious to see how organizations continue to build support over the coming year.

Take action: whether your year-end campaigns helped you acquire new support or retain existing donors, it’s important to steward those connections as you begin a new year. Workflow automation can help ensure every audience member who supported you receives accurate and timely asks at the right time all year round.

Although the day of December 31 saw the most donation activity, peak donation hours fell during the evening hours like they did for GivingTuesday 2021—both in terms of the number of gifts processed and in the amount of funds raised. In order, the top four hours when the highest number of gifts rolled in were 6:00pm, 8:00pm, 7:00pm, and 9:00pm, and organizations also raised the highest amount of funds during the 6:00pm hour. Knowing these data points is important for fundraisers since scheduling and sending messages through the right mix of channels is how organizations can most effectively connect with donors, raise the most funds, and create the deepest impact.

Take action: fundraisers know how important it is to send the right donors the right messages at the right times—but it doesn’t stop there. Customizing and personalizing your asks with predictive analytics capabilities like Optimized Ask—the way SOME and Habitat for Humanity of Omaha have—can help you ensure you’re sending appropriate and appealing gift amounts to each one of your supporters—all without needing to do more manual work.

Running an efficient and effective year-end campaign across channels shouldn’t require more work. Talk to us to learn more about how the right purpose-built platform can help you acquire, engage, and retain more supporters, and raise more for your mission.