Every(Re)Action | Getting Your Share of $9 Trillion: The Agitator on Planned Giving 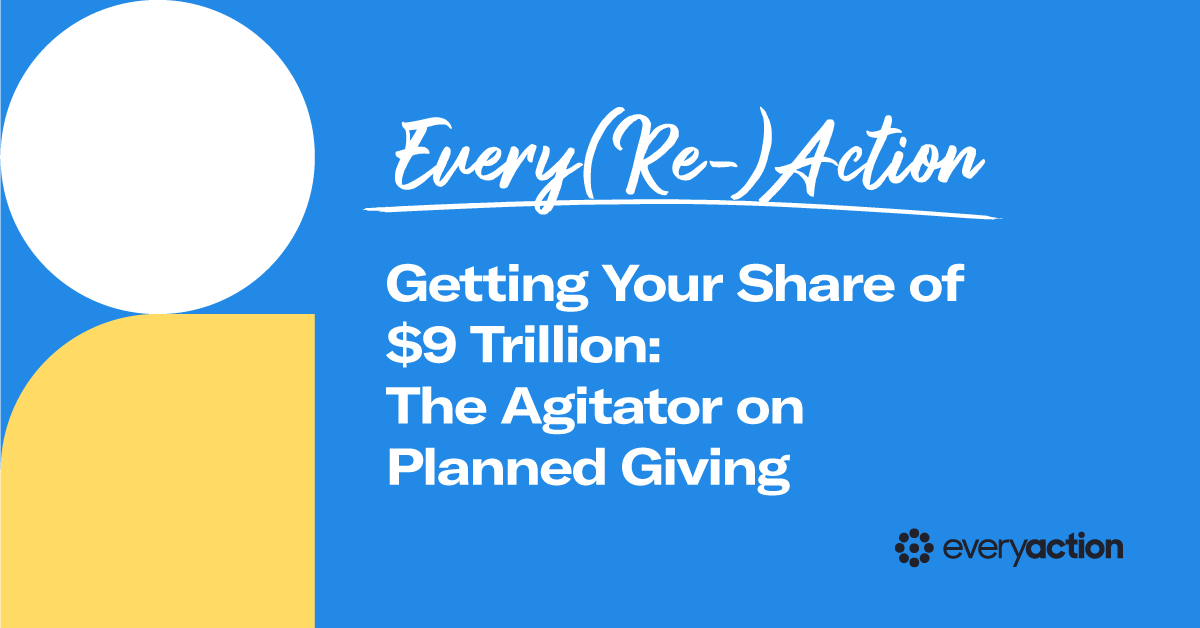 The Agitator’s Roger Craver has published a round-up of resources for fundraisers who want to take a golden opportunity to transform their Planned Giving programs. Now is the time to act, says Craver: many nonprofits are looking to address the vanishing donor problem we wrote about last week, and bequest giving is one smart strategy as Baby Boomers and Greatest Generation members plan their estates.

For more than 30 years fundraisers have known that the greatest wealth transfer in modern history is underway as the World War II generation (those born before 1949) and more recently the Baby Boomers (those born between 1949 and 1962) near the end of life.

A few facts from this WSJ piece:

This is a once-in-a-generation fundraising moment. To make sure nonprofits can work with their donors at this watershed moment, Craver recommends diving into essential Planned Giving skills.

To discover how fundraisers can use direct response techniques and major gift strategy to yield unexpectedly large gifts from otherwise ordinary donors, Craver’s recommended reading includes Iceberg Philanthropy: Unlocking Extraordinary Gifts from Ordinary Donors (Fraser Green and Beth McDonald) and You Can’t Take it With You: The Art and Science of Legacy Fundraising (Green and McDonald, and new co-authors Holly Wagg and Charlotte Field.)

If your nonprofit’s fundraising staff are looking for “guidance that you can—and should—put to work immediately for your own organization,” Craver’s top choices are Don’t Lead with Death and Legacy Fundraising: The Best of Times or The Worst of Times? (both by Dr. Russell James III and Michael Rosen.) Other recommended reading by Michael Rosen includes Donor-Centered Planned Gift Marketing and Michael Rosen Says…, Rosen’s own fundraising blog.

“People give $20 for the same reason they leave you in their will,” notes Craver. “There is a part of them connected to your mission.” That’s why Craver recommends this video from DonorVoice’s own Chief Behavioral Scientist, Dr. Kiki Koutmeridou — fundraisers can learn how to “segment legacy giving and market it to create intention, activate it, and maintain it; how to speak to supporters with kids; the importance (or not) of age; and ways to measure the likelihood of a donor making a planned gift.”

Lastly, if your organization has had lingering doubts about the ethics of asking for planned gifts during a pandemic or an economic downturn, Craver recommends Ethics of Legacy Fundraising During Emergencies, a report from fundraising think tank Rogare. (Spoiler alert: we already know from Fundraising Effectiveness Project data that overall giving grew by nearly 11 percent in 2020, and the first quarter of 2021 showed a 10 percent growth in donors, among other results.) Put simply: the only way to guarantee your organization won’t raise more money is to stop making asks entirely.

Our Take on Planned Giving

$9 trillion is a massive amount of funds—and a massive planned giving opportunity. Now is the time to get to know the folks next in line for this fortune: for starters, the way younger generations define charity impact differs from older generations, and affects how they interact and build trust with nonprofits. There’s also a growing movement of wealthy Millennials who are increasingly focused on redistributing and spending down their wealth.

These findings about Planned Giving reinforce the importance of truly getting to know your donors, and building relationships with them by sending them the right messages at the right time.