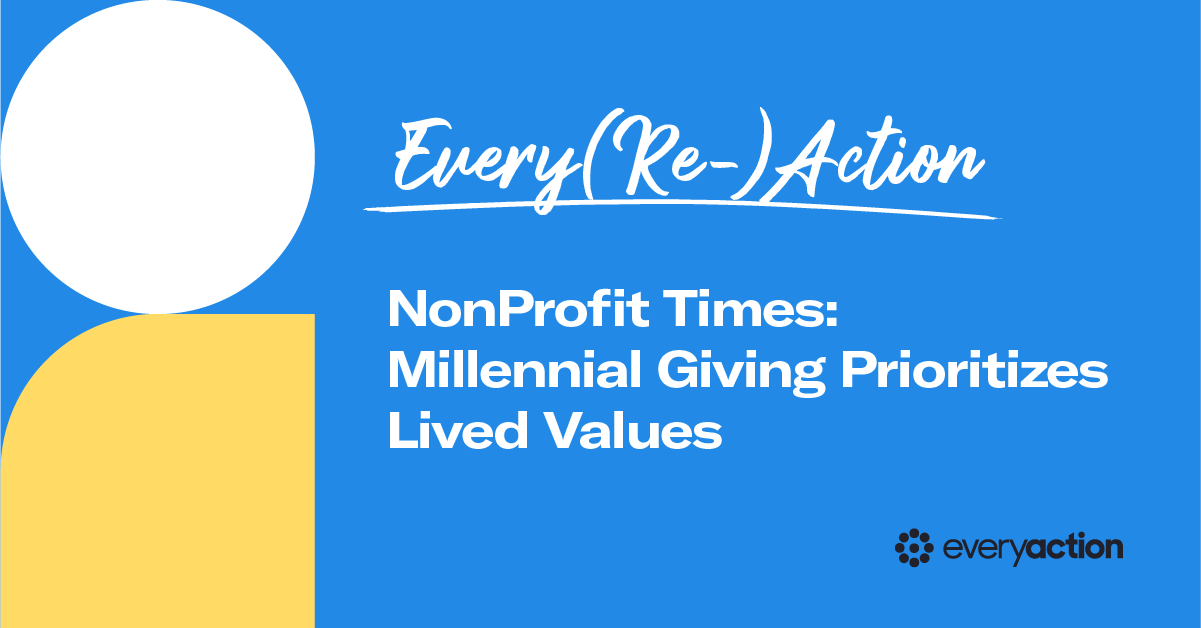 Fidelity Charitable has released a new report, says the NonProfit Times, about the Millennial approach to giving back. Their Future of Philanthropy report key findings reinforce what we know about socially-conscious Millennials: in Fidelity’s words, “charitable giving is becoming charitable living.”

One of the largest donor-advised fund administrators in the United States, Fidelity Charitable oversees billions of dollars in donor-advised funds and granted out over $9 billion in 2020. Their report defines Millennials as anyone born between 1981 and 2000, and included results analyzed from two surveys (one sent in March 2020, one in January 2021) of adults who had donated a minimum of $1,000 the previous year.

Financial Gifts vs. Other Support

While there’s obvious value in financial gifts to nonprofit organizations, supporters and activists can also very effectively give back in non-monetary ways. Millennials in particular express their relationship to social good in ways that expand beyond donating and differ from past generations—according to the NonProfit Times:

These findings set Millennials apart from donors as a whole—only half of donors reported buying from a socially-responsible business; 20 percent “considered social or environmental implications when making investments;” and 70 percent “believe it is important to work for an organization that engages in socially responsible actions.”

Not only do Millennials appear more committed to giving and acting in alignment with their values, they’re also willing to withhold support from organizations that don’t keep their promises or embody their stated values. “With Millennials, their values are more important than a specific nonprofit brand,” says NonProfit Times. “A nonprofit that fails to live up to their values, or that is seen as out of line either due to organizational or individual missteps, runs the risk of losing Millennial support more quickly than among older cohorts.”

All of these findings suggest Millennials see their commitment to social good as less tied to transactions and more connected to a lifetime of values-based choices and behaviors.

Giving Inside and Outside the 501(c)3 Sphere

Findings about Millennials’ tendency to center values over specific organizations fits in with the report’s findings on how Millennials do and don’t take action via traditional nonprofit routes.

On social media, “Millennials have embraced the power of their voices,” says Fidelity. “Every post and interaction is an opportunity to plug in to something bigger and make more of a difference.” Among Millennials, Baby Boomers, and Gen X, Millennials are most likely to be influenced by peers in their giving and advocacy choices:

Millennials are also more likely to donate directly rather than through traditional nonprofit channels—and while Fidelity requires grants from their donor-advised funds to disburse to registered 501(c)3 organizations, they admit that direct giving is “one of the most tangible ways to provide help and support to someone in need.” 57 percent of Millennials have “donated to individuals through an online giving platform” like GoFundMe, and 64 percent have given money directly to an individual.

Millennials even take a different view of the term ‘philanthropist’ than do older generations. As Fidelity Charitable president Pamela Norley put it:

It’s clear that Millennials’ futures as changemakers include many forms of taking action for a mission—they don’t just want to feel good, they want to do good. That means nonprofits who want to partner with this generation of supporters must focus on building authentic connections, and then steward them along their preferred paths of engagement with an eye toward retention.

Whether you meet a new Millennial supporter through a volunteer opportunity, an advocacy opportunity, a community-centered Giving Day event, or elsewhere, your strategy should help you build a long-term relationship with them to advance your mission together. Download our eBook to learn more about how to steward and retain supporters who came in through these different avenues.