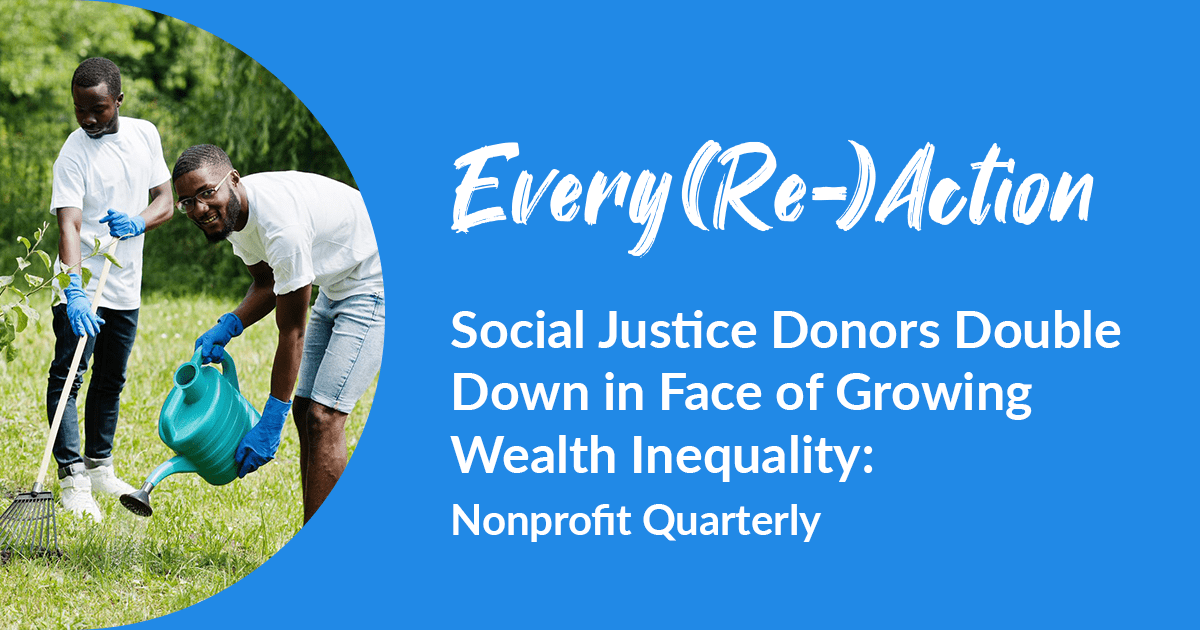 Nonprofit Quarterly has reported that growing wealth inequality in the United States is driving some wealthy individuals to renew their efforts to give away resources—and EveryAction client Resource Generation is one organization leading the charge.

“Even as US households in the bottom quartile have faced mass unemployment (above 20 percent),” says Nonprofit Quarterly, “the Dow Jones [in April] briefly passed a record 34,000. Many among the wealthy have held onto their gains, but some have been galvanized by the crisis to step up.”

One well-known campaign to ask wealthy individuals to make sizeable gifts is the #HalfMyDAF campaign. As fundraisers know, DAFs (or donor-advised funds) are differentiated from more traditional foundation structures in that they lack a legal mandate to annually pay out a percentage of funds, and are often held by individuals, creating more flexibility for fund advisers. The #HalfMyDAF campaign was initiated by David and Jennifer Risher in May 2020 “to encourage donor-advised fund (DAF) holders to distribute at least half of their DAF holdings to nonprofits by September [2020,]” and included the promise of matching up to $1.4 million in gifts to help encourage donations. After relaunching the #HalfMyDAF campaign in 2021, their goal rose to $20 million in DAF disbursements.

Resource Generation, Nonprofit Quarterly says, has also answered the call to donate wealth in the face of the widespread suffering and unrest. Founded twenty years ago, RG “organizes young people with wealth and class privilege in the U.S. to become transformative leaders working towards the equitable distribution of wealth, land and power,” and established the Redistribution Pledge to meet that goal. Per Nonprofit Quarterly:

In 2020, RG members donated about 3.6 percent of net assets. Relatively speaking, that number is high. By comparison, a report based on 2018 data of America’s top ten billionaires found that the average billionaire donated only 0.94 percent of net assets. But still, RG members believe they can do better[…] RG has pledged to “move boldly around investments as a complementary strategy to social justice philanthropy” with the aim that members will invest a sizeable amount of that $1.8 billion-plus in member assets in alignment with their social justice goals[…] and transformative investment principles, announced [in April 2021.]

As more and more donors and funders raise their hands and seek to move their wealth toward the major issues of our time, nonprofits doing that critically important work need an effective way to track and maintain relationships with those partners—without creating more work for themselves. We’re delighted to call Resource Generation part of our community, and we know that our purpose-built platform can help organizations spend less time administering a database and more time creating transformative change.