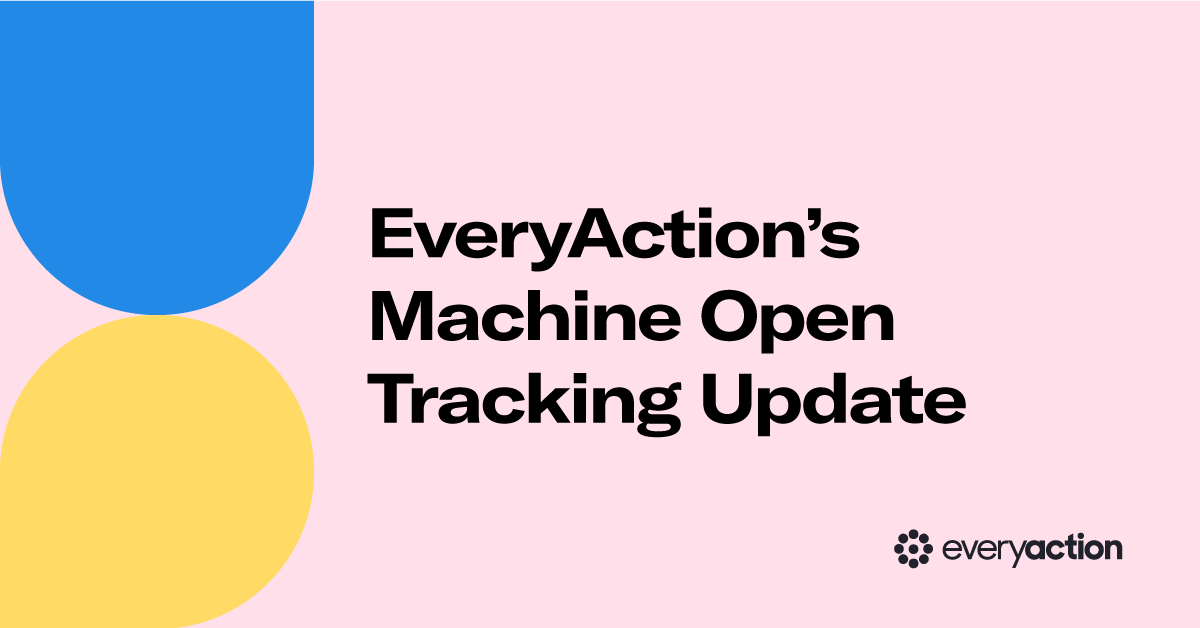 As you might already know, Apple made a number of updates in 2021 meant to protect users’ privacy. One of these updates was their email privacy update. Apple’s native email app (called Mail) now automatically tells email senders that their emails have been “opened”—even if the intended recipient doesn’t manually open an email. This update doesn’t just affect iCloud email addresses, it affects any email addresses accessed through the Mail app, including Gmail, Yahoo, and other providers. Ultimately, if you’re an Apple user, this update makes your behavior harder to track, which gives you an extra layer of privacy.

Although Apple’s update represents an effort to increase their users’ privacy, it also makes it harder for nonprofits to understand who’s actually opening their email content—and that can affect the way you operate your email programs, and measure their success.

Inaccurate open rate data creates a waterfall effect into other data. For example, many organizations use their open rates to determine which email wins an A/B test. However, if you don’t have an accurate idea of who’s really opening your email versus whose emails are just marked as “opened” by Apple, you can’t make an informed decision about which email should win that A/B test based on the open rates you see.

This makes it more difficult to run a successful email program: if you’re not confident about which emails are getting opened, it’s harder to understand how your audiences are responding to your messages or even if they’re reading your content. Difficulty meeting those short-term goals also means it’s harder to reach your long-term goals, like increasing your audience engagement, growing your audiences, or raising more to fund your mission.

What is EveryAction doing to respond to Apple’s email privacy update?

We’re excited to release an update to help the organizations on our platform get a more accurate idea of their open rate in Targeted Email. We call this new metric Machine Opens, and it works by segmenting out Apple’s machine opens from your email reporting to give you a more reliable and actionable open rate.

Right now, Apple is the only company implementing this kind of privacy update—but other companies follow Apple’s lead, and they’re likely to release features like these in the near future. That’s why we took the time to investigate, understand, and respond to Apple’s email privacy update now: a lot of us have been in your shoes and we know your mission can’t wait.

We’re providing this additional metric right now, because instead of showing you email open data that looks good but isn’t ultimately helpful in the long run, your platform should help you move your email programs forward by giving you accurate and actionable data, so you can make good decisions and plan for the future.

How will my open rate change due to machine open tracking?

With Machine Open Tracking in TGE, your overall email open rate will probably decrease, but that’s because it’s showing you a more accurate number.

The reason your open rate will decrease is because opens triggered by Apple’s mail privacy protection program (Machine Opens) will stop showing in the open count. (You can still access your Total Open metrics, which will count both “opens” and “machine opens.”)

Here’s an example of what could happen:

As you can see, this gives you a total open rate of 23 percent.

Outside of opens, what else should I use to measure my email marketing campaigns’ success?

While open rates can be useful, they’re definitely not the only good metrics out there! Your open rate can be a handy metric to use for testing because it’s an early indicator of how well a single email is received, but you’ll still want to measure clicks and conversions in order to capture the success of your emails.

You can still get an accurate idea of who’s clicking your calls to action, even if Apple’s update makes it harder to understand your opens-to-clicks ratio. You’ll also want to pay special attention to your conversion rate—meaning the percentage of your audience who actually made a donation, subscribed to a newsletter, took an advocacy action, or otherwise converted the way you hoped they would. In the long run, these types of actions are more valuable to open rate anyway, because they represent real engagement with your content.

As you’re paying attention to opens, clicks, and conversions, you can also take other steps to ensure success with your email program, like investing in effective and ethical creative; putting less of your content in the body of your email, and more of it on the other side of your call to action; segmenting your audiences and targeting them with personalized messaging; and investing in deliverability can all help you reach your email goals.

Your nonprofit email platform should empower you to understand your programs’ performance, adapt to trends and sector-wide changes, and run more effective and efficient campaigns—talk to us to learn more.