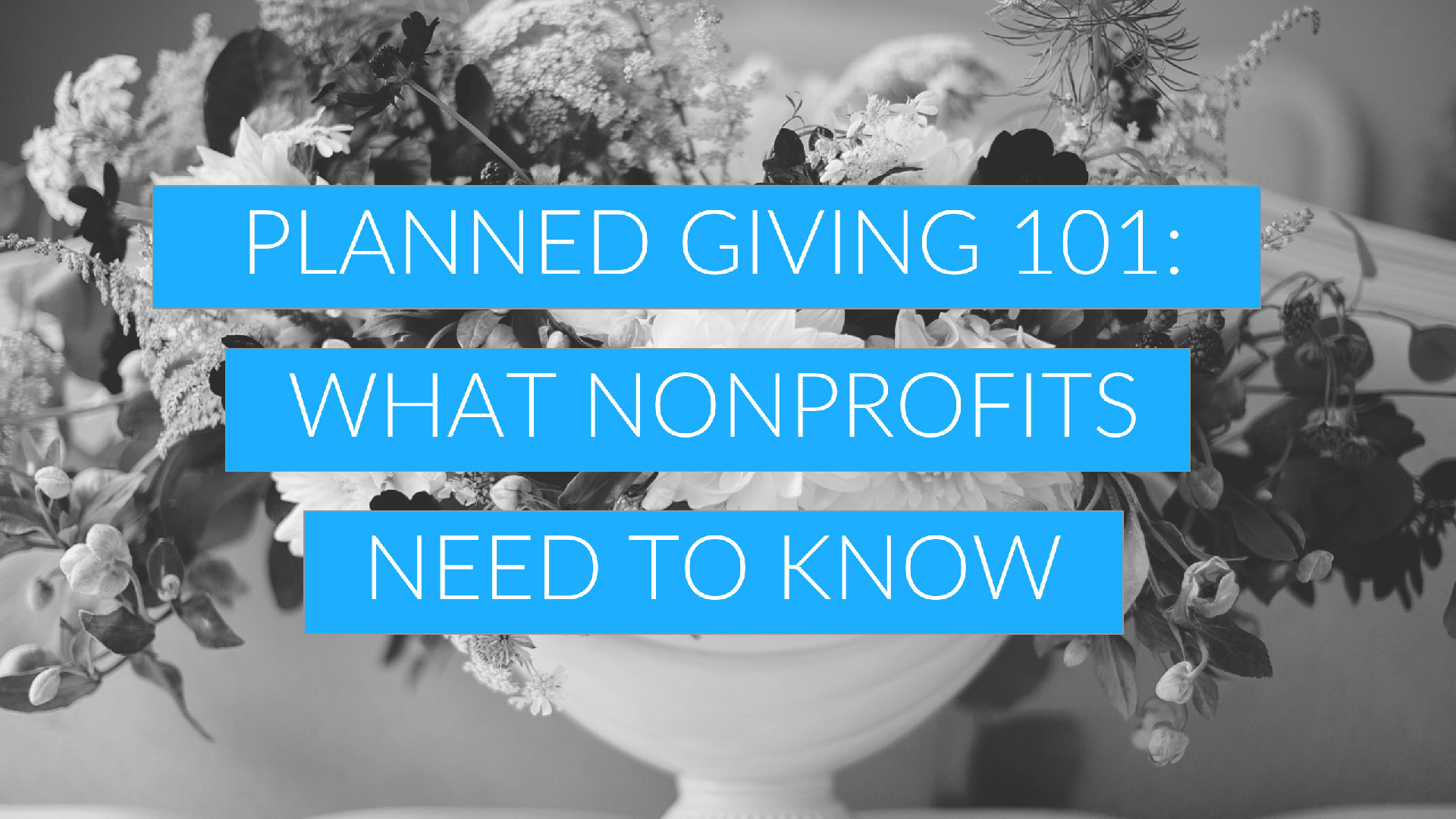 One of today’s biggest areas of growth for nonprofit fundraising is Planned Giving. It is estimated that over the next 25 years nearly $6 trillion will transfer to charitable organizations through bequests, trusts and other planned gifts. Just last year, over $30 billion was transferred via bequests alone.

Because of the unique legal, administrative, and personal aspects of planned gifts, managing the process can be a complicated task for Development professionals, especially without tools that are built specifically for this type of donation. Most nonprofit fundraising databases are able to mark a gift as a bequest, but this only captures a fraction of the entire Planned Giving process. It can take years of careful, personalized cultivation before an individual commits to planned giving, so it is important that nonprofit Planned Giving Officers have access to software that makes it easy to track all of the steps towards securing planned gifts—including big-picture ROI on planned giving marketing efforts as well as relationship tracking and detailed tracking of planned gifts that are made.

If you’re ready to jump right into building a planned giving program for your organization, download our complete guide to success!

What is Planned Giving?

Planned Giving is the process of arranging a contribution that will be allocated at a future date. Most often granted once the donor has passed away, planned gifts are usually donated through a will or trust.

Often alternately known as legacy programs, Planned Giving programs are a means of cultivating strong relationships with planned gift donors and supporting them throughout the complicated process of enacting a planned gift. Planned Giving programs are unique in the world of nonprofit fundraising because of the length of time involved in the gift process, and the fact that multiple contacts beyond the donor themselves are often involved, such as lawyers, estate planners, and other beneficiaries. Such programs involve complicated, long-term efforts to build relationships with donors and manage the legal and financial details of the gift.

The type of relationship and information management required of Planned Giving Officers varies depending on the type of planned gift in question. Planned Giving most often takes one of four forms, bequests, charitable gift annuities, trusts, and pooled income funds.

90% of planned gifts take the form of bequests; legacy gifts left to a nonprofit after a donor has passed away, for which the donation process is relatively straightforward. A donor can make a charitable bequest via a trust, will, or estate plan.

No matter which category of charitable bequest a planned gift comes from, the gift process for a bequest is fairly straightforward. However, it often takes years of cultivation and relationship building before a donor is ready to commit to a bequest.

A somewhat more complicated process, charitable gift annuities are contracts between a donor and a nonprofit in which the donor gives a large amount of money in exchange for the nonprofit’s promise to pay the donor a fixed annual income for life, or some other mutually agreed-upon period of time. During this time, the nonprofit is able to invest the money and grow income through it. Once the pay period ends, the nonprofit retains any remaining funds.

Because charitable gift annuities involve a back-and-forth process that happens over time, they must be thought of as an ongoing event rather than a one-time occurrence.

There are several types of trust, but each share the basic principle that recipients are given a certain amount of money from the trust annually until its completion. These fall into two main categories, Charitable Remainder Trusts and Charitable Lead Trusts.

Charitable Remainder Trusts are irrevocable trusts that pays a specified annual amount to the recipient for life, or another fixed period of time. At the end of the term, the remaining trust assets are transferred to the charity. This type of trust can be structured as either an annuity trust which pays out a fixed amount to the recipient each year, or a unitrust, which pays out a fixed percentage of the trust value which is recalculated annually.

Charitable Lead Trusts are similar to charitable remainder trusts, but annual payments are given to a nonprofit rather than the donor, and the principal reverts to the donor or their designated beneficiaries at the end of the trust term.

A pooled income fund is a trust that is established and maintained by a public charity, and operates similarly to a charitable remainder mutual fund. Individual donors contribute to the fund, which combines them for investment purposes. Each year, the fund’s net investment income is distributed among fund participants, proportionally to their investment. Such distributions occur throughout the donor’s lifetime, after which the portion of fund assets attributable to that donor is removed from the fund and transferred to the organization.

There are three common scenarios where a user would enter Planned Giving information for a donor:

Within EveryAction’s Planned Giving tools, each scenario has a workflow that will create a Planned Giving Plan, as shown below. Selecting the appropriate option will take the user to the applicable workflow, where contact history and tasks for the entirety of the Planned Giving relationship can be viewed.

On a Planned Giving workflow, users can view a progress summary bar at the top of the screen for quick access to basic details such as the type of Planned Giving ask, current status, and lifetime giving history.

In the profile section, users can track a donors relationships, both familial and professional, such as lawyers and financial planners, see full contact history and assign follow-up tasks, and add an unlimited amount of notes and attachments.

Finally, in the gift record, users can easily track and update the amount and status of the gift, the staff members assigned to the project and the point of contact for the gift, and any other beneficiaries, as well as adding notes and uploading files as necessary.

Planned Giving is a growing area of focus for nonprofit fundraisers and donors who wish to leave a legacy in support of the causes that they care about. Planned Giving programs require careful management and execution, but can form a very valuable part of long-term fundraising strategy for nonprofit organizations.

Ready to take the next step and start building planned giving program for your organization? Download our complete planned giving guide to get started!